For more than 2,000 high school seniors, the backyard games, the camps, the parenting, the coaching, the pee-wee games and the Friday night lights all lead up to ink on a dotted line and a Division I football scholarship.

It's at that moment when everything changes, when they go from high-school stars to college athletes, from small-town darlings to big men on campus representing in every way the college paying for their education.

When they leave for practice this summer, most of them will be living on their own for the first time. It's certainly easier to adjust to a new setting when you have a built-in support group, like an entire football team; but with the pressure of an entire college weighing on your shoulders, it evens out.

Students they've never met will whisper as they walk by. Coaches who pretended to be their best friend at their home in December will be chewing them out on the practice field in August.

A few will excel, even thrive, and use it as a stepping stone to the NFL. Some will party too hard, make poor decisions and never reach their potential. Others will find their calling elsewhere and use the invaluable lessons of teamwork, sacrifice and leadership to better society off the football field.

For all of them, it's an invaluable opportunity and an inevitable responsibility.

On Wednesday, everything changes. 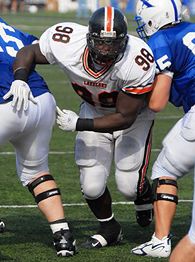 • Florida continues to steamroll toward signing day, nabbing its 12th ESPN 150 commitment this week from DT John Brown (Lakeland, Fla.). Brown joins six other Lakeland teammates in Florida's class, though if he and fellow DT commit Torrey Davis (Seffner, Fla./Armwood) don't get their academics in order, they might have to wait until 2008 to qualify.

The problems and coaching change at Miami, a poor season for Florida State and a national title has created the perfect storm for Florida recruiting. Of the top 15 prospects in Florida who already have announced verbal commitments, eight are headed to Florida compared to one for Miami and none for Florida State; South Carolina has three of the top 15.

• Speaking of Miami, it completed the equivalent of a recruiting trade this week when QB Robert Marve (Tampa/Plant) committed to the Canes this week. Marve de-committed from Alabama after Mike Shula was fired. Meanwhile, QB Nick Fanuzzi (San Antonio/Churchill) reopened his recruitment when Coker was fired at Miami. With Fanuzzi's recent commitment to Nick Saban, Marve completed the swap. Hopefully Saban and Randy Shannon each got the guy they really wanted.

• North Carolina made a big in-state statement by landing DE Linwan Euwell (Pinetops, N.C./Southwest Edgecombe) over N.C. State. Of the top 17 prospects in the state, Carolina has seven commits, compared to just one for State.

• New Stanford head coach Jim Harbaugh might have to lean on his admissions office a little more. Safety prospect Eddie Morgan (McKinney, Texas) was headed to the Cardinal until he was told his SAT scores weren't good enough for admission. Days later, Duke, another top academic school, quickly stepped up, offered Morgan and he accepted.

Henry Gola is the recruiting editor for ESPN.com