Urban Meyer won a national championship in only his second season at Florida, and the Gators have assembled such an embarrassment of talent the past two years that it seems they'll never lose another football game.

Heading into Wednesday's national signing day for college football, Florida has the undisputed No. 1 recruiting class in the country for the second year in a row. The Gators have commitments from a dozen prospects in the ESPN 150, which is tied with Texas for most in the country. Six of the top 50 players in the ESPN 150 are expected to sign with Florida, and the Gators are projected to sign 11 prospects ranked in the top 10 nationally at their respective positions by Scouts Inc. 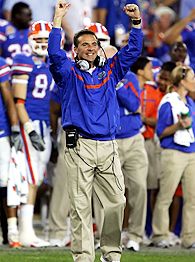 "Am I surprised? No," Meyer said in a telephone interview this past weekend. "I think part of the allure of going to Florida for me was having the opportunity to recruit great players. You should have great players here every year."

But before anointing Florida as college football's next dynasty, Meyer offered these words of caution: The Gators might take a step back before moving forward again. And Meyer warned that the Gators' abundance of young, talented players doesn't guarantee they'll win another championship.

Staying on top in college football, or in the SEC for that matter, is as difficult as trying to corral Gators receiver Percy Harvin on an end around. Only two times in the past 27 seasons has a team repeated as national champion -- Nebraska in 1994-95 and Southern California in 2003-04.

Meyer said the Gators still have plenty to do to reach the stability of those programs.

"It's just our second year," Meyer said. "The teams that reload have been together four, five, six, seven years. Southern Cal kind of ruled the market for a while, and that staff had been together for a long time."

For starters, Meyer must replace many of the best players who led the Gators to the BCS title last season. Only two of the 11 players who started on defense in Florida's 41-14 win over then-No. 1 Ohio State in the BCS title game will return in 2007.

On offense, quarterback Chris Leak, the school's all-time leader in pass attempts, completions and yards, is out of eligibility. So are leading rusher DeShawn Wynn and leading receiver Dallas Baker.

The Gators' roster last season included 21 seniors, 27 freshmen and little depth in between. So Meyer realizes the challenges his program faces this coming season.

"I think it's a couple of more recruiting classes before we can talk about reloading," he said. "We were a very top-heavy and bottom-heavy team. I think there's a significant drop-off between the senior class that just left and the class that's coming up."

That's not to say the Gators will fall out of the driver's seat in the SEC East. Tim Tebow, the No. 4 high school quarterback in the country in 2005, played a larger role than expected as a freshman and goes into spring practice as Leak's undisputed successor. Harvin was one of the country's top freshmen and figures to play an even larger role on offense as a sophomore. The offensive line was riddled by injuries last season, but four starters return.

Some help already has arrived on the Florida campus. Quarterback Bryan Waggener, a juco quarterback from Citrus College in Glendora, Calif., was among nine prospects who enrolled in classes at Florida last month. Cameron Newton, from Atlanta's Westlake High, also enrolled early. Newton is ranked the No. 9 prep quarterback nationally by Scouts Inc. 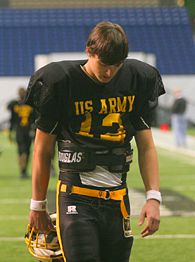 "Without them, we would have had one scholarship quarterback in spring practice," Meyer said.

John Brantley IV, from Trinity Catholic in Ocala, Fla., is expected to sign with the Gators on Wednesday. Brantley, ranked the nation's No. 4 high school quarterback, originally committed to Texas before switching to the Gators. His father, John Brantley III, started at quarterback for Florida in the late 1970s, and his uncle, Scot Brantley, was a star linebacker there. John Brantley IV threw for more than 6,000 yards and a state-record 99 touchdowns at Trinity Catholic.

Four of the prospects who enrolled early played at Lakeland High, the three-time defending Class 5A state champion in Florida. Two more prospects from that school, defensive tackle John Brown and tailback Chris Rainey, are expected to sign Wednesday. Brown and Rainey are ranked No. 3 and No. 6 nationally at their respective positions by Scouts Inc.

Meyer said getting the talented players to Florida is only half the battle. Shaping them into productive college players and molding them into a championship team is even more difficult. Putting together a long string of championships is nearly impossible anymore, he said.

"There are just so many factors that keep it from happening," Meyer said.

Only Steve Spurrier, who led Florida to the 1996 national championship and won seven SEC East titles in nine seasons, has come close to matching the dominance of the Bear Bryant-coached Alabama teams of the 1960s and 1970s. And even Spurrier admits the league wasn't as balanced or difficult when he coached his alma mater.

"The teams are better now than they were in the 90s," said Spurrier, now coach at SEC East rival South Carolina. "It was us and Tennessee in the East. In the West, it was Alabama and then they fell off. I just think all of the teams have gotten better."

So although Meyer continues to haul in blue-chip recruits from far and wide, he knows the rest of the SEC isn't standing still.

When the ink is finally dry on national signing day, Florida might well be on top. But there will be plenty of other familiar names close by -- five other SEC schools have assembled recruiting classes that are ranked in the top nine nationally by Scouts Inc.

"If you look at the top classes, six or seven of them are SEC teams," Meyer said. "This conference is too tough and the schedule is too tough."