Matthews and another Bulldogs assistant arrived at Lower Richland High School and saw the lights of South Carolina's Williams-Brice Stadium in the distance. Matthews couldn't believe the Gamecocks hadn't pursued the player they were about to meet.

The player was Richard Seymour, who would eventually become a four-year letterman for the Bulldogs, a first-round pick in the 2001 NFL draft and a five-time Pro Bowl selection for the New England Patriots.

"We couldn't believe nobody knew anything about him," Matthews recalled. 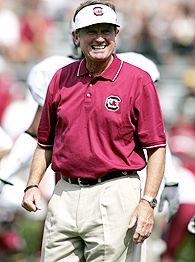 Perhaps it shouldn't have been that much of a surprise. For nearly a century, it seemed South Carolina couldn't find good players, even when they were sitting in the Gamecocks' backyard. After all, South Carolina has played college football for more than 100 years, but didn't win its first bowl game until 1995 and has won one conference championship -- the 1969 ACC title -- in its lengthy history.

So even when former Florida coach Steve Spurrier became the Gamecocks' coach in November 2004, there were still doubts about how successful he would be at a school that has traditionally finished fourth or worse in the SEC East.

Critics questioned whether there would be enough quality players in the sparsely populated state for both South Carolina and rival Clemson, and whether even a coach as acclaimed as Spurrier could lure out-of-state prospects to a program that didn't have much of a winning tradition.

"I'm here because a lot of the football experts said you couldn't win here," Spurrier said Tuesday, while sitting in his office that overlooks Williams-Brice Stadium. "They said it was too tough with Florida, Tennessee and Georgia in the same division of the SEC. I knew it wasn't going to be easy, but that's the challenge in life, to try to do things that people say can't be done. That really does motivate me."

Spurrier will take yet another step Wednesday in proving his critics wrong by signing what is expected to be a recruiting class ranked in the top 10 nationally, and undoubtedly the best in South Carolina history. Seven prospects enrolled early last month, and the Gamecocks are expecting to sign another 24 players on Wednesday's national signing day for college football.

"I think when the Alabama and Miami jobs opened up, and my name was rumored with them, it sent a wonderful message that I love it here. Right after that happened, I got a one-year extension and raise at South Carolina. I think this is as good of a place as anywhere in the country to be a college football coach and I'm going to be here."
-- Steve Spurrier

However, the Gamecocks are projected to sign 12 players from Florida, where Spurrier spent most of his coaching career at the University of Florida, his alma mater. South Carolina also expects to sign eight players from North Carolina.

"It just happened that way," Spurrier said, of the emphasis on out-of-state prospects. "We've obviously got some ties down there [in Florida]. We've only got three or four guys from North Carolina on our team and we might sign seven or eight from that state. That's an interesting turn of events."

Spurrier said his staff will continue to recruit South Carolina heavily and keeping the state's top players home remains his top priority in the future.

"South Carolina is just not a heavily populated state," Spurrier said. "But high school football in this state is as good as anywhere else to me. There just aren't as many high schools and players. There are some good players. A lot of them have left the state and some have stayed."

Spurrier has given those players more of a reason to stay. He has led South Carolina to bowl games and winning records in each of his first two seasons at the school. Last season, the Gamecocks finished 7-5 and beat Houston 44-36 in the Liberty Bowl. Getting the Gamecocks' games on TV has been very important in improving recruiting, Spurrier said.

"What's helped us is being on television a bunch," Spurrier said. "I thank ESPN for putting us on those Thursday night games. We opened the college football season the last two years and were on a bunch of Thursday night games, too. It gave us some exposure. We didn't win all of them, but we were competitive in all of them and had a chance to win.

"It maybe showed the country and the high school players that you can win at South Carolina. It showed South Carolina has a big stadium with loud fans who love their team and that this would be a wonderful place to come play your college football career and a wonderful school to graduate from."

Despite his adamant denials that he was not a candidate for coaching vacancies at Alabama and Miami, Spurrier said having his name linked to those schools might have shown recruits how committed he is to South Carolina.

"I think when the Alabama and Miami jobs opened up, and my name was rumored with them, it sent a wonderful message that I love it here," Spurrier said. "Right after that happened, I got a one-year extension and raise at South Carolina. I think this is as good of a place as anywhere in the country to be a college football coach and I'm going to be here."

"I've always said I'm not going to mention if you did or didn't call at any of those schools," Spurrier said. "But obviously the rumors and speculation that I was going to Alabama was all we needed to make it beneficial for us. There was a perception that I had a chance to go to both those places, whether or not I did or didn't. I was never leaving here."

And with that same swagger and confidence that made him one of the South's most beloved and despised figures while he was leading Florida to the 1996 national championship and seven SEC East titles in nine seasons, Spurrier seems certain the Gamecocks will be on top sometime soon.

"When I got here, they asked me, 'Hey, you going to catch Georgia, Florida and Tennessee?'" Spurrier said. "I told them there is only one way and that's recruiting good players. We can make them top players in the weight room and hopefully with what our coaching staff does. They've got to have the right attitude and all of that, but if our recruiting rankings are the same as Georgia, Florida and Tennessee for a few years, I think we should be favored."