It wasn't that long ago when recruiting coverage was almost non-existent on a national level. When I think about my own recruiting experience, it is difficult to remember ever doing an interview about the recruiting process. Of course, I wasn't nearly as hyped coming out of high school, but junior college was an entirely different story.

My high school football career began in the fall of 1988 and ended in 1991 as a graduate of Torrey Pines High School in San Diego in the spring of 1992. I went to school with current NBA center Scot Pollard and played football with Denver Broncos safety John Lynch.

As with most high school football players, I wasn't highly recruited. I was the very definition of a "late bloomer." I played for a wonderful head coach in Ed Burke, who is still at Torrey Pines and has been enormously successful. Unfortunately for me, though, we operated in the Delaware Wing-T, a run-oriented attack designed to maximize production despite a lack of offensive team speed. Needless to say, there were not a lot of passing opportunities, maybe 8-12 per game.

However, I also happened to be one of the best athletes -- if not the best athlete on the team at that time -- which was both a blessing and a curse. I started every game at quarterback over my four-year career, but during my senior campaign I contributed at a number of positions including wide receiver, running back and kick and punt returner.

Ultimately this scenario, coupled with the fact I was not an experienced passer, led to just a handful of teams recruiting me including Fresno State, Washington State and UTEP, to name a few. The problem was the schools didn't know what position to recruit me at -– quarterback, athlete or wide receiver.

It just so happened at the time my father, Al Luginbill, was the head coach at San Diego State, and he wasn't quite sure what to do with me, either.

Was I frustrated? Yes, but there were other options. I felt in my heart of hearts that in the right system, I could become a very good passer, I just needed an opportunity to prove myself. I had already qualified academically, and it just so happened one of the most prominent junior college programs in the country was right up the road at Palomar College.

Palomar had just won the national championship in 1991, and the quarterback job was wide open entering the 1992 season. I saw this as a perfect opportunity. Palomar ran a wide-open, spread attack with the no-huddle that really centered around the quarterback's productivity.

In a nutshell and to make a long story short, during my two-year career at Palomar, our team went 21-1, 11-0 in 1993 and again won the national championship. Along the way, I became the most prolific passer in the history of junior college football at that time, throwing for over 7,600 yards and 67 touchdowns.

As a result, I also became the most highly recruited junior college player in the country in 1993. Not bad for a kid who nobody knew about two years earlier coming out of high school, but it just goes to show that being in the right place at the right time is sometimes all you need. Not all players are ready right out of high school and this is why the terms "upside" and "potential" get used so often in our evaluations.

The hoopla was ridiculous surrounding my recruitment on a local level primarily because so many wanted to know if I was going to go to San Diego State and play for my dad. Unfortunately, he was let go following the 1993 season, so that was no longer an option and honestly, I do not believe I would have gone that route anyway. There would have been too much pressure on him.

On a national level, there were a few services that would come out with a top 100 or something, but no internet sites, no gossip and rumor mills and certainly no television coverage. Essentially, the coaches, not the fans and public, were really the only ones who knew who the best players were.

I was recruited and offered a scholarship by just about every program in the country that recruited the junior college level heavily. The Pac-10, Big Ten, WAC, Big East, Big 12, you name it. I had grown, matured, developed physically and mentally and was an entirely different player at 20 years old than at 18.

As with most prospects, my focus was on how quickly I could get on the field. Big mistake. Despite my experience at the junior college level, I wasn't ready and should have redshirted.

I had taken my visits, narrowed my choices down to Fresno State (primarily because current Cal coach Jeff Tedford was the offensive coordinator), Northwestern, Washington State, Kansas State and Georgia Tech. The official visits were fun and provided me with the information I needed to make my decision.

Now came the hard part -- telling everyone no. This is without a doubt the most difficult part of the recruiting process. All the coaches have spent so much time trying to convince you their program was the right place. As with all prospects, I formed relationships with many coaches and still remember every one of them. Some coaches handled it well, some did not and that was to be expected. 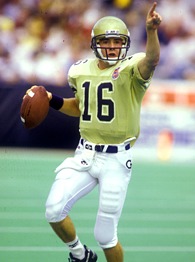 Despite winning the starting job at Georgia Tech in spring football prior to my junior year, I found the 1994 season didn't go quite as planned. We suffered through a 1-10 season, Coach Lewis got fired, George O'Leary got hired and I ended up transferring to Division I-AA power Eastern Kentucky to play for legendary coach Roy Kidd.

I guess all is well that ends well. There were three schools in four years, I was a four-year starter throughout my career and ended with an overall winning record. A national championship, huge crowds and the Division I-AA playoffs were all highlights. More importantly, I received a degree from Eastern Kentucky and a Masters degree from Marshall University.

I got to compete against some of the best, including Florida State (I threw a pick to Derrick Brooks) and Arizona (Tedy Bruschi sacked me). I played in great stadiums, including Death Valley at Clemson and even earned ABC/ESPN "Chevrolet Player of the Game" honors a couple of times.

The point of all of this is simple. Not all high school players are going to take the same route to get to where they want to be. The reality is not all players will even become full-time starters at the college level, and more importantly, even fewer players will make it to the NFL.

The recruiting process is a roller-coaster, and when you are 17 or even 20 years old, the decision you make will have a huge impact on the next four or five years of your life not just in football, but in life.