There are fast wide receivers, and there are physically intimidating wide receivers. Then there is 6-foot-4, 215-pound speedster Julio Jones, who is both.

"He is polished, strong, gifted and the most physically dominating prospect in this class."

Naturally, Jones has his pick of where he'd like to play college football. He hasn't narrowed down his list of schools yet and probably won't decide until national signing day nears in February. 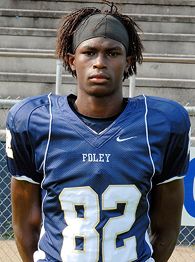 Bragging rights for the best football state this year go to Florida, with 32 ESPN 150 prospects; Texas has 24, while California and Georgia have 15 each.

"Florida is loaded, especially with defensive speed and at linebacker," Luginbill said. "As always, it's a good year to be recruiting any of those states."

Miami (Fla.) ties with Texas for the most verbal commitments among ESPN 150 prospects with eight, followed by Notre Dame with seven and Oklahoma, Georgia and Ohio State with six each. Verbal commitments are non-binding and not official until letters of intent are signed in February.

Myron Rolle (Florida State) topped the 2006 ESPN 150. Joe McKnight (USC) finished as the No. 1 prospect in the 2007 ESPN 150 after both Jimmy Clausen (Notre Dame) and Marc Tyler (USC) held the honor earlier that year.

The ESPN 150, which ranks the top high school football prospects, is compiled by Scouts Inc.

Henry Gola is the recruiting editor for ESPN.com