BUFFALO, N.Y. -- As freshman defenseman Marc Del Gaizo's blast from the left point sailed into the upper-right corner of the net, he helped the UMass Minutemen take the next and biggest step in their program's history. For men's college hockey, it was another in a long line of reminders that the landscape is continually evolving.

UMass has never played for a national championship in men's hockey. Thanks to Del Gaizo's overtime goal, on Saturday it will. Should the Minutemen win their contest against Minnesota Duluth (8 p.m. ET on ESPN2), UMass will become the fourth school to win its first men's hockey championship in the last seven years. UMD, meanwhile, is looking to become the first team since Denver in 2004 and 2005 to win back-to-back titles. The Bulldogs also won it all in 2011.

The 2018-19 season was one of the most drastic examples of the growing parity of college hockey, punctuated by a new team making the final (UMass) and a team that has established a new level of prestige in only the last 10 years (UMD).

This season saw the four-year-old men's team at Arizona State reach the NCAA tournament for the first time, while American International College knocked off top-seeded St. Cloud State in the opening round of the tourney. As this has been happening, many of the long-established programs -- the blue bloods of college hockey -- struggled this season. 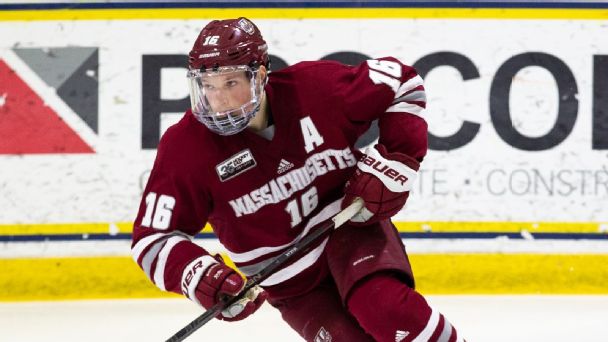 "The hardest thing in college hockey is to sustain the success," says Providence coach Nate Leaman, who guided the Friars to their first national title in 2015 and a Frozen Four berth this season. "In building it up at Providence and building and building it, once you win, you're always going up and believing the hardest part is building it. Sustaining it is every bit as difficult. There are a lot of challenges."

Among the teams that did not even make it to the NCAA tournament were Michigan (nine national championships), North Dakota (eight), Wisconsin (six), Minnesota (five), Boston College (five) and Boston University (five). Denver, which owns eight national titles and made the men's Frozen Four this year despite having the fourth-youngest team in the country, was the only true power to make the field. It was a relatively stunning turn of events given the consistency these programs have enjoyed.

Another thing almost all of those teams have in common? They were among the youngest teams in men's college hockey. BU's average age of 20.6 made the Terriers the youngest team in the NCAA.

Where have all the blue bloods gone?

College hockey has always skewed a little older because the sport is uniquely positioned compared with other NCAA sports that send players to major professional leagues. NHL teams can draft a player who is going to college and retain his draft rights for as many years as the player remains a student. Once a player is past four years since his draft and leaves school, he also has an option to become an unrestricted free agent.

At the same time, the NHL has continually skewed younger. The desire for players to contribute while on cheap entry-level deals has only grown larger among NHL general managers. Meanwhile, as more players use the collective bargaining agreement to their advantage and become unrestricted free agents, the pressure NHL teams feel to sign players earlier has only grown.

This has created a landscape not terribly dissimilar to college basketball. In this scenario UMass is essentially 2018-19 Texas Tech basketball, reaching its first national championship game as many of the programs that have dominated the landscape for decades falter amid their reliance on one-and-done players. There was a lot of ink spilled observing this fact, with some decrying the one-and-done situation in basketball, and others simply wondering if teams should focus more on going after players they know they can keep, sacrificing instant-impact talent for long-term sustainability.

According to College Hockey Inc., which helps market college hockey independent of the NCAA, 31 players who played during the 2017-18 NHL season played just one year of college hockey. An additional 58 played two years before signing. The one-and-done or two-and-done issue is not totally widespread, but it disproportionately impacts historic programs like the aforementioned blue bloods because many of those programs have such long track records of success at developing -- and attracting -- NHL talent. They get many of the best players, players who are first-round draft picks, or star players at their respective junior clubs, who are more prepared to come in and be instant contributors at the NCAA level.

The frequent turnover at top programs has allowed other schools that tend to woo less heralded players to come in and compete thanks to roster stability and experience.

Minnesota Duluth may be the model program for sustainable success. It has taken about a decade to get there, though.

"We changed some recruiting in 2008-09, looking to get a certain type of player. Guys you can build around that might be in the program for four years," says Scott Sandelin, who is seeking his third national championship as head coach of Minnesota Duluth. "We've always kind of recruited players that fit here and were more of a blue-collar mentality."

Recruiting to type has paid off for the Bulldogs. They won their first national title in 2011 and now that they've had sustained success, Sandelin noted that they're able to get higher-end players on a more consistent basis.

"We do our thing and we get the kids that really want to be a part of our program and have the same mentality we do and we've been fortunate to build off of that," he says. "A lot of the credit goes to the players we recruit."

UMass is a bit of a different animal, but this season's team shows the benefit of not only landing elite players, but convincing them to stick around for more than one season.

UMass' Marc Del Gaizo sends a slapshot into the back of the net in overtime, sending the Minutemen into the NCAA hockey championship.

Cale Makar was drafted fourth overall in 2017 by the Colorado Avalanche. He committed to the Minutemen under a different coaching staff, but stuck to his word to go to school there. After a strong freshman season, he had a chance to leave for the pros, but opted to stay because he felt he needed more development time.

"From the beginning, my goal was to go play college for two years," Makar said. "I had some stuff I wanted to work on coming back and I really felt our team could make a run at it this year."

Now a sophomore, the 20-year-old won the Hobey Baker Memorial Award on Friday as college hockey's most outstanding player and helped lift UMass to new heights. He is expected to sign with Colorado soon after his season ends and could even end up being in the Avalanche's lineup during their first-round playoff series against the Calgary Flames.

His presence helped UMass -- which won just five games in 2016-17 before Makar arrived -- reach heights the program had never seen before. The Minutemen are now on the brink of a national title. There are plenty of examples of how getting elite players goes a long way, but there has to be balance as well, which is evident with this season's UMass team that is young, but not too young.

"We get kids that come to UMass that haven't been the golden child," third-year head coach Greg Carvel says of his Minutemen. "They've had a tougher road and they have a chip on their shoulder. We like kids like that. They compete."

Del Gaizo is one of those kinds of players. He went undrafted last season despite being the United States Hockey League's defenseman of the year. He arrived at UMass and was an instant contributor playing alongside Makar, going from unheralded recruit to Frozen Four hero.

Time will tell where UMass goes next, as a few players from this year's team could depart early. It's a problem the school hasn't had to deal with too often, but the Minutemen could experience some of the same struggles as the more established programs did this season.

The biggest challenge these days appears to be retaining players. The more success your team has, the more sought after your players become. College hockey also has the unique issue of not only having to worry about early NHL departures, but guarding against losing recruits to Canada's major junior leagues, where players lose their NCAA eligibility. But the fact that more college players are signing NHL deals only showcases the growth and legitimacy of college hockey as a development route to reach the NHL.

A record 325 former NCAA players appeared in NHL games during the 2018-19 regular season, according to College Hockey Inc. That constituted a third of the entire NHL. It's not just the drafted players either, as 56 percent of the undrafted players in the NHL came from the college ranks, having signed as free agents.

As those numbers continue to grow -- which they appear to be on trend to do -- there could be more situations where players jump early. It also will allow college hockey to continue to attract elite talent because players see the path from the NCAA to the NHL more clearly, as players such as Jack Eichel, Brock Boeser, Dylan Larkin, Zach Werenski and so many more continue to take the league by storm.

"We get kids that come to UMass that haven't been the golden child. They've had a tougher road and they have a chip on their shoulder. We like kids like that. They compete."

Meanwhile, parity will reign supreme in college hockey for the foreseeable future. That may not necessarily be the worst thing. More schools feel they can compete now and schools are more eager to invest in their programs to keep up.

"You're seeing a lot more teams continue to get better and develop," Sandelin says. "Even the teams that aren't here -- the ones everyone talks about -- they'll be back," he adds, referring to the historic powers that faltered this season.

"You're going to have cycles. I think there's so much parity, so many good coaches, it's really put college hockey in a really good spot."