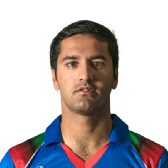 Najibullah Zadran and Mohammad Nabi belted seven sixes in seven balls as Afghanistan demolished Zimbabwe by 28 runs in Mirpur. The win ensured 11 consecutive T20Is without a defeat for Afghanistan - incredibly it's the second time they've hit that number and only Australia have gone better (12).

Zimbabwe have now played eight matches against Afghanistan and they have lost all of them. The bowling looked rather listless under fire the batting couldn't get anywhere close to the target of 198 leaving the team in danger of early elimination.

Seven sixes in a row

Najibullah and Nabi added 107 runs in just 6.4 overs, the second-fastest 100-plus partnership in T20Is, as well as the second-highest fifth-wicket stand in the format. Afghanistan also combined to hit 15 sixes, the most at the Shere Bangla National Stadium.

Najibullah switched into a higher gear the moment Asghar Afghan got out in the 14th over. He went after debutant Ainsley Ndlovu and Kyle Jarvis before Nabi struck Chatara for four consecutive sixes - twice over deep midwicket, one straight down the ground and the last one biffed over cover.

That ended a 26-run over but the carnage continued as Najibullah struck Neville Madziva for three sixes from the other end, making it seven in a row. He went twice over midwicket and once behind square on the off side before swatting Jarvis over extra cover in the 19th over for the last of his six sixes. He finished 69 not out off 30 balls while Nabi, who fell on the last ball of the innings, made an 18-ball 38.

Afghanistan had already got off to a sound start thanks to debutant Rahmanullah Gurbaz who struck five fours and two sixes in his 24-ball 43. Gurbaz added 57 for the opening stand with Hazratullah Zazai but the pair fell within nine balls of each other. Zimbabwe must have thought they were back in the game when they picked up the wickets of Najeeb Tarakai and Afghan, but then came that flurry of sixes that even now has to be hard to for the team to take.

After Hamilton Masakadza's run-out in the third over of the chase, left-arm quick Fareed Ahmad removed Brendan Taylor and Sean Williams in the space of three balls. It took out the steam from Zimbabwe's chase before Craig Ervine's wicket in the seventh over reduced them to 44 for 4.

All of this happened before Rashid Khan, on his T20I captaincy debut, brought himself into the attack. He had Tinotenda Mutombodzi caught at midwicket for 20, before removing Ryan Burl, who made a fifty in the previous game against Bangladesh, for a run-a-ball 25.

Madziva and Regis Chakabva tried to push Zimbabwe towards the target with their 45-run seventh-wicket stand after they were reduced to 96 for 6 in the 14th over. Madziva struck two sixes in his 11-ball 15, while Chakabva top-scored with an unbeaten 42 off 22 balls with three fours and two sixes. But it came far too late and only reduced the margin of defeat.