When Nicollette Sheridan dropped towel in front of Terrell Owens and leapt into the arms of controversy during a tawdry tease for Monday Night Football, the steamy locker room encounter between a "Desperate Housewives" temptress and the ego-centric wide receiver became a flashpoint for what steps out of the bounds of decency.

"A stinking thing for ABC to do," political pundit Pat Buchanan exclaimed.

In the wake of Janet Jackson's "Nipplegate" performance during halftime of last year's Super Bowl telecast, and at a time when "moral values" may have swayed the outcome of the presidential election the previous week, some 50,000 complaints were said to have flooded the Federal Communications Commission in the days following that Monday night game between Owens' Philadelphia Eagles and the Dallas Cowboys.

FCC chairman Michael Powell said he was outraged by the salacious scene and promised to make a federal case of it. "Wonder if Walt Disney would be proud," he said, perhaps in part wonderment of morality lost in America and part slam on the Disney Company, which owns ABC (and ESPN).

In the media's dichotomous view, America was divided into two camps: Red State moralists whose horror at the sketch revealed their not-so-latent racism, and Blue State dissipates who delighted in the provocative imagery. Both sides felt, it seemed, that America was not ready to see a white woman portrayed in assignation with a black man.

"From what I can tell from everybody's reaction, the country definitely wasn't," Jeffri Chadiha wrote in Sports Illustrated.

But the country wasn't quite as upset as some indicated. Despite an FCC official's estimate of the piles of complaints, the agency could produce only 1,997 in response to a recent Freedom of Information Act request. Those comments contained responses that were far from uniform outrage. And while reactions unquestionably demonstrate that the use of interracial imagery can still offend many people, they also reveal a public that is widely accepting of cross-racial intimacy itself, but one that engaged in a nuanced argument over how directors should employ such images.

To borrow football parlance: It wasn't the play, but the execution that made it fail.

In the end, the debate in the media proved louder than the outcry itself. About two-thirds of all comments sent to federal regulators were explicitly political -- with about half supporting Powell's comments and urging the FCC to tighten restrictions on network broadcasts ("Fine ABC!" read several dozen), and the other half opposing Powell's stance ("Don't fine ABC!" read several dozen more). Most of the complaints arrived not Monday night or Tuesday, when actual viewers of the game wrote the most knee-jerk responses, but Wednesday and Thursday, after Powell's comments headlined network news. Many responses appeared to be so-called "Astroturf," crafted around the templates of various interest groups. Some just sent in the actual templates.

The final third, however, were more detailed in their arguments. The majority of them, about 20 percent, called the ad "trashy" or "smutty" or said it had aired in an inappropriate time slot for viewers with children. While "Desperate Housewives," the ABC ratings hit, airs in prime time from coast to coast, Monday Night Football kicks off at 9 p.m. ET, 6 p.m. on the West Coast.

Another 13 percent called it "degenerate," "disgusting" or corrosive to "morality." "This is another indicator that moral views are being changed and that Pro Football's world view is filthy and degenerate," one person wrote. Sixteen people objected to the tease's anti-Christian subtext because, aside from her towel, Sheridan wore only a crucifix.

Fewer than 100 responses, about 4 percent of the total, directly addressed the issue of race. Prominent among them were 38 who said they found the very idea of intimacy between a black man and a white woman offensive, some in very colorful -- and often inappropriate -- language. Segregationists, however, were outnumbered by those who believed the show's opener reinforced a stereotype of black men as "sex-driven and without restraint," an argument that echoed Indianapolis Colts head coach Tony Dungy's sentiments. "It could have been any player and I would have been outraged, but being an African-American, it particularly hurt me," Dungy said during his regularly scheduled mid-week media address.

Another small group argued the segment implied that, for black males, success means white women. "While I understand it is now the fashion for black men to choose white women as their partners," wrote one respondent, a black female, "this is such an affront to black women everywhere." "If they're the prize," wrote another, "what are we?"

"So this is not a black-white, left-right debate -- it brings together all kinds of people who might object," said Jay Coakely, a University of Colorado-Colorado Springs sociologist who studies the role of sports in society. "It's simply the arrangement of images. If it had shown an interracial couple getting married, nobody would have said a thing."

The particular set of images contained in the segment -- a powerful black man, unable to control his lust; the white seductress, inflamed by his physical prowess -- access still-festering wounds on the American conscience. Rumors of sexual assault were once used to justify lynchings. "Southern gentle lady,/do not swoon./They've just hung a black man …" wrote Langston Hughes in the poem "Lynching Song." Laws banned "mongrelization" or miscegenation in 41 states. In 1912, when heavyweight boxing champion Jack Johnson was the century's first black sports star, federal prosecutors hounded him for dating white women.

But it was D.W. Griffith who repeated many of the myths behind lynch mobs in his 1915 film, "The Birth of a Nation," said Susan Courtney, a professor of comparative literature at the University of South Carolina and author of the book "Hollywood Fantasies of Miscegenation: Spectacular Narratives of Gender and Race." The first Hollywood blockbuster, "Birth of a Nation" was technically innovative in ways that still influence contemporary films. It's also one of the few movies ever to feature Klansmen as heroes.

" 'Birth of a Nation' was the ur-text for American films, and it's completely structured around the fantasy of a black man raping a white woman," Courtney said. "It's a textbook explanation of lynching rhetoric and how it works." 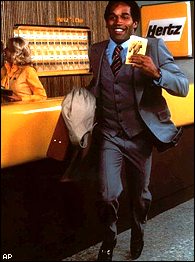 With that as a legacy, moviemakers and advertisers avoided any mention of powerful black men, let alone interracial intimacy, for decades. As one result, black athletes were rarely chosen over their white counterparts to endorse products off the field. It wasn't until 1975 that O.J. Simpson and Hertz changed that. Seeking to get a step ahead of the competition, Hertz hired the high-profile Buffalo Bills running back for its national television campaign.

"O.J. was able, because of football and his great smile, to cross many of the racial barriers of the time," said Jerry Burgdoerfer, the Hertz exec who hired Simpson.

Even so, the director of those early commercials still felt it necessary to strategically juxtapose Simpson's trans-airport dash with shots of smiling white senior citizens cheering "Go O.J.!" -- lest mainstream America mistake Simpson from running from rather than toward something.

"I don't think we ever used a black person reacting to him," Fred Levinson recalled in a 2002 HBO documentary on Simpson. "Always the nice middle-class look."

Magic Johnson and Michael Jordan continued to push the envelope throughout the 1980s and '90s. Today, black and multi-racial athletes like Donovan McNabb, Tiger Woods or Derek Jeter routinely command millions of dollars to headline national advertising campaigns, which in turn helps to ease social restrictions, including those against dating across racial or ethnic lines. Multi-racial Woods recently wed Swedish model Elin Nordegren to nary a public comment on the race of either.

While marriages between blacks and whites remain rare, for example, accounting for less than 1 percent of all U.S. marriages, their frequency is increasing. In 1961, when the prosecution of Richard and Mildred Loving for violating Virginia's Act to Preserve Racial Integrity eventually led to the U.S. Supreme Court decision striking down anti-miscegenation laws, there were 51,000 mixed black-white marriages in the United States. Today, there are more than 360,000.

In 1997, a Gallup/USA Today poll of teenagers aged 13-19 -- the generation that includes most of today's professional athletes -- found more than two-thirds said they had or would date someone of another race. A 2003 Gallup/AARP poll found that 70 percent of whites said they approved of marriage between whites and blacks, up from 4 percent in 1958. And 80 percent of blacks, along with 77 percent of Hispanics also approved.

In 2003, Eagles receiver Freddie Mitchell and Miami Dolphins defensive end Jason Taylor received form letters threatening them with death and castration because they had white wives. Major League Baseball informed the FBI that one of its players had received death threats for the same reason. And Tiger Woods is believed to have received a similar letter. But there's no arguement that things haven't changed since Jack Johnson's day. The FBI, now, is looking for the letter-writer, not the athletes.

That kind of attack now represents such an anomaly that the risk-averse world of corporate marketing has also begun acknowledging today's multi-racial society.

Randall Kennedy, a Harvard law professor and author of the book "Interracial Intimacies: Sex, Marriage, Identity and Adoption," wrote in The Atlantic recently that while advertisers still prefer couples of the same race, interracial couples have become "quite fashionable in some contexts. ... Now at least occasionally one sees interracial couples deployed as enticements to shop at Diesel or Club Monaco, or to buy furniture from Ikea, jeans from Guess, sweaters from Tommy Hilfiger, cologne from Calvin Klein, or water from Perrier."

A successful commercial includes imagery carefully selected to compliment whatever it's selling, said Dana Wade, president of Spike DDB, the advertising agency founded by moviemaker Spike Lee. Certain brands might use interracial couples to convey a hip image. "There, the whole personae of the brand is kind of risky, or on the edge," she said.

Still, there's Visa's series of commercials with Derek Jeter, a campaign that AdWeek called one of 2003's best: As a tuxedoed Jeter eases into a chair across from George Steinbrenner's desk, the boss lectures the Yankees star on the perils of New York nightlife, over a montage of Jeter living it up like Gene Kelly in "On The Town." Just as Jeter assures that he isn't lighting the candle at both ends, the punch line arrives at the door -- a woman with model good looks, wearing a party dress.

But the actress cast opposite Jeter in the commercial is black. Asked why, a spokesman for BBDO, the agency that produced the commercial, said the company "didn't want to touch that one."

Most Americans might not have cared one way or another about the skin tones of Derek Jeter's date, said Richard Lapchick, author of sports' Racial and Gender Report Card and a civil rights activist who organized the international sports boycott against apartheid-era South Africa, but the directors still chose a safe image over a more inclusive reality.

It's much safer, he said, to show black athletes as sexless or only interested in black women.

"For those people who have stereotypes and racism in their lives," Lapchick said, "that's going to be the final barrier to cross."

Aaron Kuriloff is a freelance journalist and a frequent contributor to ESPN.com. He can be reached at aaron.kuriloff@gmail.com.