On the morning of Dec. 9, as is his practice whenever a college football head coaching job opens up, Floyd Keith rushed off an e-mail to University of Colorado chancellor Phil DiStefano and athletic director Mike Bohn, putting them on notice that the Black Coaches Association would be eyeballing their hiring process.

Keith, executive director of the BCA, spelled out that the school's performance would be graded on an A-to-F letter scale in the "Hiring Report Card" to be released next fall. He also attached a list of a dozen or so "capable candidates" and the criteria to be used in determining the grade -- such as the level of direct communication with the BCA, the number of people of color on the hiring committee and among the candidates interviewed, and length of time devoted to the search.

"As you are aware, the BCA is committed to monitoring and grading all Division I-A/I-AA football searches through the 2005 hiring cycle via the 'Hiring Report Card,'" Floyd wrote. "We believe [the] University of Colorado will be committed to reflecting diversity and inclusion in this search and will seriously consider ethnic minority candidates for this position. We trust this letter will open a direct line of communication for further dialogue relevant to potential candidates for this position." 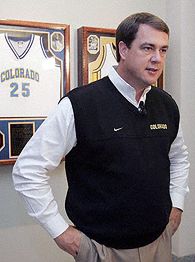 Based on the e-mail exchange later that day, obtained in a public records requested by ESPN.com, Colorado administrators got the message.

DiStefano: "Mike: I'm sure that you received this. If not, please review and advise."

Bohn: "Thank you, I received the same note."

But according to Keith, his words fell on all but deaf ears. On Dec. 8, the day the media gathered to confirm fired Buffs coach Gary Barnett's departure (and the day before Keith sent his e-mail), Bohn announced that he had a top candidate in mind. A "No. 1 all-star," Bohn called him. The hiring process at Colorado was all but a done deal, the decision already made to bring in Boise State coach Dan Hawkins to clean up the mess left by Barnett.

Working with Chuck Neinas -- the Boulder-based sports consultant who played a role in Bohn's own hiring at Colorado and, before that, at San Diego State -- Colorado formally introduced Hawkins as its new coach on Dec. 16. The only other candidate known to have interviewed is former UCLA assistant head coach Jon Embree, an African-American and a former Buffalos player and assistant coach.

According to his records, Keith said the lone call to the BCA office during the Colorado search came on Dec. 9 from Tom McGrath, a special assistant to the athletic director. That's a not-so-impressive "D" for a communications grade.

"I had more phone calls from the media in Denver than I did [from] the athletic department," Keith cracked. "Disappointing? It was somewhat, but it is not unusual." 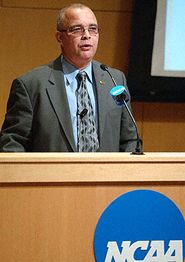 If anything, the Colorado outcome is the norm for college football.

Two of the nine head coaches hired this offseason are African-American -- Ron Prince at Kansas State and Turner Gill at Buffalo -- which exceeds the BCA goal of minorities eventually making up 20 percent of the hires in a given year. Yet at a time when the largest percentage of Division I-A football players are African-American, minority head coaches fill only five of the 119 head coaching jobs: Karl Dorrell at UCLA, Tyrone Willingham at Washington, Sylvester Croom at Mississippi State, Prince at Kansas State and Gill at Buffalo. That's just 4.2 percent.

That pales in comparison to the number of African-American head coaches on the sidelines in college basketball (23.2 percent in the 2003-04 season, according to the Institute for Diversity and Ethics in Sport). And it isn't even close to the NFL, where six of the 32 head coaches are African-American. Because of the perception of better opportunities in the NFL, and better pay and a lucrative pension plan, an increasing number of top minority candidates are leaving the college ranks for pro jobs.

In many cases, athletic directors with fat budgets are locking in a Steve Spurrier or the latest hot name, like an Urban Meyer or Hawkins, before the old coach is even handed his pink slip. So it's a search for a new coach in name only.

But when there is an open, wide-ranging process, as was the case at Kansas State after longtime coach Bill Snyder stepped down, athletic officials are finding the pool of viable minority candidates to be more expansive than they might have believed. Prince, who grew up 20 miles from the Manhattan, Kan., campus, was on athletic director Tim Weiser's own list of minority candidates, though the Virginia offensive coordinator's stock didn't soar until Weiser did some checking around and conducted a face-to-face interview.

"Frankly, we determined early on that it was important for us to identify and consider minority candidates," Weiser explained. "We certainly had coaching openings here before and did not interview any minority candidates because we didn't have candidates that would fit our criteria. In this case, at least in my humble opinion, there is a better pool of minority candidates in the sport of football than I think there might be in any other sport.

"I just noticed there were more coordinators and people in my mind who looked, on paper, prepared to become head coaches than perhaps existed five years ago. I don't know that I can give you a particular reason why there seem to be more. Previously, they either didn't have somebody that was putting their name out there or perhaps weren't as active in making some of the network connections that you have to do in this profession. Many times it is who you know that puts you in positions for these jobs. I don't know if the group has done a better job through the Black Coaches Association of promoting themselves and making themselves known to ADs and commissioners and people who are going to be in position to make hires. Or if it's simply a growth in the number of qualified people from five years ago."

Even though the hiring of Prince figures to land Kansas State an "A" from the Black Coaches Association, Weiser isn't necessarily bullish on the BCA's grading system. He contends that some of its requirements are impractical. For one, the AD often has final say on the hire, and it's a reach to demand a broad-based search committee, let alone minority representation.

"In our case, a search committee really was impractical," Weiser offered. "Search committees don't get fired, but athletic directors do. And I'm not real interested in putting my future in the hands of a group of people that might not know the details or what our job requires. I wanted Bill Snyder to be involved with me. I wanted our president to be involved. And after that, I really didn't see the value of having this large group of people that could run a beauty contest, if you will.

"That part, I don't embrace. But I understand why they feel the need to have some sort of measurable ways to evaluate whether a school is sincere or serious about the search process. And I suppose phone calls are a fair way to evaluate. I talked to both Floyd Keith and the head of the Minority Opportunities and Interest Committee at the NCAA. I think conversations like that, you should have. And it's too bad we are looking at a mandate or requirement to do that. But I would think somebody that is truly going to have an open search would want to consider the input and ideas from people that might know candidates that you might not otherwise know."

So what was the deal at Colorado?

Bohn, the athletic boss, is mum on the general subject of minority hires, but defends his program's hiring process. As for the initial correspondence from the Black Coaches Association, he said: "Well, I think we were very receptive. We were pleased with their input."

Keith, obviously, isn't kicking up his heels over the way it played out in Boulder.

And that leads us to Embree, the only candidate other than Hawkins that Colorado interviewed. While acknowledging that his lack of head coaching experience proved his undoing, Embree won't speculate on whether his was a courtesy interview.

When he returned a call from ESPN.com earlier this week, he was catching a flight at the airport in Los Angeles for Kansas City, where he officially started Tuesday as a tight ends coach for the Chiefs. His dream of a top college job is history, for now.

"I feel I'm close to the situation at Colorado because as a player there, we had Ron Dickerson [later head coach at Temple] and Jim Caldwell [later Wake Forest] as assistant coaches on our staff," Embree said. "So I've seen it as a player and now, 20 years later, as an assistant, and there has been some change. Now, is it as quickly as you'd like and what you would like to see? No. But at the same time, I do see some of those changes.

"To me, what it ultimately comes down to is not just color, but what I call selective criteria. If you go into a search you [can] set up the criteria in such a way you can eliminate all black candidates -- if you just say, 'I want someone with head coaching experience.' Well, there are only four or five [African-American] guys out there with that. That hurts some in the process, too, because sometimes they go in and boosters or whoever say, 'Hey, we want someone who has been a head coach.' And they maybe don't realize that they're eliminating all minority candidates [except] the ones that are currently head coaches."

Embree's new role with the Chiefs has him following in the footsteps of his old boss, Karl Dorrell, who apprenticed in the NFL before landing the UCLA head job. Fellow UCLA assistant and former Colorado running back Eric Bieniemy is likewise jumping from a college job to the NFL, with the Minnesota Vikings. And another highly regarded college assistant, Curtis Johnson of the University of Miami, left this week for the New Orleans Saints.

Even Prince, an Appalachian State product, had NFL connections before he landed the Kansas State job. His mentor at Virginia, Al Groh, is a former NFL coach. And Prince spent four summers in the NFL's minority internship program, working alongside the staffs of the Jacksonville Jaguars, Washington Redskins, Atlanta Falcons and New York Giants.

"It's a combination of money and the pension," Embree said of the flight to the NFL. "Plus, there seems to be more opportunities available in the NFL to minority coaches. There is not as much of an order. In other words, you have to do this, have to do this and then you have to do that, and then you can become a head coach in college. The guy I am getting ready to go to work for hasn't been a coordinator -- Herm Edwards -- and he just got hired in a second head coaching position."

Plus, while it seems to open new career avenues, an NFL gig also enhances your shot at a top college job. Dorrell, Willingham and Croom all worked as NFL assistants before they got their first college head coaching jobs.

"The college presidents and ADs better wake up," Keith cautioned. "Talent from the collegiate ranks is going to the professional ranks because they have better opportunities in the pros.

"It's encouraging to see the NFL successes, but it doesn't take the collegiate people off the hook. We shouldn't even be having this discussion. We should have a higher percentage of [African-American] coaches on the collegiate ranks as head coaches than we do in the NFL. Or at least the same. What we have now doesn't make sense."

Whether it'll change measurably anytime soon remains to be seen.