He was sitting on the edge of his bed, in a small room in Harlem, listening to the radio. The room was dark; there was no reason for it not to be, because the old man was blind. He stood up when the visitor entered, and fumbled for a string attached to a bulb in the ceiling.

"You come to see me?" he asked, somewhat incredulously.

His visitor replied that yes, he had come to see him. He was, he said, a newspaper reporter; he wanted to write a story about him.

"What you want to write about old Sam for?" replied the man. "He ain't no good anymore. You ever see me fight?"

It had been nearly 18 years since Sam Langford had last fought, in August 1926, and by then, he was well past his prime, probably aged 41, and already almost completely blind. Over a 24-year span, he had fought some of the very best of his era, from lightweight to heavyweight, winning far more often than he lost. Although his exact record is a matter of some confusion, he fought at least 293 times, won at least 167 against 38 defeats and a combined 85 draws and no decisions, and scored at least 117 knockouts, the last of which ranks him in the top 10 of all time. By the time Al Laney of the New York Herald Tribune tracked him down that January day in 1944, he already had been largely forgotten; but at his peak, Sam Langford was one of the very best fighters in the world, and to this day is considered among the greatest of all time.

"I think Langford is probably one of the top five greatest fighters we've ever had on the planet," said Kevin Smith, author of "The Sundowners: The History of the Black Prizefighter 1870-1930."

Boxing historian Bert Sugar is marginally less effusive; in his book, "Boxing's 100 Greatest Fighters," Sugar ranks Langford No. 16. But, he wrote, "he is the highest non-champion."

And therein lies perhaps the principal reason Langford's name does not resonate in the same way as contemporaries such as Stanley Ketchel, Jack Johnson or Jack Dempsey. For all his accomplishments, Langford was never granted a world title shot at any of the weights in which he fought, because he was both a very good fighter, and a black one.

"He was the most feared fighter of the first two decades of the 20th century," said boxing historian and author Mike Silver. "He was just about a complete fighter. He was very short [around 5-foot-7], but he had unusually long arms. Also, he was way ahead of his time as a boxer. He could fight on the inside, he could fight on the outside. If he had to fight on the inside, he knew how to get inside. He was a long-distance, middle-distance and short-distance fighter. He could do it all. He was also a devastating puncher, which was amazing because he carried his punch in every weight division he moved to."

Langford is believed to have been born in Weymouth, Nova Scotia, on March 4, 1885. His first recorded professional fight was a fifth-round knockout of Jack McVicker on April 11, 1902. He spent the bulk of his boxing career living and fighting in and around Boston, earning him such nicknames as "The Boston Terror," or the more famous if entirely less savory "Boston Tar Baby."

Almost from the beginning of his career, he fought tough, skilled opponents, including world champions with far more ring experience.

"The guys he was fighting even in his first year, they were some pretty hard-core guys," Smith said. "When I think about it, no one was looking out for his interests, or they wouldn't have thrown him in with these guys."

In 1903, still a lightweight, and in just his 26th recorded professional contest, he fought and beat world champion Joe Gans over 15 rounds in a nontitle bout.

"Now, Gans had fought the night before, then caught the train up from Philadelphia and basically was drinking and playing poker all night," Smith said. "But still, you put a first-year kid against a Bernard Hopkins or a James Toney today, and they're getting ruined, I don't care how long Toney's been out the night before."

From there, Langford progressively moved up in weight, continuing to take on the toughest possible opponents.

"He was 135 starting out, and he just got bigger and thicker," Smith said. "He was one of those guys you never wanted to fight because he had a big, thick neck and wherever you hit him, you just couldn't hurt him. 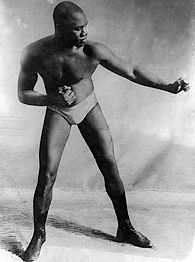 "People always talk about his arms being so long, but reach is a deceptive measurement because it includes the breadth of your shoulders. And if you look at Langford from the back, his shoulders were just tremendously broad. He was a freak of nature, there's no doubt. He was all torso and arms, and a big, thick neck. He was kind of like [Mike] Tyson with longer arms and broader shoulders, if you can believe that, and a little bit shorter."

In 1904, Langford fought to a draw in a nontitle bout with world welterweight champion Joe Walcott. By 1906, Langford was across the ring from future heavyweight champion Jack Johnson. Johnson knocked Langford down in the sixth and won a 15-round decision.

"At that time, Langford was about 155 pounds, and Johnson was about 190, 195," Smith said. "It was a man versus a boy. Langford was still pretty young. He'd only had a couple of fights against other heavyweights. But I think even at that time that people saw that Langford was a special fighter."

Over the years, the myth grew that Langford had given Johnson all kinds of trouble, and that his defeat had been controversial. The story was stoked by Langford's manager in an attempt to drum up demands for a rematch after Johnson had become the first black man to win the heavyweight championship. But Langford had grown bigger (although he was always small for a heavyweight, even by the standards of the time), more skilled and more experienced in the interim, and Johnson demurred. Langford never did get his shot at a world title.

"Of all things, Jack Johnson drew the color line," Silver said. "But that wasn't so much that he thought he couldn't beat [other black boxers], it was really the economics of the sport. He might have made money fighting Langford, maybe, but if Langford had a shot, why take the risk? And the promoters aren't going to go for it, because they just replace one black champion with another black champion."

Denied an opportunity to fight for a world title, Langford was obliged repeatedly to fight the same opponents over and over again -- mostly fellow outstanding black boxers who, like Langford, were denied title shots by the color barrier. He fought Joe Jeannette 13 times, Sam McVey 13 times and Harry Wills 18 times. When he fought white opponents, he was frequently instructed to carry them, which he knew he had to do if he wanted to keep getting fights.

In June 1917, he quit during a fight against Fred Fulton, failing to come out for the seventh round because of injury. The Boston Globe reported that "when Sam quit, his eye was closed tightly." It was likely during this fight that Langford suffered the damage that rendered him blind in his left eye.

And yet, notwithstanding this most debilitating of handicaps, Langford fought on. In 1922, at age 37, he scored a second-round knockout against future middleweight champion Tiger Flowers, despite suffering an injury that all but blinded him in his remaining good eye.

"How he used to fight, he used to feel his opponent, he used to go in close -- and he was such a brilliant fighter, he could fight inside for the entire fight -- and as soon as he was on the inside, he would instinctively know from his years of experience, he could tell where his opponent's arms were and so forth and he could do OK," Silver said.

Langford later recalled that, "I went down to Mexico in 1922 [in fact, 1923] with this here left eye completely gone and the right eye just seeing shadows. It was a cataract. They matched me up with Kid Savage for the title. I was bluffing through that I could see but I gave myself away. They bet awful heavy on the kid when the word got round. I just felt my way around and then, wham, I got home. He forgot to duck and I was the heavyweight champion of Mexico."

Eventually, Langford could no longer disguise his ailment, and after he walked to the wrong corner in a fight in 1926, his license was revoked and he retired.

And then, Silver said, "crazy as it sounds, one of the greatest fighters who ever lived was basically forgotten. He just disappeared. Nobody knew where he lived."

When Laney found him, Langford was penniless, hungry and alone. After Laney's newspaper column appeared, a fund was set up and a hat regularly passed around on Langford's behalf at local fights. As a result, the former fighter lived relatively comfortably for the rest of his days, until he passed away Jan. 12, 1956 -- at the probable age of 70.

"I mention his name, and I see nothing but glazed eyes," said Sugar. "Nothing. Zero on the Richter scale. And not only that, you can't find his record in The Ring Record Book because he wasn't a champion. So, not only who was he, but how can I find out about him?

"The funny thing about Langford is that he's half-blind, and he comes to Doc Kearns [manager of heavyweight champion Jack Dempsey] in the '20s -- and remember, Sam Langford has been fighting since the aughts -- and he wants to fight Dempsey. And Doc Kearns says, 'Sam, we were looking for somebody easier.'

"He was half-blind, he was a goddamned middleweight, and he was that good."

Kieran Mulvaney is a freelance writer based in Washington, D.C. He covers boxing for ESPN.com, Reuters and TigerBoxing.com.