PHILADELPHIA -- Each swim meet, Brielle White finds a place to get situated, puts down her gear and usually sits alone by the side of the pool. She feels the eyes on her each time, the double takes as swimmers walk by. It's what comes with being alone, and often being "the only one." It's what comes with being one of the few elite African-American swimmers in the country.

There are 300,000 competitive swimmers in the United States, according to USA Swimming, the governing body based in Colorado Springs, Colo. Fewer than 2 percent are African-American, and White is one of them. It's a barrier that is culturally and socioeconomically based. It's a barrier that White has broken through, along with swimmers like world-record holder Cullen Jones, and Maritza Correia, the first female African-American Olympic medalist.

White, a seven-time All-American backstroker and two-time ACC Swimmer of the Year when she attended Virginia on a swimming scholarship, now aims at the 2008 Olympic Trials in Omaha, Neb., with the hope of making the 2008 U.S. Olympic swim team that will head to Beijing, China. She has been invited to the Pan-American Games this summer in her top event, the 100-meter backstroke.

But there are obstacles.

She works out with her Philadelphia Department of Recreation (PDR) club team that she's belonged to since she was 6, practicing each night after eight hours of work as a paid intern in the Philadelphia Phillies sales department. PDR practices at the Marcus Foster swimming pool, at Simon Gratz High School, in the Nicetown section of Philadelphia.

Just don't go there when it rains. The roof leaks. A hose has to be placed into the pool, pumping in water at 120 degrees to keep the pool warm. The air temperature is frigid. The boilers often break during winter. There are times when the team can't practice because the water level is too low, or because the air and the fumes are bad, or because there is too much chlorine in the water. The pool is 25 yards long. Standard Olympic-sized pools are 50 meters long.

White, 23, does have the advantage of working with two knowledgeable and caring coaches, Jim Ellis and Tracy Freeland. Both helped cultivate her talent to the point where she was able to earn the attention of Virginia coach Mark Bernardino.

But no other world-class swimmer does what White does.

"Brielle probably wouldn't have to face those obstacles if she was a white girl from the suburbs," said John Cruzat, Diversity Specialist for USA Swimming, a position created in April 2006 to attack the dearth of competitive minority swimmers. "Jim Ellis at PDR has to fight for everything he gets. In the urban centers, facilities are typically not positioned like they are in suburban socioeconomic areas. Brielle is getting quality coaching, but that's sometimes rare in urban areas. We're trying to bring equity to those areas, create facilities where urban swim clubs can exist and where these kids can get the type of training and facilities that they need."

"She's getting great coaching from Ellis and Freeland, who would do anything for her," he said. "She's living at home and working. I don't think any other swimmer at her level is doing the things she is, while doing it at a world-class level." 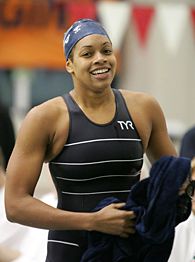 White, who graduated from Virginia in May 2006 with a bachelor's degree in American politics and a minor in history, started swimming when she was 3, "when my mom threw me into the pool," Brielle says laughing. She's competed since she was 6, and emerged as a national-caliber swimmer at age 10. Her high school, Springside, an all-girls private school in the Chestnut Hill area of Philadelphia, didn't even have a pool or a team when she was there. Yet White competed, and beat, high school girls in the backstroke as a seventh grader.

White, now 5-foot-10, was always tall for her age. The other thing she always had was speed. No one was able to keep up with her.

"Ever since Brielle was 9, you could tell she was special," said Freeland, a PDR swimmer who competed for Howard University. "She's been ranked nationally in the backstroke since she was 9, and each girl ranked ahead of her made the Olympic team. But she's always been by herself. She never let anything intimidate her, where other teams had 20, 30 swimmers on their team, PDR or Springside just had Brielle."

It was more than speed that set White apart, Freeland said. White would irritate some of her Caucasian counterparts by winning. "Because you're black, they think you don't do anything but sprint," Freeland said. "But at PDR, we have a good endurance base. There is a prejudice out there.  A lot of kids growing up would get frustrated, because Brielle is so naturally talented."

White never experienced overt prejudice, though her first day at Virginia a white male teammate asked if she came from a "sprint-based" club team. She arrived at Virginia with her best time in the 100 backstroke already better than the school record. There were the assumptions outside the pool as well.

"I'd always get asked if I played basketball or ran track," White said. "I realize that, theoretically, there aren't very many black swimmers."

So that's what she became on campus, "the black swimmer."

"That was me, no one knew my name, I was, 'You're that black swimmer.' I really didn't care about that, because at least they knew there was a black girl on the swim team," White says. "It was good that they knew our swim team was that diverse."

She says she might have had it a little easier than other black swimmers before her, especially male swimmers.

"There were teammates on PDR that had their competitors say derogatory things to their face like, 'I'm going to beat you, n-----.' I wasn't told that until years after it happened. I probably never heard the word before. But no one was ever blatant like that with me.

"What I experienced being African-American and being good, was that other people doubted our leadership abilities. If you're good at what you're doing, and people on your team and even your coach, doubt your leadership abilities, even though you have those abilities, that can hurt. I've found that even applies to the workplace. You can go but so far, so it's been hard to get people to believe in you. Being the only African-American swimmer at Virginia, I felt that I was doubted, and I succeeded. If I was a white swimmer, that wouldn't have been the case."

She'll continue her grueling pace. Monday morning, drop dad off at the train station at 5:30 a.m., catch a two-hour nap and then be at work by 9 a.m. Leave work at five and work her way through Philadelphia rush hour for 40 minutes, and try to be in the water by 6 p.m.

She swims 6,000 to 8,000 yards, and finishes around 8 p.m. Then she does vertical kicking drills in the diving well with her arms wrapped around a 5-pound brick held to her chest for another 15 minutes.

"I fall asleep easily, the hard part is waking up," White says. "I don't get out very often, mostly because I don't feel like it, because I'm always tired. Every Monday through Friday is like a race -- 'ready, set, go.'"

Though she had a chance to swim with the Germantown Academy Aquatic Club, one of the country's elite club teams located in the Philadelphia area, White has stayed at PDR. She's revered by her younger PDR teammates. They view White as an example of what swimming could bring them.

However, simply learning to swim is much more important than becoming a competitive swimmer. African-Americans between the ages of 5 and 19 drown at a rate 2.6 times higher than their Caucasian peers, according to a Department of Health and Human Services Center for Disease Control and Prevention survey from 2002 to '03. That's because most urban swimming facilities are substandard or poorly maintained.

"If my success will make other African-American girls, and even girls from other backgrounds, think about swimming, that would be great," White said. "If I could be the Tiger Woods or Serena Williams of swimming, I wouldn't mind. It's all about creating more opportunity for inner-city kids. That's all I want. I want cities to look at swimming as another outlet by putting money into their rec departments."

Winning at the Pan-Am Games would be a start. It could lead to a sponsorship deal for White with a major sports apparel manufacturer.

"If I'm going to swim next year, I won't be working like this. This year has been a test for me. I'm thinking seriously about making changes, that if I do swim, working full-time is not a smart thing to do. I need health insurance, I have car payments. It's still tough. Sometimes you just want to get out. It's draining. It is a real tug-of-war, because swimming is something I've done all my life. But I think it's worth sticking with, because I feel I can accomplish something. Everyone has to hang up their goggles eventually. That day will be a sad one, but I want to stay with it a little longer."