As U.S. secretary of state, Condoleezza Rice is astute on the subject of international affairs.

She could ace an aptitude test on football, as well.

When Rice was born, a football was waiting for her in her crib, courtesy of her father, John Rice, then a high school coach and athletic director in Birmingham, Ala.

"He had the football; he got a girl," she said, laughing at the recollection.

Rice, an only child, quickly showed her father she shared his passion for the game. By the time she turned 3, they were watching telecasts of their favorite team, the Cleveland Browns. The Browns at the time, under Paul Brown, were one of the NFL's earliest integrated teams, and they attracted a large, national African-American fan base.

Rice was so enamored with Brown that after he was fired by the Browns and founded the Cincinnati Bengals in 1967 -- their first season was in 1968 -- she switched her allegiance to the Bengals. 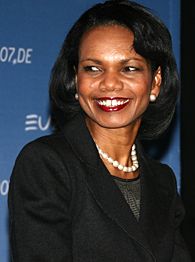 Later, after Rice's father joined the University of Denver faculty in the late 1960s, a number of Denver Broncos players visited the Rice house, where football often was Topic A. The players were astonished at Condoleezza's penetrating questions on the game's X's and O's, an acumen she retains.

"Everybody always is [surprised], and they don't understand," she said. "I probably would have written several more books had it not been for the NFL on Sunday."

In the college game, she roots for Stanford University, where she spent nearly two decades as a professor and provost, followed by Notre Dame and Alabama. While at Stanford, Rice was involved in hiring two minority football coaches, Dennis Green and Tyrone Willingham.

Rice also follows the NHL. Colorado and San Jose are her teams.

As a teen, Rice skated for five years with the Denver Figure Skating Club. She called herself a mediocre performer but relished the discipline the sport provided. In retrospect, she believes her 5-foot-8 frame was better suited for tennis, a sport she does not play. Last year, she took up golf, which remains a work in progress. To stay fit, Rice works out on a stationary exercise machine, time permitting.

To the amazement of many, Rice has never missed viewing a Super Bowl since the first game in 1967. Her closest call came a few years ago when she was meeting with Israeli officials in Jerusalem.

Rice, 52, is back rooting for the Browns. She's aware the team has the third pick in the upcoming draft. When asked whether she has any suggestions, Rice launched into a detailed briefing on the team's weaknesses in the defensive backfield, on the offensive line and at quarterback. Her advice?

"I'm very anxious that they get the best athlete available. I don't think they can position draft."

In a phone interview from her office on the occasion of Black History Month, Rice talked to ESPN.com about her dream sports job, race and sports, and some of her favorite sports moments.

How important were athletics in the integration of America?

I think athletics were extremely important  because of some of the great barrier breakers, like Jackie Robinson. But I would go back before that to someone like Jesse Owens. It didn't lead immediately to a breakdown of discrimination by any means. In fact, these people themselves experienced discrimination. But I do think that everybody could get behind Althea Gibson and, a little bit later, everyone loved Arthur Ashe. And so these people, in a sense, transcended race. [The fans] just didn't see race, they saw someone they admired, someone that they wanted to be.

African-Americans have made great strides on the playing fields and in the coaching and managerial ranks in professional sports. But they lag behind in administrative positions. And, in college, only seven of 119 Division I-A football coaches are African-American and 6 percent of women's basketball coaches. What needs to happen for that to change?

People need to start looking outside their normal channels. And recognize that talent is not necessarily four phone calls to get the top candidates from four people you know. I know a little bit about recruiting college coaches. And you can very easily fall into that. You call four people and they give you their top two or three candidates and you look up and none of them are African-American. And so you have to push beyond the point of normal channels. I'm proud of the fact that at Stanford we had two black coaches, and I'm pleased and very proud I was involved in the hiring of both of them.

You once said being NFL commissioner is your dream job. Why?

Well, because I think there's no more interesting and better-run institution than the NFL. When I look at the way the NFL has made football the national sport. I know I have a lot of friends, maybe even the president, who would disagree in favor of baseball. I just think when you think that on any Sunday during the season you can go to San Francisco or Miami or Green Bay or Baltimore and you can have essentially the same experience with a little local flavor. And the use of television, which Pete Rozelle, of course, deserves enormous credit [for] in recognizing that essentially football and television came of age together. It's just, I think, a really important national institution. Now, that said, I've decided that it would be all right to run a team, as well. That would a good job.

No, as the president. I told [NFL commissioner] Roger Goodell a few weeks ago that I understood he now had that job and that, unfortunately, my ship came in too early and that I wasn't ready to move.

In the wake of perpetual off-field problems with a number of its players, the NFL is considering a three-strikes-you're-out policy. What are your thoughts on that idea?

I think this is something the league has to look at. Obviously, these are people whose images are important not just to the league but to the nation. But I don't have a view on what they should do.

You're a huge NFL fan. With your schedule, how do you keep up with the sport these days?

Sunday afternoons are usually fairly reliable in terms of time. So I generally go to church and then I watch an NFL game. If there is a game I'm going to miss for some reason, I usually TiVo it and watch it when I can. I don't mind watching a game even if I know the score. Because I've watched it for so long and because my father really understood the strategy, I can watch a game from the perspective of what really is going on strategically. So I can enjoy -- and really do enjoy -- a defensive battle probably more than a high-scoring game.

The New York Yankees are opening a training facility in China. The NBA and NFL are continuing to penetrate the world market. Good or bad for the United States and American sports and why?

How do you use your knowledge of sports, especially professional football, in conversations with the president, male Cabinet members and other men you deal with while working?

It is a great icebreaker. Everyone knows how much I love it. So it's just part of the conversation. The president and I share a love of sports. I think for him that baseball is one, two, three, four and five. But I love to go in and give him a hard time about the Texas Longhorns. Of course, they've been pretty good lately.

Do you talk soccer with European leaders?

Not really. I know that it's a beautiful game but I don't really understand it.

Jim Brown said recently that he believes some African-American football players in the NFL are an embarrassment because of their on-the-field antics, giving credibility, he believes, to racist stereotypes. What are your thoughts on that subject?

That's kind of harsh. I've just always liked what Paul Brown said, [that] when you get to the end zone look as if you were there before. So I'm more on the purist side when it comes to demonstrations. Although I was a fan of the Ickey [Woods] Shuffle.

Name an African-American athlete, past or present, you admire and why.

I admire Doug Williams for what he did. By winning that Super Bowl, he broke the stereotype about black quarterbacks in a very important way. And Art Monk, who I just think did everything quietly and with class. As a result, he may not get the adulation that I think he deserves.

You're a star athlete. Name the sport and your dream moment.

Hitting the winning [shot] in Game 6 of the NBA Finals in front of a stunned crowd in Utah. I've always thought that was one of the last great moments in any sport, any time.

Your favorite sports moment, either as a participant or a fan?

Stanford. (Elite Eight). St. Louis. 1998. Stanford comes back from 11 down with 1:34 to play to beat Rhode Island and go to the Final Four. I was provost, and I got to go out and cut down a piece of the net.

George J. Tanber contributes to ESPN.com. He can be reached at george.tanber@iscg.net.