Forty years ago, one could argue that black college football was as competitive as any played in the country. The same sort of debates about how the Negro Leagues stacked up against Major League Baseball could be had about black college football and the big-time university game. Awash with talent that segregation placed in their laps, historically black colleges and universities consistently produced average, great and Hall of Fame-caliber professional athletes.

But the dawn of integration darkened much of the light seen by athletic departments at historically black colleges and universities. After Southern Cal's Sam "Bam" Cunningham knocked segregated Southern football to its knees in a prime-time game against Alabama in 1970, the doors began to open for black players at schools across the country. As a result, those institutions, underfunded since their foundings, had no advantage over white schools. Once, HBCUs had enough talent to make up for their lack of resources. Now, the talent is gone but the finances are roughly the same.

"There was no such thing as a top black student-athlete going to North Carolina, South Carolina or Clemson or Virginia Tech," Hayes says.

When black athletes from the South became able to stay close to home and play "big time" football, historically black schools entered a new frontier. For decades, they'd had less in terms of facilities, but access to fantastic athletes. Once the athletes had access to the cushier environs of larger, majority institutions, black schools saw fewer top athletes at their doorsteps.

In states like Louisiana, Mississippi and Texas, where talent was great, the dropoff was most staggering. Between 1967 and 1976, Southern University, Grambling, Jackson State, Alcorn State, Mississippi Valley State, Texas Southern and Prairie View produced more than 35 NFL draft picks per school. In the past 10 years, those schools had a total of 15 players drafted.

Since 1997, two historically black schools have won an NCAA college basketball tournament game other than the play-in game: Coppin State and Hampton. And since 2002, a representative of the Southwestern Athletic Conference (SWAC) or MEAC (the only two Division I conferences comprised entirely of black schools) has been in the play-in game every season.

Floyd Kerr, athletics director at Morgan State, says the lack of talent isn't explained simply by integration. He also believes black schools did not properly prepare for a future without the comparative talent advantage they'd held since they began playing football.

"When integration hit and majority institutions began to extract from HBCU talent pools, HBCUs did not counter that by adjusting to compete on the resource side," says Kerr, who was AD at Southern from 2000 to '04. "But the schools that became [black colleges'] competitors, they recognized that to have excellence, from a competitive standpoint, you had to put greater resources in it."

Delaware State is the only black school that ranked among the top 200 (out of 331) athletic budgets in Division I for the 2006 fiscal year. None is in the top 200 recruiting budgets (though information is not available on Jackson State). Of the 20 black schools that compete in Division I, their median ranks of athletic and recruiting budgets are 278 and 292, respectively. Eight schools have athletic budgets ranked 300 or below.

Dennis Thomas, commissioner of the MEAC, says this isn't surprising. Even if schools want to apply greater resources to sports -- as Kerr believes they should've been doing -- Thomas says they only had so much to give.

"It's just frustrating and disappointing. Then we have some people that criticize HBCUs because they don't have a [football] stadium that seats 70,000 or a basketball stadium that seats 20,000, and they have no clue of the role [by the states] has played on historically black colleges and universities."

Hayes says funding disparities aren't as apparent during the regular season, when black schools compete primarily against each other and when an occasional paycheck game against a bigger school is thrown in.

"When I was growing up, you couldn't tell me we were poor because everyone around us was the same way. That's how it is in historically black college football," he says. " . . . Where the disparity is noticed is when we get into the playoffs and, all of a sudden, things start beating us -- video equipment and all the little nuances that go into making a team complete. Then we realize we could have had the extra [graduate assistants] that could have spent an extra three days breaking the film down to a critical level."

That's unlikely to change. Black schools are the most visible and enduring institution remaining from pre-Brown v. Board of Education, the 1954 decision that struck down the "separate but equal" doctrine. Segregation was made illegal because while separation was easy to ensure, the equality provision wasn't possible.

In spite of what appears to be inherent disparity, black colleges have survived and succeeded at producing high-quality students. Kerr, the Morgan State AD, thinks that better revenue-generating models can do the same in athletics, and that they're on the right track.

"There are ways to recreate and recapture some of the competitive edge," he says, "but you've got to be really smart about it."

To Kerr, being smart means applying business models to athletic programs so they can fund themselves instead of being forced to wait for assistance from donors and state legislatures. It also involves looking to the competition for ideas.

"We're not studying the others as well as they're studying us," he says. "We compete within the MEAC and within the SWAC. We need to look and see what other conferences are doing that's making a difference.

"We do the same things [as white schools]. We study film. We exchange film. We travel to the conventions. We do professional development, just like all other schools do. What we haven't done is, we haven't put as much money into our facilities."

Talking about facilities brings the discussion back to recruiting. Plush weight rooms, locker rooms and stadiums catch the eye of recruits, and black schools have difficulty providing such things on meager budgets. But because recruits respond to those amenities, Kerr worked to build the largest stadium video system in Division I-AA (now the Division I playoff subdivision) when he was at Southern and improved the basketball and football stadiums at Morgan State. 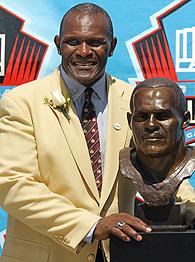 He says Southern raised money for the video system at A.W. Mumford Stadium because the $2.4 million it cost paled in comparison to the $9.5 million it projected to net over a 10-year period. But how, even though Southern is strapped for cash like all black schools, was he able to do things other black colleges claim they can't?

"Universities that make that commitment have a better chance of achieving those ends."

He believes facilities charm recruits and open the door to sell the other positive facets of a program and bring in talent. "When a kid says, 'Hey, you guys have very nice facilities; I didn't know it was like this, it's great,' then they go to other places and see the same thing and see the same quality, you can take that piece of it and say, 'Hey, let's talk about our academics.'"

MEAC commissioner Thomas believes bells and whistles won't do much to help athletes reach what is the ultimate goal to many of them -- going pro. Black schools always have had a disadvantage in facilities, but have turned out many professionals.

"If people tell you that you need to go to a larger university [with better facilities] to go to the pros, that's just not accurate," Thomas says before he rattles off a roll call of Hall of Famers from black colleges that includes Willie Lanier and Harry Carson. "If you are talented enough, you will have an opportunity. The pros get everybody's tapes. They go to everybody's campus. They go to everybody's games. Then they make their decisions."

Facilities also have nothing to do with one of black colleges' greatest selling points -- a smaller, nurturing environment with more individualized attention tailored to the needs and concerns of black students. Thomas says the value placed on becoming a pro athlete makes the campus environment at HBCUs a minor point, something that bothers him. He compares going to larger schools versus a black school as the difference between raising a child in a rich home instead of a less affluent one.

"The character of our children does not hinge on opulent surroundings," Thomas says. "It hinges upon being taught [positive] values that don't cost anything.

"There are people in our society that want to convince our student-athletes and their parents and others that stadiums matter, that size of the weight room matters. But that's not going to help [student-athletes] get a job."

That pitch, one that plays on the low probability that a college athlete will become a professional one, hasn't been effective in helping black schools get in the door with top talent, especially those for whom the pros are a realistic possibility. On national signing day, no football recruit rated higher than two stars (out of five) by recruiting service Rivals.com signed a letter of intent with a black school.

Hayes says recruiting elite black talent has become "all but impossible," which he blames on the media and community expectations rather than facilities. "If there's a super-talented black student-athlete someplace, he even may want to look at a historically black college as one of his choices. But by the time he gets the courage to do it, he's been ostracized by his peers that he's got to have rocks in his head to come here."

But if something stops an athlete from playing at a bigger school, Hayes says, black schools become attractive. After high schools place a hot recruit at a big school, "they'd be glad to call me about a guy with a 1.7 (grade-point average) and want me to fix that deal. 'Come on, homeboy' and all that. If an extremely talented [athlete] comes to a historically black school, we always assume there's a problem somewhere. What is it? Is it an academic problem? Is it an emotional problem? It might be a size problem. But it's a problem somewhere."

And that underscores the difficulties black colleges face. Players once went to black schools because they had no other options, and now the players who attend historically black colleges and universities often do so for the same reason.

HBCUs might not get the top athletes anymore, and the money is still small and comes in slowly. For HBCUs to be the powerhouses they once were, one of those conditions must change.

But it's hard to imagine that will happen anytime soon.

Bomani Jones is a columnist for Page 2. Tell him how you feel at readers@bomanijones.com.