03/22/09
5:55
PM ET
By Adam Rittenberg
MINNEAPOLIS -- On those rare occasions when Sherron Collins gets beat by his man, he listens for Kansas teammate Cole Aldrich.
[+] Enlarge 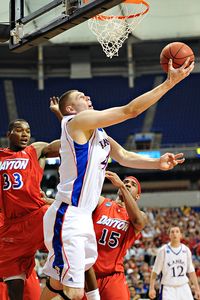 Don McPeak/US PresswireBefore Cole Aldrich on Sunday, no player since Dwyane Wade had pulled off a triple-double in NCAA tourney play.
When Aldrich gives the cue, Collins doesn't even worry about contesting the shot. He just heads to the weak side to rebound.

"He always hollers when he's coming," Collins said. "He makes a goofy sound. It's just like, 'Eahh!' I just know he's coming, and I get out of his way."

Dayton couldn't get out of Aldrich's way in Sunday's second-round matchup with No. 3 seed Kansas. Without any perimeter shooting game to speak of, Flyers ball-handlers repeatedly drove the lane.

Aldrich delivered the most dominant defensive performance of the 2009 NCAA tournament, and made history in Kansas' 60-43 bottling of Dayton. The Bloomington, Minn., native returned to his hometown and produced a stat line that will never be forgotten by Kansas fans: 13-20-10.

Aldrich tallied 13 points, 20 rebounds and 10 blocks against Dayton, the first triple-double in the program's rich history since the stat started being recorded. It marked the sixth triple-double in NCAA tournament history and the first since Marquette's Dwyane Wade went for 29 points, 11 rebounds and 11 assists against Kentucky in a 2003 regional final also played at the Metrodome.

"It's fun," Aldrich said. "I wouldn't have had it anywhere else than being at home. That's one thing that got me amped up a little more was just seeing the familiar faces in the crowd."

Aldrich became the first player in tournament history to record a triple-double with 20 rebounds, and the first to reach the milestone in blocks since LSU's Shaquille O'Neal against BYU in the first round of the 1992 tournament. Perhaps most important, he picked up only two fouls in 31 minutes.

After being "a second off" from recording major blocks totals for much of the season, Aldrich's timing was perfect Sunday.

"I know every time they came in, I had a height advantage and a length advantage," Aldrich said. "I just try to block everything. I was able to stay out of foul trouble that way. I was able to just alter shots even when I wasn't able to block the shots."

Aldrich was asked afterward about his physical development from Jefferson High School to college basketball's greatest stage. Weight was a problem, but not like it is for most college big men.

Jayhawks coach Bill Self smirked and glanced at his blossoming big man.

"Is there anything else you want to say? The size of your biceps?" Self asked.

Aldrich looked superhuman against Dayton, and sharing a stat line with Shaq made an impression on the big man. Though he grew up a Kevin Garnett fan in Minnesota, Aldrich always admired O'Neal.

What would Shaq say about Sunday's performance?

"I wish I could have Shaq's number to ask him about it," Aldrich said.

If he did, he'd probably hear something like this: Nice job, young fella.