While Texas Tech is well-known for its creative and explosive passing offense, the Red Raiders landed an elite 2008 prospect with similar attributes on defense. Under Armour All-American Keanon Cooper (Dallas/Skyline) may be the most versatile defensive prospect in this class and is an excellent pickup for a one of the most prolific offenses in the country currently struggling to keep opponents out of the end zone. The ESPN 150 projected outside linebacker chose in-state Texas Tech over Kansas, Kansas State and Minnesota.

"Staying in-state was just an added bonus. I really liked the school, the campus and the coaching staff at Tech. It was the school I felt most comfortable at," said Cooper.

When evaluating the sixth best defensive player out of the state of Texas in 2008 last spring, we were more impressed with Cooper as a total football player than with his excellent physical skills. There was not one defensive position where this kid did not shine and wreak havoc. Whether employed at strong safety, outside linebacker or even defensive end, Cooper showed tremendous instincts and playmaker-type qualities.

As we collected senior film of this impressive Skyline athlete, we saw the added bulk and improved explosiveness needed to be productive weakside linebacker at the next level. Cooper's first step quickness and jump to the football are excellent. If he is covered up and allowed to pursuit backside, we project this kid will turn into a tackling machine at Tech. The power this kid generates in the short area for a 195-pound defensive prospect may be his most striking attribute; ESPN's No. 12-rated outside 'backer plays bigger and faster than his listed measurables and should be able to hold his point versus front side run as well.

We project he will work his way into early blitz packages with his outstanding closing speed combined with his quickness and experience as an edge player. Great range and current size make strong safety a good possibility early in his career, but with a good frame for continued physical development and better vertical attacking skills than lateral, a slide up to linebacker is more than likely.

"The coaches like me at strong safety and it was great watching film with them and seeing how they want to use me," explained Cooper.

When asked about the possibility of linebacker, Cooper acknowledged the Red Raider coaches saw similar attributes as the Scouts Inc. staff. <>

"They like my ability to play down in the box and my explosiveness off the edge. They plan to move me around a lot and get me involved like a linebacker."

Cooper is Mike Leach's 15th commitment heading into signing day including four JUCO prospects. While the class does not feature many top-tier prospects, there is an emphasis on defense which helps fill roster needs in an effort to create balance with its high-scoring offense. Joining Cooper on defense is end Joey Fowler (Oklahoma City, Okla./Westmoore), another explosive and potentially disruptive prospect with the physical tools needed to provide much needed pressure off the edge for Tech.

After much assumption over the past month, Omar Hunter (Buford, Ga.), ESPN's No. 2-rated defensive tackle, finalized what many thought was inevitable -- a commitment to the Florida Gators. A longtime Notre Dame pledge, Hunter is Florida's sixth ESPN 150 prospect to pledge in just the past three weeks alone, and the Gators are without a doubt one the hottest programs right now heading into signing day.
[+] Enlarge 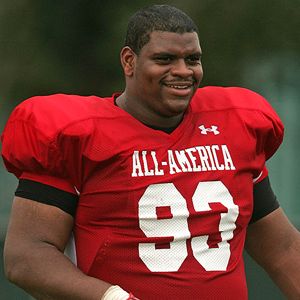 Gary Bogdon for ESPN.comOmar Hunter decommitted from Notre Dame during the week of the Under Armour Game.
While in Orlando as an Under Armour All-American, Hunter was one of few prospects who actually appeared more impressive evaluating live than off game film. The Georgia native may have lacked an inch from his previously listed height measurables, but he looked extremely powerful and explosive firing off the ball and was virtually impossible for some of the country's elite interior lineman to block at the point of attack. Ranked No. 37 in the ESPN 150, Hunter is a supreme blend of size (300lbs), strength and rare quickness in the trenches. A complete package with his disruptive pass-rushing skills, look for this kid to challenge for early reps next fall in defensive coordinator Charlie Strong's defense.

Urban Meyer has to be pleased with the group of top-tier prospects recruiting coordinator Chuck Heater has coming to Gainesville; Hunter is Florida's 11th ESPN 150 member out of its 20 total prep commitments. The Gators may end up with a smaller 2008 class come February 6 but will arguably have some of the best premium talent on both sides of the ball and make a push for another top-five recruiting class (Florida recently jumped up three spots from No. 10 to No. 7 in ESPN's latest class rankings).

With much hype about Tim Tebow and Florida's explosive offense, Gator fans could be talking about its defense over the next four years in Gainesville. At defensive back, Will Hill (West Orange, N.J/Saint Peter's) and Dee Finley (Auburn, Ala.) are impressively the county's No. 1 and No. 2 ranked safety prospects, and Janoris Jenkins (Pahokee, Fla.) recently jumped up to the No. 4 corner slot. Shifting down to linebacker, the Gators recently snatched two good ones from Miami in ESPN's No. 3 and No. 6 ranked outside linebacker prospects, Ramon Buchanan (Melbourne, Fla./ Palm Bay) and Lerentee McCray (Dunnellon, Fla.). When you insert 235-pound 'backer Brendan Beal (Bethlehem, Pa./Liberty) to the middle and now Hunter up front, the Gators have seven top-10 positional prospects on defense, including five in the top five.

Subscribe to ESPN+ to get access to all premium articles, Fantasy tools, plus thousands of your favorite sporting events and ESPN Originals for just $6.99/mo!