As Maria Sharapova began her service motion, Patty Schnyder, not quite ready across the net, raised her hand to call time. Sharapova, who later said she didn't see Schnyder's signal until her follow-through, hit the serve, which a flat-footed Schnyder did not attempt to return.

The chair umpire ruled it an ace. Schnyder complained, and the crowd watching the fourth-round match at this year's French Open whistled their collective disapproval in the European fashion. For the rest of the match -- won by Sharapova 9-7 in the third set -- the spectators rooted strongly against the comely Russian.

"It's tough playing tennis and being Mother Teresa at the same time," said Sharapova, sulking after the match.

The incident recalled a similar conflict between Serena Williams and Justine Henin in the semifinals of the 2003 French Open. Henin raised her hand for a timeout -- a signal that eluded the chair umpire -- and Williams, assuming she would get two fresh serves, hit a soft-serve into the net. When Henin didn't acknowledge the sign, Williams was furious. She was charged with a fault and eventually lost her composure -- and the match. 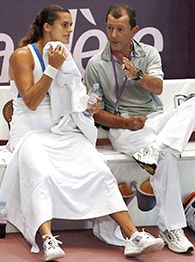 The genteel sport of tennis, in which the majority of the world's players make their own line calls, is not often associated with the crass art of cheating. Still, there is a vast gray area in the professional game known as gamesmanship that Schnyder would argue Sharapova entered in their match at Roland Garros. Clearly, players are willing to bend the rules to their advantage.

In recent years, four Argentines -- Juan Ignacio Chela and Guillermo Coria (2001), Mariano Puerta (2004) and Guillermo Canas (2005) -- have been suspended for doping, among others. Still, these are the rare exceptions to the rule. Currently, tennis officials are investigating why a British online gambling company received about $7 million in wagers -- 10 times the usual amount -- for an Aug. 2 match between world No. 4 Nikolay Davydenko and No. 87 Martin Vassallo Arguello at the Orange Prokom Open in Poland. Most of the money was placed on Arguello, who won when Davydenko retired in the third set with a foot injury. ATP executive chairman Etienne de Villiers said in an e-mail to The Associated Press that "independent, external resources" would be used to look into the suspicious betting patterns.

The transgression cited most often by those in the game is in-match coaching. This is an accepted practice in Davis Cup, Fed Cup and selected WTA tournaments, but it is against the rules in most professional tennis events, including the Grand Slams.

"Happens all the time, definitely," said U.S. Davis Cup captain Patrick McEnroe. "If you're coaching a player and they hit their first kick serve of the match, you yell, 'That's the way to do it.'"

In other words: Do it again.