Lester Hayes noticed the lanky, veteran receiver with the shaggy hair strolling toward him, but he couldn't figure out what Fred Biletnikoff wanted. The year was 1977, and Hayes was merely a rookie cornerback for the Oakland Raiders, a player hoping to make a big impression in his first preseason game. Biletnikoff was a future Hall of Famer, one who casually dabbed a gooey, brownish-yellow substance on Hayes' fingers. 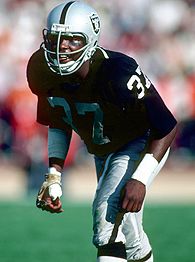 "Try that, rookie," Biletnikoff said before walking away and leaving Hayes confounded. "I thought," said Hayes recently, "that Fred had put axle grease in my hands."

There are days when Hayes still looks back at his introduction to Stickum and laughs at what it did for his career. Before that moment, he was just a former college linebacker hoping to become a serviceable NFL defensive back. After that day, he became the face of a team that literally would try any tactic if it helped produce a victory on Sundays.

Hayes might have been too young to recall exactly when Raiders owner Al Davis coined the notorious phrase, "Just win, baby," but the images of Hayes' Stickum-coated jerseys are undisputed evidence that he was a devoted believer in that philosophy.

Hayes played on two of the Raiders' three Super Bowl championship teams, and he wasn't the only player who knew how to gain an advantage.

"The sole focus of our team was to win consistently," said Hayes, who helped the Raiders win Super Bowls XV and XVIII. "Whether it was a mental or a physical advantage, we were going to do whatever was necessary to win. Our attitude was that if we could get away with something, we were going to do it."