Kansas City Chiefs coach Herm Edwards uses a familiar message to end the speech he gives his team on Saturday nights before games.

Although he can be notoriously loquacious, Edwards refrains from drawing upon predictable clichés or gimmicky references in such moments. Instead, he delivers a brief, pointed statement that leaves his players knowing exactly what their responsibilities are.

"I tell them to do whatever it takes to get ready to play," Edwards said. "As long as it's legal, I want them to do it." 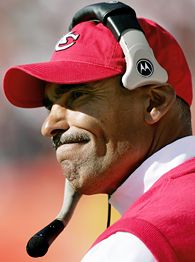 The operative phrase here is "as long as it's legal." Although Edwards isn't encouraging his players to break rules, he does emphasize that they need to understand a simple tenet of survival in the NFL: Gamesmanship, even if it falls into the category of cheating, is a way of life. In other words, if a man isn't looking for a way to gain an advantage, he's really courting plenty of heartache. Losing in the NFL is bad enough. To lose without using everything at your disposal, well, that's a fate nobody wants to accept.

It's a reality players and coaches all eventually learn. They might see offensive linemen tightening their jerseys so defenders can't grab their uniforms and create crucial leverage. They may hear about the manipulation of an injury report to hide a star player's health status. They also probably know about more covert behavior -- such as exotic cocktails that generate higher energy levels for players during games or coaches who scan reams of game film in search of information on an opponent's audibles.

As Tampa Bay quarterback Jeff Garcia said: "Everybody in this league is trying to find a way to get away with something that creates an advantage. If they get caught doing something, they'll get penalized. But if they don't, they'll keep doing it as long as they can."