GREENVILLE, S.C. -- The overgrown lot on East Wilburn Avenue is where Shoeless Joe Jackson lived out his days. Once, a house stood here. Now, there's just rubble and a few remnants of a foundation.

Lester Erwin, a former high school baseball coach and one of the last surviving relatives who actually knew the disgraced ballplayer, walks over broken bottles and bricks. He finds where the living room was located, then the fireplace. Finally, he's standing in Shoeless Joe's study. It's where Jackson would go over the ledgers from his liquor store. Right by his desk, he kept his famous bat, Black Betsy, propped up, the familiar wooden handle always a reach away. Sometimes, he sat in there listening to baseball on the radio, surely wondering, imagining, dreaming. 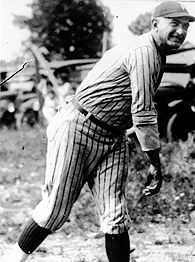 Erwin stands in the spot, still for a moment.

"This is probably the outside of that wall," he says.

The house was moved not long ago, to downtown Greenville. It'll be a museum near the minor league ballpark, forever gone from this working-class neighborhood that's been in slow decline since Joe and Katie Jackson died. There's not much of Shoeless Joe left. A handful of people who remember him. A headstone in a local cemetery. But the repercussions of the 1919 World Series live on. Such is the stigma of cheating; a man cannot escape it, even in death.

But down here, don't bad-mouth Shoeless Joe Jackson. Fifty-five years after he died, his family is still fighting to clear his name. Relatives point to his batting average in the World Series. They point to the kind of man they knew, who showed the neighborhood kids how to throw and catch.

Leading the fight is Erwin, who inherited Black Betsy, which he finally sold at auction a few years back to set up an inheritance for his children. He has written letters to the commissioner, helped collect reams of data. He has a room in his house dedicated to Joe, who died when Lester was 5. Every weekend, they'd make the short drive to go visit him.

"I can remember being in that front yard with my dad and Joe like it was yesterday," Erwin says. "I can still see Joe sitting in that lawn chair."

As a young boy, Lester knew Joe had been a ballplayer; there were still trophies around the modest little house. It wasn't until he was almost a teenager that he learned the whole story. Going through some boxes in their attic, he came across newspaper stories about the scandal. Joe had kept them, tucked away, a chronicle of the death of his dream.

Erwin saw words like "cheater" and "gambler" and "Black Sox." He asked his father, who replied, "He didn't do it."

"My dad truly believed he was innocent," Erwin says. "For no specific reason except for knowing Joe."

Outside, the world might have viewed Joe Jackson as a man who sold out the national pastime. But in South Carolina, people closed ranks. Neighbors protected Joe. They defended him.

"When he finally came back to Greenville, he was accepted," Erwin says. "There was no one who was going, 'You cheater.'"

No one ever found out what happened to the money he took from gamblers. Friends of the family have heard Katie gave it to a children's hospital, but there are no records left. Joe settled into a quiet life. He ran his liquor store, in a building where they now sell furniture. But Joe knew what some people thought. Once, he turned around to find Ty Cobb in the store. He didn't say anything. 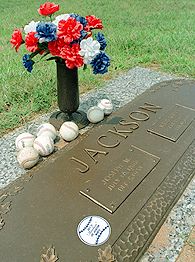 "Sure, I know you, Ty," Joe said, "but I didn't think you knew me after all these years. I didn't want to embarrass you or nothin'."

When Jackson died in 1951, he took his secrets with him. Did he cheat, or didn't he cheat? Really, no one knows. Here are the facts. He took $5,000 to throw the World Series. Then he batted .375 and committed no errors. He says he tried to give the money back. A jury acquitted him. The game of baseball never did, so he died labeled a cheater. He denied his involvement until the end.

"Katie's probably the only one who knew," Erwin says.

So his family members must trust their memories. They continue to fight, hoping for the day when they can gather in Cooperstown and celebrate their name.

There's the rub. Eventually, time erases all living record of us. First we die. Then our friends die. Soon, there's no one left who ever met us. We become a collection of decaying artifacts. In Shoeless Joe Jackson's case, he will be a verdict, rendered by Kenesaw Mountain Landis so many years ago, that brands him a cheater. That's why people are still fighting so hard.

They are their old friend's last chance at redemption.

"I just hope when people like myself are not around anymore, people will be as passionate about this as we've been," Erwin says. "If there's no one passionate after this group is gone, it's gonna die."