"Doug's career is about winning. All this other stuff is secondary that folks talk about. Is he big enough? Can he throw it down the field? Doug is really wired to win," says former Boston College teammate Gerard Phelan on ESPN Classic's SportsCentury series.

Even his name sounds magical: Flutie.

This 5-foot-9¾ Pied Piper, resolute and irrepressible, also traveled through numerous towns and left behind enchanted converts and fond memories. His story is scripted like a fairy tale -- moments of doubt, moments of triumph, moments of redemption. But this is fact, not fiction; he really did pull it all off. 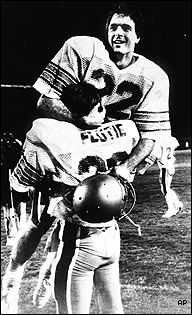 Doug Flutie will be remembered for one of the most memorable moments in sports history -- a 48-yard "Hail Mary" touchdown pass to defeat the reigning national champions of the Miami monolith. That play may have sealed the Heisman Trophy, but it didn't erase the reservations that the powerbrokers of the NFL had about him. Their league, they sneered, would swallow Tinker Bell in one greedy gulp.

So Flutie would wind up going north, across the border, and becoming a star in the Canadian Football League, winning six Most Outstanding Player awards in eight seasons. But even that couldn't convince the skeptics to the south.

"The way it's always been for me in the NFL is that I'm a risk for a personnel director," Flutie said. "I don't fit the mold. If they take a chance on me and I fail, they also fail."

While he may not have always had the support from the front office, everyday fans loved his everyman ways. And while on the field he's pulled out many rabbits, off the field he's had to face a greater obstacle by living in a world where patience is not just a virtue, it's essential.

In 1994, Flutie's son, Doug Jr., who was not yet three, showed symptoms of autism. "Sentences become words, words become nothing," Flutie said. A teenager now, Dougie cannot even say his own name. In 1998, Flutie started the Doug Flutie Jr. Foundation for Autism, which financially aids disadvantaged families who are affected by the disease.

Douglas Richard was born the third of four children to Richard and Joan Flutie on Oct. 23, 1962 in Baltimore. The family moved to Melbourne Beach, Fla., when Doug was six. When he was 13, they settled in Natick, Mass., a working-class suburb about 20 miles southwest of Boston.

At Natick High School, Flutie was a quiet kid who says he didn't drink, smoke or swear. "I was on the honor society in my senior year with straight A's, but my whole life revolved around sports," he wrote in his biography, Flutie. 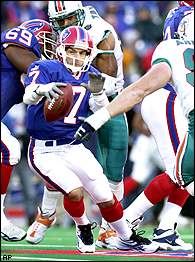 He started at quarterback for three seasons. Although he was all-state as a senior, Boston College was the only Division 1-A school to offer him a football scholarship. In Flutie, he wrote that as a freshman in 1981 he was "probably about eighth on the depth chart" during training camp before moving up to No. 4.

In the fourth game, after the starting quarterback went down with an injury and the number two and three signal-callers failed to perform, Flutie got his opportunity. Entering with BC being blown out 38-0 by Penn State, he passed for 135 yards and a touchdown. "It was like somebody flicked on a switch," Eagles coach Jack Bicknell said. Flutie finished the season with 1,652 yards passing and nine touchdowns.

In his final three seasons, Flutie led BC to 27 victories. He also took the Eagles, who had not been to a bowl game since the 1943 Orange Bowl, to three of them. He thrived on bringing big-time attention to the small school.

The most attention came on the day after Thanksgiving in 1984, against 12th-ranked Miami, when Flutie threw for 472 yards to become the first 10,000-yard passer in major-college history. But one spiral catapulted him from star to legend -- on the game's last play, with BC trailing by four, Flutie gunned the ball 64 yards into the end zone to his roommate, Gerard Phelan, for a 47-45 victory.

A week later, Flutie won the Heisman, having passed for 3,454 yards and 27 touchdowns, both school records. The Eagles finished 10-2 and fourth in the UPI poll and fifth in AP after a 45-28 victory over Houston in the Cotton Bowl.

In 1985, the 175-pound quarterback became the third straight Heisman winner to join the USFL, agreeing to a six-year, $8.3-million contract with Donald Trump's New Jersey Generals. In 15 games that season, he threw for 2,109 yards and 13 touchdowns. But the USFL folded the next year and Flutie needed a new home. 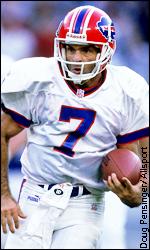 Drafted in the 11th round by the Los Angeles Rams in 1985, his rights were traded the next year to the Chicago Bears, who signed him halfway through the 1986 season. With Jim McMahon and Mike Tomczak injured, Flutie started the last game of the regular season and a first-round playoff loss to Washington. He was disliked by McMahon, who would later call him "America's midget" and "Bambi."

Flutie was traded to the Patriots in October 1987, but threw passes in only one game. The next year, after coming off the bench to spark the Patriots to a comeback win over the Colts, he led them to six victories in nine starts. But he started only three games in 1989 and was released after the season, having completed just 36-of-91 passes.

Although unwanted by the NFL, Flutie found the perfect venue for his skills in the Canadian Football League, where the fields -- 10 yards longer from goal line to goal line and 11 2/3 yards wider -- were more suited to his scrambling abilities and improvisational style. In July 1990, in his first game for British Columbia, he threw a 37-yard touchdown with one second left to tie the game. The following season, Flutie threw for 6,619 yards, a pro football record, and won his first of four straight Most Outstanding Player trophies.

A free agent in 1992, he signed with Calgary for $1 million annually and 10 percent ownership of the team. He responded with an MVP performance, guiding the Stampeders to the Grey Cup (Canada's Super Bowl). In 1994, he set a CFL record by throwing 48 touchdown passes. Flutie finished his CFL career with the Toronto Argonauts, leading them to Grey Cup titles in 1996 and 1997. 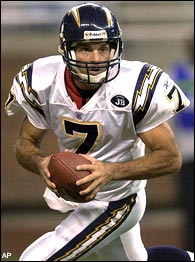 In 1998, Flutie moved back to the States, joining Buffalo. He had expected to start, but after the Bills signed free-agent Rob Johnson, he was on the bench. When Johnson went down in the fifth game with a rib injury, Flutie took over and led the 1-3 team to a 9-3 record and a wild-card berth. Throwing for 2,711 yards and an NFL career-high 20 touchdowns, he earned the AP's NFL Comeback Player of the Year award.

Flutie's following two seasons were marred by a very public quarterback controversy. While Johnson had the stronger arm, Flutie got better results. In his three years with the Bills, in the games he started, Flutie was 21-9. Johnson was 8-10, and often injured. However, it was the 38-year-old whom management released following the 2000 season.

He shuffled off from Buffalo to San Diego, where he started all 16 games in 2001. He threw 15 touchdown passes and an NFL-career best 3,464 yards. The next three seasons, he played the role of mentor to Drew Brees, starting only six games. Released by the Chargers in 2005, he returned to New England, this time as a backup to Tom Brady. At 43, he was the oldest position player in the league. After one season with the Patriots, Flutie retired and in 2006, he joined ABC/ESPN as a college football analyst.

In his 12 years in the NFL, Flutie started 10 or more games in only three seasons. He finished with 14,715 yards passing, 86 touchdowns and
68 interceptions. But more important than the numbers was his legacy as the little man who played big.