"He's cast a very long shadow over the game of basketball. And if basketball had a Mount Rushmore, Dean Smith's face would be on it," says former Duke star Jay Bilas on ESPN Classic's SportsCentury.

Unlike most great empires, Dean Smith's never had to endure a period of decay. Smith resurrected the North Carolina men's basketball team in the 1960s, after it had been placed on NCAA probation, and maintained a program that for three decades was as respected and emulated as any in the sport. 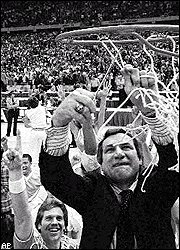 Sure, Smith's 879 career victories, the second-highest total in NCAA men's basketball history, grab your attention. But the real unfathomable numbers relate to the consistency of his teams: 27 straight seasons with at least 20 victories and a record 23 consecutive NCAA Tournament appearances, including a 13-year stretch in which the Tar Heels reached the Sweet 16 every season.

Along the way, Smith won two national championships. His 65 victories in the NCAA Tournament and 11 appearances in the Final Four rank second. And Smith is one of only three coaches to have won the triple crown: NCAA Tournament, NIT and U.S. Olympic gold medal.

In 36 seasons, Smith coached nine consensus first-team All-Americans, 13 Olympians and 96 percent of his lettermen graduated. "His record is excellent and he's won with good kids, the kind who graduate and go on to do things outside of basketball when they graduate college," former Duke coach Bill Foster said.

Smith integrated the Tar Heels in 1966, having recruited Charlie Scott, the first African-American scholarship player in the school's history. But Smith had turned his back on the prevalent racism in the South before. At a time when blacks were routinely denied service in restaurants, he used his position of influence to help integrate Chapel Hill by dining at a restaurant with an African-American theological student. In 1965, Smith helped a black North Carolina graduate student, Howard Lee, purchase a home in an all-white neighborhood in Chapel Hill. Four years later, Lee became the town's mayor.

"[Smith] is the best person I have ever known and no one else is even a close second," said Eddie Fogler, who played for Smith and later coached under him.

Loyalty was Smith's trademark, particularly with his former players. In his autobiography, A Coach's Life, Smith lists every Tar Heels player he coached. Coaches who call Smith their mentor include Roy Williams, Larry Brown, George Karl and Billy Cunningham, all of whom played for Smith or worked under him. But Smith was equally proud of those who didn't follow into coaching.

"It's not just the great ones I remember," Smith wrote in his autobiography. "I remember each of them, and not just as ballplayers."

An innovator, Smith is credited with developing the Four Corners offense, the foul-line huddle and the run-and-jump defense. His penchant for slowing games with his Four Corners attack in large part led to the NCAA putting a shot clock in the game. 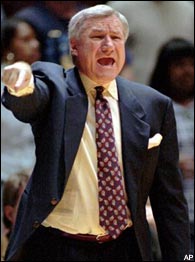 Smith retired in 1997 -- 14 years after he was enshrined in the Basketball Hall of Fame -- with an 879-254 record (.776 winning percentage). His teams won or tied for the Atlantic Coast Conference regular-season title 17 times.

The younger of Alfred and Vesta Smith's two children, he was born on Feb. 28, 1931 in Emporia, Kan. Both parents were educators. Alfred also coached football, basketball and track at Emporia High School. In 1934, when Kansas high school basketball teams were strictly segregated, he brought a black player onto his all-white team. Dean gained an early appreciation for sports and grew up talking strategy with his father.

The family moved to Topeka in the summer of 1946 after Dean completed ninth grade. At Topeka High, Smith -- at 5-foot-10 and 160 pounds -- played quarterback, point guard and catcher, keeping him involved in the decision-making in the respective sports. He earned All-State honors in basketball as a senior and accepted an academic scholarship to Kansas.

Playing under legendary coach Phog Allen, Smith was a reserve guard for the Jayhawks, who won the 1952 national championship in his junior season and lost in the NCAA title game the following year. He also played baseball at Kansas.

A math major, Smith considered applying to medical school as graduation neared, but instead briefly served as a graduate assistant coach for KU in 1953. The next spring he entered the U.S. Air Force to fulfill his ROTC commitment. Before being sent overseas, he wed Ann Cleavinger, with whom he would have three children. The couple divorced in 1973. He married his second wife, Linnea, a physician, in 1976; they have two daughters.

After Smith returned to the states in 1955, he began a three-year stint as an assistant coach to Bob Spear, whom he met in Germany, at the newly opened Air Force Academy. In 1958, he was lured to North Carolina by Frank McGuire. When McGuire left three years later, with the program on probation for rules violations, Smith, 30, was promoted to the head job. Smith endured early growing pains, and his only losing season as a head coach came in his first campaign (1961-62) when the Tar Heels went 8-9. In his next two years, he compiled a 27-18 record.

In January 1965, after losing 107-85 at Wake Forest, the Tar Heels returned to campus and found an effigy of Smith hanging from a tree. A week later, he was hung in effigy again after a loss to North Carolina State.

Smith's breakthrough came in 1966-67, when he led North Carolina to a 26-6 record and the first of three consecutive regular-season and ACC tournament titles. Although the Tar Heels reached the Final Four in all three seasons, the only time they advanced to the final was 1968, when they were routed by UCLA, 78-55.

In 1971, North Carolina won the NIT and a year later it again made the Final Four.
Named head coach for the 1976 Olympic team, Smith made it his mission to restore U.S. glory, four years after the Americans had been "robbed" at Munich in a loss to the Soviets. Never known for talking about winning, Smith spoke openly about capturing gold. He got his wish with a 95-74 victory over Yugoslavia. 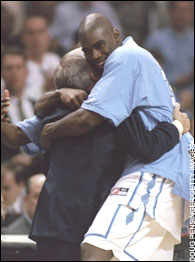 In 1977, North Carolina returned to the Final Four, with the Tar Heels losing 67-59 to Marquette in the title game. Smith's critics complained, contending that his Four Corners approach kept the Tar Heels from realizing their full potential. In 1981, they lost another final, this one 63-50 to Indiana. North Carolina fans again wondered if Smith would ever bring a national championship to Chapel Hill.

Their prayers were answered only a year later when freshman Michael Jordan hit a jumper with 15 seconds left to give North Carolina a 63-62 victory over Georgetown in the final.

The Tar Heels didn't reach the Final Four again in the 1980s, but finished the decade with nine straight Top-10 rankings in the Associated Press poll.

Smith's second national championship came in 1993, when the Tar Heels beat Michigan 77-71 in the final. It wasn't one of Smith's most talented teams, but North Carolina's 34 victories that season set a school record.

Fans saw another side of Smith in the 1995 ACC tournament, where he engaged in a nose-to-nose shouting match with Clemson coach Rick Barnes after Smith criticized a Tigers player for what the coach deemed excessively rough play.

With each passing season, Smith closed in on Adolph Rupp's record of 876 victories. When the Tar Heels beat Colorado in the second round of the 1997 NCAA Tournament, it enabled Smith to pass Rupp. His ride ended at the Final Four, with a loss to Arizona. Smith announced his retirement on Oct. 9, 1997, with four years still remaining on his contract, and handed the reigns to longtime assistant Bill Guthridge.

Since retiring, Smith has mostly blended into the background. He serves unofficially as a Tar Heels consultant, keeping an office at the Dean Smith Center, the 21,000-seat basketball facility that opened in 1986.