"[Dick Vermeil's crying] kind of shocks people the first time they're around it, especially players, because it's not something that's really seen all that often in football," says Chiefs quarterback Trent Green on ESPN Classic's SportsCentury series.

Dick Vermeil received plenty of airtime for crying, but his opponents should be shedding the tears. In two different eras, Vermeil climbed to the top of the NFL coaching profession.

There haven't been many comeback stories better than Vermeil's. Removed from the sidelines for 14 seasons after building a winner with the Philadelphia Eagles, he turned the St. Louis Rams into a Super Bowl champion before returning from retirement again, to coach the Kansas City Chiefs.

Vermeil not only cried after important victories, but also during routine speeches. He also was inclined to hug players and invite them to his home for family dinners. "He loves his players and is dedicated, almost to a fault," linebacker London Fletcher said.

A notorious workaholic who once made a habit of sleeping in his office, Vermeil was a football "burnout." He resigned from the Eagles after the 1982 season, a victim of the strenuous demands he placed on himself. "I'm physically and mentally drained," Vermeil said that day. "I just have to get out of coaching for a while. It's as simple as that."

Vermeil took his expertise to the TV booth and dabbled in motivational speaking before he accepted the Rams' offer in 1997 to resurrect his coaching career. The perception was Vermeil could will his team to victories.

"There are other great coaches, but they had organizations around them," Bill Walsh told Sports Illustrated in 1983. "Vermeil beat them with his own guts and a few people who followed him." 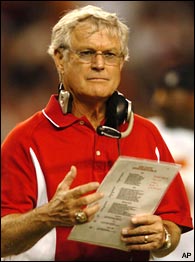 At 69, he retired on New Year's Day 2006 -- after completing his fifth campaign with the Chiefs -- with a career record of 126-114 over 15 NFL seasons. He was one of only five coaches to have taken three franchises to the playoffs.

The second of Louis and Alice Vermeil's four children, he was born on Oct. 30, 1936 in Calistoga, Calif. His father was an auto mechanic who dreamed about working 24 hours in a day. Neither of his parents had graduated from high school. Growing up, Dick worked in his father's repair shop while emerging as a four-sport star at Calistoga High School.

Vermeil wasn't much of a student and his high school guidance counselor recommended a career in his father's garage. But the teenager had his sights set on football.
Nicknamed the "Calistoga Comet," Vermeil excelled most at football, quarterbacking his team to within one game of a league championship as a senior. After playing two years at Napa Junior College, he transferred to San Jose State, where he was a backup quarterback in 1956. The next season he started, but had little success, throwing for 580 yards, one touchdown and nine interceptions on a 3-7 team. He graduated with a degree in physical education and turned his attention toward coaching.

In 1959, he served as an assistant coach at Delmar High School in San Jose while he received a master's degree in physical education from San Jose State. To make ends meet while his wife Carol remained home with their children, Vermeil took odd jobs, such as pumping gas, driving an ice cream truck and digging swimming pools.

The next year, he became head coach at Hillsdale High School in San Mateo, where he compiled a 17-9-1 record over three seasons. In 1963, he became backfield coach at the College of San Mateo and followed that with a 7-2 season as head coach at Napa Junior College. He became an assistant coach at Stanford in 1965.

In 1969, Los Angeles Rams head coach George Allen hired him as the NFL's first full-time special teams coach. The next season he returned to the college ranks, as UCLA's offensive coordinator. Then he rejoined the Rams as an assistant coach for three seasons.

That looked plenty good to the downtrodden Eagles, in the market for a new head coach. Owner Leonard Tose gave Vermeil a five-year contract on Feb. 8, 1976.
From the start, Vermeil was different. After opening his first training camp as an NFL head coach -- on July 4 -- Vermeil screamed for somebody to stop the fireworks outside his window so the coaches could concentrate on films.

The Eagles went 9-19 in his first two seasons, but their breakthrough came in 1978, when he led a 9-7 team into the playoffs. Philadelphia lost the wild-card game to Atlanta.

The next year the Eagles went 11-5 and returned to the postseason as a wild card. They defeated Chicago before losing to Tampa Bay in a divisional game.

In 1980, Vermeil was voted NFL Coach of the Year for guiding the Eagles to a 12-4 record, tied for the best mark in the league. Then they defeated Minnesota and Dallas to win the NFC championship before falling to Oakland, 27-10, in Super Bowl XV.

With a 10-6 record in 1981, the Eagles made their fourth consecutive trip to the playoffs, where they lost the wild-card game to the Giants.

After that season, Carol had a serious car accident, leaving Vermeil shaken and wondering about his priorities. Three months later, both contracted hepatitis during a Caribbean vacation. The seeds had been planted for Vermeil's departure from coaching.

He joined CBS later that year as an NFL game analyst. Beginning in 1988 he worked college games for ABC, but still contemplated a return to the sidelines. "There wasn't a time within those 14 years I didn't think about it," Vermeil said.

Three times (once with the Chiefs in 1989 and twice with the Rams in the 1990s) he rejected overtures to return, deciding he wasn't ready to accept the commitment. Finally, in 1997, Vermeil couldn't refuse the Rams again. He signed a five-year contract worth a reported $10 million to become head coach and president of football operations.

"The offer they made me was so good I couldn't turn it down," he said.

At 60, Vermeil was back, but hardly to immediate success. The Rams went 5-11 and 4-12 in his first two seasons, placing him firmly on the hot seat. And then the situation appeared to get worse when starting quarterback Trent Green was injured during an exhibition game and lost for the 1999 season. 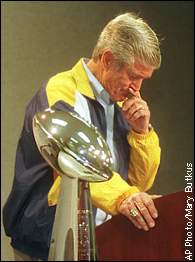 But Vermeil installed untested Kurt Warner at quarterback and the Rams rolled through the regular season, averaging 32.9 points on the way to a franchise-best 13-3 record. After beating Minnesota and Tampa Bay in the playoffs, the Rams held off Tennessee, 23-16, to win Super Bowl XXXIV.

But just two days later, Vermeil retired, saying he wanted to spend more time with his family. As a parting gift, Rams president John Shaw would reward him with a $2-million bonus.

But the vacation lasted only 11 months. In January 2001, Carl Peterson -- the Chiefs president who had been an assistant coach under Vermeil and with the Eagles -- offered his old boss Kansas City's coaching job. Vermeil accepted the three-year deal, which was worth a reported $10 million. He ended up staying five years.

The Chiefs endured a 6-10 season in 2001 before going 8-8 the next year. But the magic reappeared in 2003, when K.C. won its first nine games on the way to a 13-3 record. But the ride ended with a loss to the Colts in the divisional playoffs.

After the Chiefs fell to 7-9 the following year, Vermeil led them to a 10-6 record in 2005, but that wasn't good enough for a playoff berth. On the day the season ended, he made his retirement plans official. And, for one last time as a head coach, he shed tears.