It was a scenario that had been repeated many times before, a good little man versus a good big man: Corbett versus Sullivan, Dempsey versus Willard, and the classic, David versus Goliath. Now it was to be Billy Conn, the former light heavyweight champion who had given up his lighter crown to take on the heavyweight champion of the world, Joe Louis. The fight was to be Conn's 174 ½ pounds vs. Louis' 199 -- their announced weight, although their actual weight was really 169 and 204 -- boxer versus puncher, machine gun versus howitzer.

Many believed that it was not merely a case of the dog in the fight, but the fight in the dog. They conceded that Conn had a chance, a greater one than any challenger since Max Schmeling, and made him the shortest-priced underdog against Louis in three years, an 18-5 dog.

Conn had all the credentials to make this a fight, more so than any of Louis' previous 17 challengers, most of whom charitably fit into the disparaging class known as "Bums of the Month." Billy the kid had gone into battle 67 times before, winning 58 and losing only eight, all by decision. And although he had only twelve KO's to his credit, six of those had come in his last eight outings against the bigger boys -- men like Bob Pastor and Gus Dorazio, both of whom were past victims of Louis.

Conn's adherents also pointed out that Louis was no longer the murderous puncher of a few years before when he had destroyed Max Schmeling in 124 seconds. His last three opponents -- Buddy Baer, Tony Musto, and Abe Simon -- had gone an average of almost 10 rounds. Louis' age, 27, and his recent susceptibility to injury -- he was cut under the left eye in his most recent fight, which took place just three weeks before, against Baer -- gave further proof of his "slippage." Or so it was argued.

Conn's consummate boxing skill, with his flashy left hand serving as the centerpiece, made him a lineal descendant of Jim Corbett, the first of the great scientific boxers. Further, Conn could block his opponents' punches by "rolling" with them. It was argued that even when hit Conn had remarkable recuperative powers, having been knocked down only twice in his career, once by Oscar Rankins and once by Solly Krieger, and gotten up to finish both fights, beating Rankins in the process. Sweet William had always used his ring craftsmanship and speed to defuse his opponent's power, something his followers thought he could easily do against the slower-moving Louis.

If there was any rap against Conn, it was that he was headstrong, often trading punches when stung rather than moving away. Against the powerful Louis, this was seen as Conn's potential Achilles' Heel. However, he was determined not to let that happen in this, his big chance.

"I know I have lost my temper in some fights," the strong-willed Irish challenger said before the fight, "but you can't bet I won't this time." And bet his fans did, bringing the last-minute odds down to 11-5, Louis.

Many in the crowd of 54,487 who jammed into the Polo Grounds that Wednesday night, June 18, 1941, believed Conn could do it. Members of the press, including Hype Igoe and Willard Mullin, had gone out on a limb for Conn. So had several members of the boxing fraternity, including champions James J. Braddock, Fred Apostoli, Gus Lesnevich, Lew Jenkins, and Fritzie Zivic.

Of course Zivic could be excused for his favoritism; he was a "homer" rooting for a fellow Pittsburgher. But he was just one of more than 6,000 fight fans who had journeyed from the Steel City hoping that Conn could catch lightning in a bottle and do something that four previous light heavyweight champions had failed to do, win the heavyweight championship. 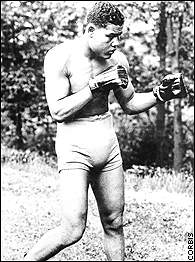 But most of those in attendance just wanted to see the much ballyhooed fight. One of those was Pete Herman, the former bantamweight champion. Now blind, Herman had come all the way from New Orleans to "see" the action. Herman, like the other 54, 486 fans in attendance, hoped the Louis-Conn to-do would match the excitement of the last title bout held at the Polo Grounds, the Jack Dempsey-Luis Firpo classic. Neither group, boxing's faithful nor Billy's fans, would be disappointed.

After two rounds both the Conn faithful and the boxing fans were wondering if Billy's build-up wasn't merely that, a build-up, as Louis pursued Conn across the ring, landing some heavy punches without more than a few token returns. From the opening bell, when Louis advanced immediately over to Conn's corner to "get at" the challenger, through the next six minutes of fighting, it was all Louis as he kept up a steady tattoo on Conn's body, staggering him with two rights in second, and controlling the action Conn made a great effort to evade the oncoming Louis and stay continually on the move. But that was all.

The third round was different. Although retreating, Conn was able to connect several times with his left, even stopping to hook his left into Louis' face and follow up with a left-right that forced Louis to hold on, something he hadn't had to do in his previous 17 defenses. Conn's sudden success gave heart to his adherents and credence to the rumor that Conn was a slow starter because of an unusually slow heartbeat which required a warm-up period.

Conn started Round 4 in characteristic retreat and then suddenly stopped and threw a straight left which connected with the oncoming right to the jaw, buckling Louis' knees. On the attack for the first time, Conn threw several short shots at Louis, most of which connected. Then Conn landed a hard left to the head and a right to the jaw. This was the Conn everyone had been promised. It also was the fight they had come to see.

Just as the momentum had swung to Conn, however, it swung back again to Louis. The champion hurt Bill with a left to the stomach, then, in close quarters, landed a vicious left hook to the jaw which staggered the challenger, who fell in against Louis. Louis followed up with a torrent of punches to the unprotected flanks of the challenger who, at the bell, staggered to the wrong corner.

Revived by smelling slats, Conn resumed his dancing in Round 6. But Louis, moving in on his target, dragging his back foot as if he were wiping it off a door mat, found his elusive target and pounded his body, buckling the challenge's knees with a vicious left hook to the pit of the stomach. Miraculously, Conn came back to score with a flurry to Louis' head, but Louis found Conn again to the body and head, opening a small cut over Billy's right eye.

Conn continued his dancing in Round 7, staying out of Louis' reach and even landing a few flurries of his own for good measure. Round 8 found Conn moving in for the first time since the fourth, jarring Louis with repeated one-twos, once when pinned against the ropes. The round ended with Conn swarming all over a suddenly bewildered Louis, rattling rights and lefts to the vulnerable head of the champion.

Brimming with confidence, the suddenly laughing challenger moved in on Louis, telling him as he pulled the champion into a clinch, "You've got a fight on your hands, Joe." And Joe knew it as Conn punctuated his remark by banging both hands to the head, following up with a left to Louis' face and a right that landed squarely on Louis' jaw, which hung open in amazement and pain. Shuffling forward, a newly-frustrated Louis resorted to pushing Conn into the ropes and throwing one right as the quicker challenger retaliated with a right and a left to the head and a right to the body. Suddenly the fight was all Conn.

Unable to land any effective blows to Conn's continually bobbing head, Louis followed Sam Langford's old adage to "kill the body and the head will follow," digging a left and right into Conn's stomach and then following with another left which he sunk into the pit of the challenger's midsection and a left to the head. All of a sudden the challenger was on the floor. But referee Eddie Joseph ruled it a slip, the second slip by Conn. And Louis, ever the sportsman, stepped back and allowed his momentarily defenseless foe to regain his footing.

Conn came back in the 11th, dashing out of difficulty whenever the steadily advancing champion forced him into the ropes. He also tied up Louis or held on whenever "The Brown Bomber" attempted to force the action. Then the handsome Irishman would launch his own attack to the head, forcing Louis to hold on to avoid Conn's seemingly endless stream of punches.

The 12th was a revelation as Conn danced less and punched more, connecting time and again with rights and lefts to the head of Louis. Then, toward the end of the round, Conn staggered Louis with a left hook to the jaw. The hunter had now become the hunted. Conn pursued Louis who was clinging on for dear life. The man who had Primo Carnera cowering, Max Baer frozen with fear, and Max Schmeling screaming in pain was in desperate trouble for the first time since his loss to Schmeling five years earlier. At the bell the crowd was on its collective feet, cheering frantically, assured now that they were witnessing the sequel to Dempsey-Firpo.

With the reviving smell of ammonia stinging his nostrils and the ringing words of his trainer, Jack Blackburn -- that Louis "had to knock him out to win" -- stinging his ears, Louis came out of his corner for the thirteenth hell-bent upon finding his quarry and bringing him to bay. Conn greeted the now purposeful champion with a right and a left to get his attention, the right cutting Louis' ear. As Conn waded in with a left to the stomach followed by a right that missed Louis' chin, the champion landed a hard right of his own. It caught Conn flush on the jaw, snapping his head violently back. Louis followed with three more hard rights to the chin, but, untrue to his preflight statement that he would run away to stay another day, Conn fought back, out slugging the champion at close quarters in a savage exchange. A right uppercut by Louis staggered Conn. Louis, now sensing the moment he had been waiting for the past 38 minutes, landed a volley of rights and lefts to Conn's head. Another right to the head spun Conn part way around and he fell as if he were filmed in slow motion. Referee Eddie Joseph picked up the count over the inert form that had almost been the heavyweight champion of the world.

Conn tried to regain his feet, leaving his haunches at the count of 10, but it was a split second too late. Referee Joseph signaled "the end" at 2:58 of the 13th.

The fight itself was memorable. It was magic, and it was one of the greatest ever seen in this or any other era. Joe Louis, the man who had been just six minutes and two seconds away from losing his crown to the man he called "the slickest" he had ever faced, had come back to reclaim and retain his title. And lay claim to his legacy as the greatest heavyweight of all time.

As he left the ring Louis spied his manager, Julian Roxbury, smoking a cigar. "How many of those you swallow tonight?" asked "The Brown Bomber." He needn't have bothered. Everyone who had seen the fight, Roxbury included, had swallowed. And swallowed hard.

From "The Great Fights, A Pictorial History of Boxing's Greatest Bouts,"
By Bert Randolph Sugar.