Around 10 o'clock Friday night, A.J. Hawk will do what he does on the eve of every game. He'll pick up the phone and call his parents.

But before you cue the Waltons music and get all sappy about the family bonding, consider the ritual subject matter between the Ohio State linebacker and his mom, Judy. She's not just there to say nighty-night.

"She's straight-up mean," A.J. says, laughing. "She's not a mean person, but she tells me what she wants me to do to the other team. She's crazy."

Judy's general instructions: Hit 'em all. Hit 'em hard. Violently hard if need be. And be sure to get in a shot on the quarterback. 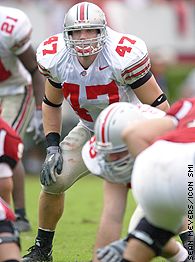 "She wants him to go out there and kill everybody," A.J.'s brother Ryan says.

Maybe this is how you raise an All-American linebacker. Maybe it takes a dedicated kid with the athletic ability of a basketball player and a mom with a Butkus streak. Throw in a nightly feeding of raw meat, then get out of the way.

Whatever the family formula was, the bottom line is this: The Hawks of Centerville, Ohio, have produced another in a seemingly endless line of slobber-knocking Ohio State linebackers. After Randy Gradishar, Tom Cousineau, Pepper Johnson, Chris Spielman and Steve Tovar, A.J. Hawk's got next.

And Hawk will be the leader of an elite linebacking corps charged with a monumental task Saturday night in The Horseshoe: keeping Texas quarterback Vince Young from getting his long legs limbered up and running for big yardage. Young's scrambling ability figures to be the biggest element of the biggest intersectional game in years.

Win this one, and Ohio State gets a great jump-start toward its second national title in Hawk's four years.

"We got a little taste of it our freshman year," he said. "Now we want another one. [Bookend national titles] would be the dream scenario. If you could write the story, that's how it would come out."

The A.J. Hawk Story is a pretty good one in its own right.

Chapter One: Myth And Legend
A reporter at the Big Ten media days in Chicago last month took one look at Hawk's broad, scarred nose and asked, "Did anyone ever tell you that you look like a linebacker?"

Hawk does look the part, but partly by accident. The scar on the bridge of his nose is not a Ray Nitschke Special; it's a chicken pox scar from his first year of life.

The season-long bruising of the nose is legitimate, at least. From the first day of contact through Ohio State's bowl game, his schnozz will be a bit swollen and discolored. That's the result of wearing his helmet loose (he prefers not to inflate the interior cushions) and having it slam down on his face upon contact.

This is not Judy Hawk's favorite part of football.

"She tells me to put air in my helmet every day," Hawk says.

The other part of the Hawk visage that hints at a wild-man persona is the hair. A guy with a former military cut, he's now let his blond mane flow down his neck and onto his upper back.

But when ESPN analyst and fellow Centerville product Kirk Herbstreit chided him recently about the rock-and-roll hair, Hawk's response was, according to his dad Keith: "Kirk, shut up. It's my Pat Tillman tribute."

Tillman, of course, was the football hero turned military hero who walked away from NFL millions to serve with special ops in Afghanistan. About the time Tillman was killed, Hawk started growing his hair long, the way Tillman wore it during his playing days.

"When Tillman went into the military, he said, 'That's what I want to do.'  I think that's kind of out of his mind right now, but for a while he was more interested in the military than pro football."

Chapter Two: Football Family
Keith and Judy had three boys -- Matt, Ryan and A.J. -- who have spent their entire lives competing with each other.

"We toughened him up at a really young age," Ryan says of the baby, A.J.

Their parents have basically spent the last 22 years watching them play one sport or another. Baseball, basketball, swimming -- and, of course, football.

"Football has been very good to my family," Keith Hawk says. "Every Saturday to me is like Christmas morning. You don't know what you're going to get, but you're really excited."

Matt's career ended at Centerville High, but Ryan went on to play quarterback in college -- first at Miami (Ohio), where his path up the depth chart was blocked by a guy named Roethlisberger. So he transferred to Ohio U. and was the starting quarterback for two years before graduating last June.

By then, A.J. had matriculated to Ohio State. In junior high, he'd dreamed of earning a basketball scholarship to Duke -- until he grew too thick for the point guard position. Then he started concentrating on football, first as a running back and then as a linebacker.

Hawk was considered a decent recruit, but nobody's must-have All-American. He thought he was headed to Miami to join his brother when Penn State offered a scholarship in the summer before his senior year, and then Ohio State followed with an offer shortly thereafter.

"He was delighted when Penn State offered him," Keith says, "but once Ohio State offered, he knew that's where he wanted to go."

That left Keith and Judy with a difficult choice: Who's team to go watch, Ryan's Bobcats or A.J.'s Buckeyes? The decision was to split up.

"It was a lot, lot worse seeing Ryan get hit," Judy says.

How about that? The mom who urges her linebacker son every week to smack the quarterback couldn't bear to watch the same thing being done to the QB in the family. An understandable double standard.

With Ryan's college career over, husband and wife are finally back together in the same stadium -- just not sitting together. They'll put Matt and Ryan between them, partly for superstition's sake and partly because, in Judy's words, "I ask too many questions."

She'll be in the Shoe Saturday night, questions at the ready.

Chapter Three: Living the Dream
More than 100,000 Buckeyes fans will cheer at the very sight of No. 47 on the field Saturday, a thought that still strikes him as amazing at times.

"When I was young, if you had told me I'd get a scholarship to Ohio State, I'd never have believed it," says the kid who grew up watching Andy Katzenmoyer's every move at linebacker for the Buckeyes.

He's in his fourth year rooming with center Nick Mangold, an old youth-league teammate. He's completing work toward a criminology degree. Brother Ryan is back in Centerville, which means he's close enough to visit on occasion and play Texas hold'em, as he did one night this week. Dad was in Columbus on business Thursday and took A.J. to dinner.

No wonder he hardly considered turning pro last year. Who would want to leave all this?

"I can't remember anybody who's ever felt like they were more in the right place than A.J. right now," Keith Hawk says. "He knows he's in exactly the right place."

His family will be in its place Saturday to watch the baby of the family do his thing. But first, on Friday night, A.J. Hawk will get his marching orders from his mom: Seek and destroy.