This is looking like an excellent time for Fisher DeBerry to retire.

He's had a great run at the Air Force Academy -- arguably the greatest run for a service academy coach in the last 50 years, since Red Blaik at Army -- but his remarkable legacy is sinking fast. Why lose it in the quicksand of unwise racial remarks, combative Christianity and too many losses? Why not call it a career at the end of this, his 22nd year as head coach, and ride off into the Rocky Mountain sunset? 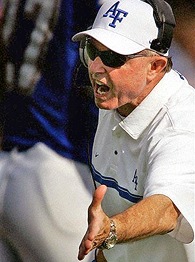 He deserves a hero's sendoff. He doesn't deserve to end his career being beaten on the field and beaten up in the court of public opinion. But that's the direction the 67-year-old DeBerry is headed, after his second plunge into controversy in less than a year.

Last year the outspokenly religious coach hung a banner in the Air Force locker room that read, "I am a Christian first and last.  I am a member of Team Jesus Christ." It might have been appropriate at Liberty University -- maybe. It was not appropriate at a taxpayer-funded government institution that presumably counts Jews, Muslims, agnostics, atheists and others among its student (and student-athlete) population.

And the banner unveiling was rather poor timing, given that the academy was embroiled in lawsuits alleging religious intolerance and an oppressively Christian atmosphere at the time. The banner was removed two days later.

Then, after losing to TCU Saturday to drop to 3-5, DeBerry explained that the Horned Frogs' defensive success is attributable to the fact that it starts 11 African-Americans.

" Afro-American kids can run very, very well," DeBerry said. "That doesn't mean that Caucasian kids and other descents can't run, but it's very obvious to me they run extremely well."

Again, not ideal timing. On Monday, the academy welcomed a new superintendent, Lt. Gen. John Regni, who pledged a zero-tolerance policy toward discrimination. On Tuesday, DeBerry piped up about TCU's African-American players, stopping just short of saying, "We need us some more of those black fellers."

I'm not saying that Fisher DeBerry discriminates. I went to high school on the base of the Air Force Academy, and I graduated a few years ahead of Fisher's son, Joe (who was a fine baseball player). I don't know anyone in my hometown of Colorado Springs, Colo., who doesn't think highly of DeBerry.

So it's not like DeBerry was inventing something here -- or even saying something many coaches don't talk about in private. But given the decades of wrongly stereotyping black athletes as physically superior and mentally inferior -- run fast, think slow -- the coach was walking into a minefield. He was creeping toward Jimmy "The Greek" territory -- and every coach knows that you don't go there. Certainly not without great care.

I'm all for a more open dialog about race in America, and especially in sports. But sweeping generalizations about fast black players are going to get a coach in trouble.

Combine DeBerry's two tone-deaf episodes and you have the unsettling feel of a coach who is losing his way. Combine that feel with the on-field results -- Air Force has lost 14 of its last 22 games and could have its first back-to-back losing seasons since 1980-81 -- and you have concerns about the state of the program.

For two decades, few coaches in college football have done better than Fisher DeBerry. In a no-win situation, he won routinely.

DeBerry's career record is 164-99-1. He's had just three losing seasons in 21 years -- the third-longest tenure in the game, behind only Joe Paterno and Bobby Bowden. He's won at least eight games in 11 different seasons. He's dominated the Commander In Chief competition against Army and Navy. His option offense has been perfectly tailored to the Falcons' strengths -- discipline and intelligent decision making -- and compensates for their physical shortcomings.

But that option offense is looking a bit worn and dated these days, and so is the man who coaches it. His contract runs through 2009, but it's time for Fisher DeBerry to concoct an exit strategy that preserves his dignity and serves the Air Force Academy as well. He should retire this year and accept the applause he deserves, before his legacy sinks any further.