BLACKSBURG, Va. -- The match made in BCS heaven -- Bevo vs. Tommy Trojan -- has not been overthrown yet. If Virginia Tech is going to force a reconsideration of the Rose Bowl matchup widely seen as inevitable, it isn't going to happen overnight.

At least not over this night. 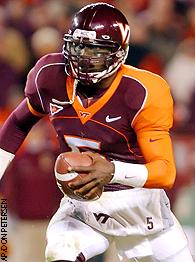 Beating Boston College 30-10 was a good victory. A no-doubt-about-it quality win. When your program has lost as a solid home favorite at least once in each of the last four years, you don't overlook the importance of whipping the nation's No. 13 team by 20.

And if you hold said team to 183 total yards, pile up 16 more first downs and 309 more yards? Mission accomplished. You've done enough to hold your place at No. 3 in the BCS Standings.

Problem is, third place qualifies the Hokies for more anxiety than glory. Repeatedly stalling in the red zone Thursday night kept the score closer than the stat sheet says it should have been. And the decision makers out there are watching the scores closely.

Thus the big job -- the job of forcing the pollsters and computers to love the Hokies more than either USC or Texas -- is not done yet. If they're going to make it happen, it's going to take one of two things:

• A stunning loss by the Trojans or Longhorns.

• A five-week, season-ending body of work that creates doubt and demands debate.

The opportunity is there, because the competition down the stretch is demonstrably better than Texas'. But this start on a season-ending rush must be followed with more.

Tech now needs a take-notice victory Nov. 5 here against Miami, and then a similar flexing of the muscles in the ACC title game -- preferably against Florida State for power-rating reasons.

Of course, Frank Beamer wasn't going to turn his nose up at this win.

"I think we played well against a really good football team," he said.

And when asked whether he felt compelled to put more points on the board, the answer was no.

Problem is, it's the only BCS we've got, Frank.

Nevertheless, you will not hear a lot of no-respect carping out of the Hokie locker room -- which is saying something since modern athletic teams love few things more than crying about a lack of respect.

Asked his thoughts on the BCS standings and Tech's third-wheel place in them, running back Mike Imoh said very evenly, "None at all."

Asked about a lack of attention compared to the 'Horns and Trojans, Imoh said, "We get some pretty good attention. We get these Thursday night games."

Imoh finally gave up a little bit, saying, "Week by week, we'll try to keep winning games and open some eyes up."

Not exactly a declaration of war -- on the system, or on the two teams ahead of the Hokies. Maybe if the BCS Standings are the same by Thanksgiving, the tenor will change.

But consistent with the lack of postgame posturing was Tech's lack of in-game panic when BC scored and took a 7-6 second-quarter lead. If you're not treating this game with plant-the-flag-on-Iwo-Jima urgency, you don't sweat an early one-point deficit.

Even if it's the first time you've trailed in a game since Labor Day weekend.

"That's what's special about this team," Imoh said. "When they scored the touchdown, no one went crazy. No one went nuts."

In fact, on the sideline, quarterback Marcus Vick had a simple message for his teammates: "We're going to be OK."

Then he went out and proved it, leading the Hokies on an 11-play, 65-yard retaliatory drive for the go-ahead touchdown. Tech followed by forcing a BC three-and-out, and then the Hokies went 69 yards in 11 plays for a 20-7 lead and complete control of the game.

With big brother Michael watching from the sidelines in an orange stocking cap and a maroon jacket, Marcus converted four first downs on that drive, two with his arm and two with his feet. The scoring play was a crisp roll to his right and a wrist flick to Josh Morgan for a three-yard touchdown -- the kind of play that illustrates Marcus' pinpoint accuracy throwing the ball.

His mechanics might not be straight out of the Peyton Manning Training Video, but it doesn't seem to matter with Vick. He was 22 of 28 Thursday night, and he came into the game completing 67 percent of his passes.

But that isn't the best stat associated with Marcus Vick. The best stat is this: 8-0. That's his record as a college starter.

Combine that with his sibling's body of work in Blacksburg and the Brothers Vick are a cool 28-1 as college starters. Peyton and Eli, by comparison, were a combined 63-19 -- a great record, but nowhere near the Vicks'.

Michael ran his first-year starting mark to 11-0 before losing in the BCS title game to Florida State. Marcus would love to get there in the same shape -- but Tech has some serious work left to bump off Bevo or Tommy Trojan.