STATE COLLEGE, Pa. -- For those speculating that this remarkable vindication season offers a perfect opportunity for Joe Paterno to go out in a blaze of glory, we have this retirement update from Deliriously Happy Valley: 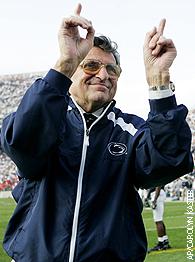 Why stop there? Paterno would be 98 then. Why not go two more years, go for triple digits?

Yo, Joe, why not coach forever?

After walloping Wisconsin 35-14 on a blissful Indian Summer evening in the Pennsylvania hills, the old man looks eternal. Looks like he's had a football facelift, an injection of coaching botox. Urban Meyer wishes he cut as dashing a sideline figure as JoePa right now.

Paterno presided over a satisfying senior day Saturday, feeling the love rain down from 109,865 fans. In direct defiance of virtually every preseason prediction, his program is back where it once held residence.

"This is what Penn State football is all about," said Paul Posluszny, a classic hard-edged Nittany Lion linebacker. "Coming to Penn State, you don't think you're going to lose. This season right here, this is why kids come to Penn State."

The regular season ends Nov. 19 at Michigan State, with a chance to win the program's first Big Ten title since 1994. Along with it would come Penn State's first BCS bid. And judging from some of the wild results this Saturday, hey, it's too early to completely rule out the Rose Bowl.

Thus the 364-day revival of a seemingly passé program has terminated the retirement movement that swarmed around Paterno. He's back to going out on his terms -- as if there were ever a question about that -- and if you believe his son, his terms could be long term.

"I would think I'll retire before Joe does," said Jay, calling his dad "sucker" and "Joe" in consecutive breaths. "I think he's signed on to coach my kids."

A year ago Sunday, there were few Penn State fans who still wanted Paterno to coach the kids he had on scholarship right then, much less the next generation. The Nittany Lions had just lost to Northwestern to drop to 2-7, 0-6 in Big Ten play.

You had to view the world through rose-colored glasses to envision a rapid reversal of the program's downward spiral. Fortunately, the Paterno family had a pair of them. Coke-bottle-thick, of course.

After a series of agonizingly close defeats, and in the midst of a fourth losing season in five years, the quarterbacks coach was telling whoever would listen, "If we win one game, we might not lose until 2006."

"Everyone thought I was out of my mind," Jay Paterno said. "It was just a matter of getting confidence. Confidence changes everything."

Confidence arrived at the end of a scantly attended battle for the Big Ten basement in Bloomington, Ind. Penn State stuffed four Indiana running plays from the 1-yard line in the closing minutes for a 22-18 win, and it changed everything.

The Nittany Lions are 11-1 since that day, losing only on the last play at Michigan three weeks ago. Starting with a goal-line stand that seemed to augur nothing, a downward spiral has been stunningly and resoundingly reversed.

Jay said that Joe told the team, "I'm not talking about winning six or seven games. I want to win 'em all."

As Joe told the media Saturday: "I probably had more confidence that we were close than any of you guys did. Probably more than any of the administration."

Reasons why: Penn State was returning most of a stellar defense. It was adding play-making talent at the skill positions in freshmen Derrick Williams, Justin King and Deon Butler. And it was going to move Michael Robinson back to quarterback once and for all.

Robinson's vagabond career took him to running back, receiver, punt returner -- but rarely to the position he was recruited to play, and the position he longed to play. At one low point Robinson was ready to transfer, and arrayed a list of business cards from coaches at other schools in front of him.

"I was getting ready to make some calls," Robinson said. "Somebody asked, 'Do you really want to do that?' I could tell I really didn't want to do it. I didn't make any calls.

"Every time I'd wake up, the sky was still white and blue."

Apparently taking that as a divine sign, Robinson stuck it out. Saturday came the reward: on senior day, he set the school single-season total offense record with 2,687 yards -- and still has a game to go.

He can be an erratic and occasionally inartistic passer, but Robinson is an explosive runner and a fierce competitor. He's more than proven his worth this season.

That's why Jay Paterno grabbed Joseph Buggs, a friend of Robinson's and a high-school coach from his home state of Virginia, on the way off the field Saturday.

"All those people who doubted No. 12 can kiss my ass," Jay said into Buggs' ear.

"A lot of people had some doubts about whether he was a big-time quarterback," Joe Paterno said. "To see him play like he has, you've got to feel good about it."

"That's the stuff that really ticks me off most," Jay Paterno said of the criticism of his father. "I knew Joe could do it.  It's a family thing. You know how Italians are, they've got each other's backs.

And at this unlikely point, it's once again Joe Paterno's world. The rest of us are just living in it -- and hoping we have a year like this ourselves when we're 78.