ATHENS, Ga. -- It took 11 hours to play out, this epic Saturday in the Southeastern Conference. If you hung in there from half past noon to half short of midnight, it was worth every drama-drenched minute.

Finally -- after the Head Ball Coach stuck it to his old school in Columbia, after the 91-point pinball match in Nashville, after the Tide's national title hopes died in overtime in Tuscaloosa -- it came down to this hysteria between the hedges. 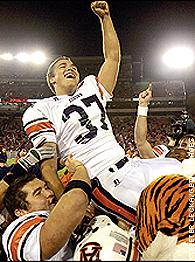 Nothing special here: just nine lead changes (four of them in the fourth quarter); 952 yards of total offense, against a pair of pretty stout defenses; a 62-yard do-or-die fourth-down play (Cox to Aromashodu, channeling Leinart to Jarrett vs. Notre Dame); a partridge in a pear tree; and last-second redemption for the saddest kicker in the SEC.

The climax of this Southern-fried football feast was Auburn 31, Georgia 30. It was the 109th meeting between the two. Precious few of the 108 preceding could have been better.

"Nobody," said Auburn coach Tommy Tuberville, "had any give-up."

The suspense was so sustained here Saturday night that the day's huge stakes -- divisional titles were very much in the balance in both the SEC East and West -- virtually disappeared in the heat of competition. By the end, there was no time for scoreboard watching to see who won the Alabama-LSU and South Carolina-Florida games. By the end, this game became a can-you-top-this battle that took on a life of its own.

"Usually you can look up for a minute and catch the ticker, see the scores [on the scoreboard]," Auburn linebacker Karibi Dede said, "but this game was so tight and so intense, I forgot the other games were even going on. I just asked who won."

For the record, the winners of import were LSU, South Carolina and Auburn, which means that spots in the SEC title game are not yet decided. Odds are stacked heavily in favor of LSU and Georgia, but they've still got some work to do.

But that's only fitting. In an SEC season that saw Vanderbilt open with a four-game winning streak, is closing with South Carolina on its first-ever five-game streak, and included the collapse of preseason favorite Tennessee, nothing is going to go as planned.

That includes Auburn's strange season arc. Rarely has an 8-2 SEC team been the subject of less hoopla.

The Tigers rolled into 2005 off a 13-0 season, then proceeded to flop at home in a prime-time opener against Georgia Tech. Next time they rose up on the national radar, they lost 20-17 to LSU -- again in prime time, again on national TV.

America tuned out. Heck, so did a decent-sized chunk of the state of Alabama, where the Crimson Tide were riding defense to 9-0. Lacking a true take-notice victory, Auburn was relegated to In Other News status.

That prompted offensive tackle Marcus McNeil to stand up at the Auburn team meeting Thursday night and call his teammates out.

"He looked us all in the face and said we hadn't won a big one yet," Dede recounted.

Third try, it turns out, is the charm. But it required a charmed escape in the final minutes.

D.J. Shockley, back from the knee injury that caused him to miss -- and his team to lose -- the Florida game, ravaged Auburn's defense. He rolled up 344 yards of total offense and led Georgia to 30 points -- but he couldn't quite close the deal.

Partly because coach Mark Richt wouldn't let him. For the second consecutive game -- both losses -- Richt got conservative in the fourth quarter and played for field goals instead of going after touchdowns. The result was a 41-yard Brandon Coutu field goal with 3:25 left that gave Georgia a 30-28 lead.

But for three plays, the strategy looked like it would work. Auburn was down to its last chance. Facing fourth-and-10 from its own 35, with 92,746 fans losing their minds, the Tigers found a little magic.

Brandon Cox dropped and saw Devin Aromashodu running a post pattern into a gaping hole in the middle of the Georgia defense.

"They were playing zone, which the play is designed for," Cox said. "The safety got all passive and Devin ran right by him. It was so open, I thought there had to be somebody back there somewhere."

Nobody close enough for the Bulldogs' sake. Cox fired, Aromashodu caught. He zigged right, sliding through the flailing arms of safety Tra Battle and accelerating the sidelines. With shrieks of horror building, Aromashodu appeared to be home free with the stunning winning touchdown.

Not so fast. Cornerback Paul Oliver, sprinting up from behind, punched the ball out of the Auburn wideout's right arm at the 3-yard line. The ball bounced into the end zone, where fellow Auburn receiver Courtney Taylor covered it.

But an offensive player cannot advance a fourth-down fumble unless it's recovered by the fumbling player, so the ball was spotted back at the 3. (Nevertheless, Taylor's play was critical. Had Georgia recovered or the ball rolled through the end zone, it would have been a touchback and the 'Dawgs' ball.)

The play also was a huge break for Auburn, allowing it to run the clock down from 1:50 to 8 seconds before sending in Vaughn to change his lousy luck.

Vaughn's right foot had misguided five field goals three weeks ago in a three-point loss at LSU, all of them from more than 40 yards out. After that heartbreaker in Baton Rouge, the first words from his dad were, "Hit a game-winner against Georgia or Alabama and you won't even remember this."

Here was that pep-talk prophecy come to life. And this time, fate and the Auburn offense were kinder to the kicker, setting him up with a 20-yard chippie.

"Of course, things flash through your head, thinking back to the LSU game," Tuberville admitted. "But there's no way he was going to miss that one."

Vaughn didn't have that flashback. Wouldn't allow it. His thought process coming in:

"Be on a mission. Be aggressive, aim for the heart and drill it as far down the middle as you possibly can."

He drilled it deep into Georgia's gut, as Auburn became just the second team to score more than 30 points on a Richt-coached Bulldogs team. Then Vaughn turned and threw his right fist into the air, releasing three weeks of pent-up feelings.

"I don't even know [what I was thinking], really," Vaughn said. "I was kind of like, 'What did I just do?' It was probably the happiest feeling I've ever had."

It touched off a raucous postgame celebration for the blue-and-orange minority in beautiful Sanford Stadium. The Auburn players ran to their fans to celebrate, then strutted off the field woofing.

Disrespect came flying down out of the stands as the Tigers walked past the Georgia band. A plastic Diet Coke bottle, about one-third full, somersaulted past Auburn punter Kody Bliss' head. He picked it up, unscrewed the cap, took a swig and threw it back, cap off, Diet Coke splashing out.

The Bulldogs band and dance squad booed. The Auburn players smiled and held their hands to their ears. Down here in the South, where they care more than anywhere else, the emotions were raw and exposed.

Thus it was a slack-jawed exiting crowd of Georgia fans, who saw their hopes for a BCS bowl take a hard hit. At least the Bulldogs no longer have the Gators hot on their heels for the East crown, thanks to South Carolina's upset of Florida. Georgia needs only to beat Kentucky here Saturday to advance to its third SEC title game in the past four years.

That prompted one angry fan to find a silver lining. On the way out of the stadium he shouted five words never, ever before heard between the hedges:

"I love you Steve Spurrier!"