EAST LANSING, Mich. -- A Gatorade bath was out of the question. You don't test a 78-year-old man's mortality with a shock like that on a chilly November night.

A ride on the players' shoulders would be appropriate. Or a series of hugs from the team. How about a prolonged love-in with the roaring blue-and-white fans in the corner of Spartan Stadium? 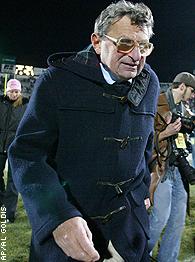 None of the above. By the time the Penn State Nittany Lions got around to celebrating with their coaching icon, Joe Paterno was gone.

"I guess he bounced," defensive end Tamba Hali said, using a term that would no doubt draw a blank look from the beloved, bespectacled bouncer himself.

After Penn State's Big Ten-winning, BCS bowl-clinching, 31-22 victory over Michigan State was in the books, Paterno's postgame featured no wasted motion or emotion. The feel-good story of 2005 was not going to get any added sap from the man who created it.

He waved to the Penn State fans and disappeared into the tunnel under the north stands, leaving the hoopla behind. The living legend walked unnoticed and uncelebrated amid downcast Michigan State players. He nearly turned into the wrong locker room. Pointed in the right direction, he walked, with shoulders stooped and britches high, up the steps into the visitors' den.

For a brief moment he was by himself. JoePa did not take this opportunity to pump a fist, let out a whoop or moon walk. He pulled out a handkerchief and wiped his nose, then shucked his overcoat. Longtime director of football operations Tom Venturino came in, patted Paterno on the back, and that was it.

The saying in football is that when you score a touchdown, act like you've been to the end zone before. Same with the winning locker room, it turns out.

"You know, I've had a lot of good football teams," he said, explaining his matter-of-fact postgame mood. "The kids are the ones that are fired up. They're the ones who went through those losing seasons and everyone doubting them."

That's some false modesty. JoePa went through those losing seasons and endured that doubt right alongside his Nittany Lions.

Before this season, Penn State was a universal mid-pack pick in the Big Ten -- which means the media expected improvement over the two dreadful preceding years, in which the Lions won a total of three league games. And the entire world outside the Paterno household thought the old man was washed up and in denial about it. Nobody could make him retire, but everybody wanted him to.

Now look at him. Last time a septuagenarian had a year this good, Ronald Reagan was winning re-election over Walter Mondale in a landslide.

"He never lost his team," Big Ten commissioner Jim Delany said. "Forget about holding them together for one year. He held it in for three-four years. That is the incredible part of this story."

There was one last incredible part leading up to this game. The guy who held his team together chose this past week to tear them up. On Tuesday, with their first conference title since 1994 and a major bowl bid on the line, Paterno threw the entire team out of practice. 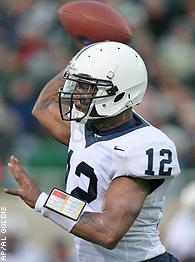 Tuesday is the longest and toughest prep day every week. In the estimation of stellar senior quarterback Michael Robinson, the offensive players "were stinking the place up. It was one of those days where the wideouts couldn't catch a thing."

The breaking point came about 40 minutes into practice, when freshman Justin King dropped an easy pass.

The quarterback said Paterno generally tosses his team once or twice a year. This was the first time this year.

Paterno got his message across, and Robinson made sure it stuck. Before the guys even took off their pads, the leader's leader called a meeting of the offense in that unit's squad room.

"I basically challenged 'em," Robinson said. "I said, 'What type of offense are we? Stop making mistakes, or the previous nine [wins] are for nothing.' "

With the Big Ten title on the line Saturday, Penn State played like you'd expect a Paterno team to play. It played a tough, sound game -- not overwhelming by any stretch -- and let the other guys make the mistakes.

Michigan State outgained Penn State by 108 yards on the day, had seven more first downs and held the ball 7 minutes and 20 seconds longer. And the Spartans never led.

That's because of a series of breakdowns that were agonizingly familiar for Michigan State fans. They watched their quarterback throw four interceptions (three to superb cornerback Alan Zemaitis), including two that stopped scoring drives and one that gift-wrapped a Penn State touchdown. They watched serial special teams ineptitude, featuring a blocked punt for a TD, a missed field goal and a botched hold on another field goal. And there were the usual penalties -- seven of them for 55 yards, almost all at highly inopportune times.

"We could not afford to have made the mistakes we made," Spartans coach Smith said.

Penn State, by contrast, went nearly 58 minutes before turning the ball over. Robinson coughed up a fumble at the 2:08 mark and it led to a late State touchdown, but by then the Lions had this game under control. Their redemptive season had climaxed.

"We were picked to finish sixth in the Big Ten and at the Big Ten [media days] people laughed when coach Paterno went up to talk. All the people were talking about Michigan and Ohio State, nobody even wanted to ask us questions. So there is definitely a sense of redemption."

The redemption starts at the top, with JoePa. You won't get him to crow about it, but you know he feels it. Beneath that blasé exterior, the old man was bouncing on the inside.