HATTIESBURG, Miss. -- Less than a minute remained in the Season From Hell.

A metaphorically apt rain splattered on the Tulane Green Wave. Another loss was locked up, this one against Southern Mississippi, 26-7. The Wave and the Golden Eagles were playing out the final snaps of a game that was supposed to be played Sept. 4, until everything changed on the Gulf Coast.

The year was all over but the shoutin'.

The shoutin' came from the Tulane sideline.

From a small, stubbornly optimistic voice. A voice in support of a team that refused to surrender.

Her pixie haircut was plastered to her head. She wore a wet green pea coat over her cheerleader uniform. Nobody required her to be present for the final Tulane football game of the year -- and maybe ever -- but here she was. Cheering 'til the last dog dies.

Healan is enrolled at the University of Georgia now, since Hurricane Katrina submerged the fall semester at Tulane. She drove from Athens on Friday night with her mom and stayed "in a skuzzy motel" near the Alabama-Mississippi border, and she was in place on the sideline Saturday afternoon to cheer for America's gridiron vagabonds one last time.

"We wanted to come out here," Healan said, "and show that Tulane is not done."

That, basically, was the football program's mission during this season of unprecedented challenges. To show that Tulane was not done. To carry the name of a crippled university from a shattered city as far and as long as it could.

It was sometimes miserable, like when the team returned from one road game to its home-away-from-home in Ruston, La., at 6 the next morning. It was sometimes comical, like when Tulane was borrowing cleats from Marshall, or when athletic director Rick Dickson was personally running to a sporting goods store to pick up hoodies for the tennis team. It was never normal.

Just getting here with dignity and roster intact -- "We didn't lose a player, a coach, a manager or a wife," coach Chris Scelfo said with a laugh -- was a significant display of resilience.

"If we can get through what we did, then maybe Tulane University and the city of New Orleans and the Gulf Coast can look at us and say, 'Hey, we can pull up our boot straps and get through it,' " Scelfo said.

"Strive and persevere -- that's your pride at stake," said linebacker Brandon Spincer. "Our pride is what got us through this."

A distressingly large segment of America seems to have emotionally checked out on New Orleans and the Gulf Coast, moving on because the Katrina-created disaster had outlived its relevance in the national news cycle. But the problems haven't gone away. And, on a smaller scale, Tulane football hasn't gone away, despite the adversities and absurdities it has encountered.

"Quite likely, if we had just sent our kids home [before the hurricane], I don't know if we could have continued," Dickson said. "We might've sealed our fate right there. Instead we showed that we're here, we're together, let's see this thing through.

"Every Tulaner out there, whether they're sports people or not, knew we were out there."

That was the most important thing in this lost season. Simply enduring. Wherever the games were played, the Green Wave kept showing up to carry the message of president Scott Cowen: Carry the torch, be the face, represent the name.

"There's people fighting a lot bigger battles than we have this year," Scelfo said. "But as I've said, I wouldn't wish this on my worst enemy. We made the best of a bad situation. I'm really proud of the guys for competing the way they did."

Tulane is 2-9, having lost its last eight. That's a crashing disappointment given the preseason expectations. Scelfo said he believed this was his best team in seven years as head coach at the school, better than the 8-5 team that won the Hawaii Bowl in 2002.

But expectations were officially drowned in the last days of August and first days of September, when Katrina chased Tulane out of New Orleans and never let it come back. When your travel itinerary suddenly includes stops in (take a deep breath) Jackson, Miss.; Dallas (twice); Ruston, La.; Shreveport, La.; Baton Rouge; Lafayette, La.; Orlando; Mobile, Ala.; Annapolis, Md.; Houston; Monroe, La.; and Hattiesburg  you've got zero chance of maintaining the continuity that football teams thrive upon.

"I would imagine 10 years from now we'll look back and say, 'What if?' " defensive end Michael Purcell said. "We know this season could have been a lot better. But we also got life lessons that can last forever. I can handle anything life throws at me now."

There were a few final indignities Saturday. Southern Miss' coaches and support staff all wore rain slickers on the sideline. Tulane's did not. They had no rain gear -- never figured they'd need to grab it when they left New Orleans the day before Katrina hit.

Who knew they wouldn't be back again?

The closest Tulane came to home was spending the night on air mattresses and in sleeping bags in the banquet room at English Turn Golf Course in September. Some of the players and coaches had slipped back home for a day or two here and there to see what was left of their homes -- four coaches lost everything -- but most have not spent any meaningful time in New Orleans since August.

They'll get their chance soon enough.

Saturday night the Green Wave made the long drive back to Ruston, for the last time. Classes they were taking at Louisiana Tech are over for the quarter. Sunday, the players will be released to their families -- and, if they choose, to return to New Orleans.

One school staffer who has been back in town for a while was worried what that would bring.

"I think most people expect that everything will be OK when they get back," he said. "The campus is a long way from everything being OK."

That includes the football program.

It's never been a robustly healthy entity. Two years ago there were serious discussions in the university hierarchy about dropping the sport -- and that was before a disaster had closed the campus and the Green Wave's stadium. This is a program with an all-time losing record and a history of scant attendance in the cavernous Superdome.

As a university, Tulane will be faced with a series of brutally hard financial decisions when it reopens in January. Part of that will be determining the fate of its most expensive sport.

"In my heart, I believe we'll compete," Dickson said. "I really do. I think there will be changes, but I don't know what they'll be. Our board of trustees, they're having to look at everything from the hospital to the med school to the colleges, program by program. Athletics will be part of that. Given what's happened, how should athletics fit into it, and what should it look like?"

Dickson is hoping for some sort of answer before the start of the January semester, in large part to assuage the concerns of the Tulane athletes. Many of them will undoubtedly be waiting for a signal that tells them their sport (and their scholarship) will still be there in 2006. 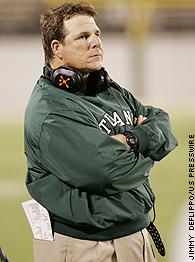 Without that signal, mass transfers are a possibility. Especially with poachers already skulking around the Tulane progam.

Davis sent Scelfo a letter detailing his conversations with Orgeron and Ole Miss assistant Shawn Slocum. The Tulane administration notified its counterparts at Mississippi about the call, and also notified the Conference USA office, which discussed the matter with the Southeastern Conference.

With incidents like that in mind, Dickson wanted to address that issue with the football team after the Southern Miss game.

"I want to tell the players that, if things don't work out, we'll be the people right at the front of the line to guide them to the right place," Dickson said. "But at the same time, don't let anybody else get in that line.

"I'm worried about these kids letting go. That would be the worst damage that could happen, and that would be self-inflicted."

Another vital component to continuing football will be a place to play. A recent analysis of the Superdome was more optimistic than had originally been expected, with an estimate that it could be ready to host games in November 2006. To that end, Dickson said he's already been in contact with the Conference USA office about scheduling the school's four league home games for the end of next year.

But that's the future. Saturday was about finding a small slice of closure on this awful autumn odyssey across the South.

Asked for the high point to the season, Scelfo unexpectedly said Saturday was it. Making Southern Miss work for its sixth victory and likely bowl bid was a victory in its own right.

When it was over, Scelfo's 11-man senior class presented him with a plaque. Asked what it said, the coach smiled.