PASADENA, Calif. -- Moments before kickoff in the Rose Bowl, the referee's microphone inadvertently picked up five salty words (from somebody) for all of America to hear. They aptly foretold the entire night:

"Do you believe that [expletive]?"

Do you believe the Texas Longhorns, those can't-win-the-big-one kids, won the big one? 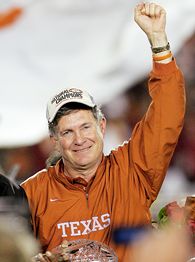 Do you believe the Longhorns won their first national title in 35 years against a bulletproof team that, until Wednesday night, couldn't lose the big one?

Do you believe they did it when all hope appeared lost, trailing by 12 points with six minutes to play?

Do you believe they scored 15 points in less than four minutes? With the quarterback once panned for his throwing motion completing nine pressurized passes in the final two drives -- then finally sealing the deal with the most incredible legs since Marilyn Monroe's?

Do you believe their routed defense rose up and stopped the unstoppable USC offense when it absolutely, positively had to?

Do you believe Mack Friggin' Brown, once the scourge of Texas fans for his team's pratfall performances in games like this, outflanked coaching golden boy Pete Carroll?

Believe it. Believe it all. Believe Texas 41, USC 38. And believe that this stunning reversal of form and fortune happened because of the gutsiest and most glorious six minutes in the gilded history of Texas football.

"It's really surreal when you're sitting there in the fourth quarter and you're down by two scores and you still think you're going to win," Brown said. "Even when you're playing a team that's won 34 straight games, and momentum has turned, and your defense is struggling -- but we never, ever really thought we'd lose the ball game.

Texas never gave up at the Alamo either, and look how that turned out. But this time, against similarly long odds, they pulled it off.

The 30 thrilling plays that will live in Texas lore began with one of many odd USC decisions on the night, blooping a kickoff that gave the Longhorns the ball at their own 31-yard line. (The Trojans had kicked it deep their first four kickoffs of the game, and Texas never started past its own 20 in that time.)

Then it was up to the greatest swashbuckling college quarterback since -- who, John Elway? -- to bring the Horns back from a 38-26 hole with their hurry-up offense. Vince Young has been Captain Comeback for two seasons, so the role was familiar. And, as usual, this drama featured Young dispersing the ball to a low-profile but reliable cast of supporting actors.

That made the score 38-33 with 4:03 left. The burnt orange half of the Rose Bowl perked up -- but the hardest part still remained.

The Longhorns somehow had to halt the Trojans short of scoring range. Doesn't sound so difficult when you're the No. 5 defense in the land -- but when USC is the opponent and the Trojans have positively shredded you in the second half, it gets a little dicey.

"We talked to the kids on the sidelines and said, 'We get one stop, we can get the ball back to our offense and win the game,'" Texas defensive coordinator Gene Chizik said. "Let's get one stop."

It didn't come immediately. Or easily. USC's first three plays of the drive pushed the ball to midfield. Then the game changed.

On second-and-7, Matt Leinart lobbed a screen pass to fullback Brandon Hancock. Leinart, who at that point had completed 18 of his last 19 passes, put the ball in Hancock's hands on the screen. And Hancock dropped it. That stopped the clock and saved Texas a timeout.

A LenDale White draw on third down brought USC to a crossroads play: fourth-and-2 from the Texas 45. Texas called timeout at the 2:13 mark. Carroll followed his customary gusto-laden instincts and went for it, shunning the punt.

During the timeout Brown laid out the massive stakes to his defense: "You stop this fourth-down play, we're going to win the national championship."

USC went with its best short-yardage play of the night: White, straight at 'em. But the run off left tackle was blown up by a Longhorn who was never supposed to be there.

Chizik called a blitz that did not include safety Michael Huff among the blitzers. Assignment be damned, he went in anyway.

"I had to get in there," he said. "In the heat of battle, five years in the program, I just went for it."

Huff knifed in and stopped White short of the marker. Texas had the ball back in the hands of Mr. Clutch.

"We knew they'd score," Huff said. "We had Vincent Young on our side."

And history on their side, too. Just last year on this very field, Texas had driven in dramatic fashion in the fourth quarter to beat Michigan, overcoming a 10-point deficit to win 38-37 on the last play.

"I can't tell you how much playing in the Rose Bowl last year helped us this year," defensive tackle Rod Wright said. "We knew we were capable of coming back. We didn't know how, we just had to get it done."

They got it done with four Young completions, spreading the ball around to Ramonce Taylor, Cosby and -- of all people -- senior wideout Brian Carter. He had 18 career catches coming into the game but made two huge ones on this drive for 26 yards.

Then, with 19 seconds left, Young got it done with his wheels, gliding the final eight yards to a touchdown bigger than all of Texas.

This was a comeback built upon the skill and will of Young, and through the trust he and Brown have come to have in one another. This was a triumph of relationship building and of a 54-year-old coach's ability to change and grow at an advanced stage in his career.

Brown said that within the last year he decided "to start spending more time asking kids about kids." Asking them about who they are and about their lives and trying to make sure they understood that it was more than just winning.

"I told them tonight as I told them Monday, I don't want this to be the biggest thing that ever happens in their lives. It may be the best sporting event in your life, and for some of them it will be for sure. But I want this to help them carry confidence later in life."

Brown's confidence in himself and comfort in his pressurized position has steadily blossomed over the last 12 months. A 10-year contract from athletic director DeLoss Dodds started the process, and beating Michigan accelerated it. Then Mack pulled the Oklahoma monkey off his back and beat it senseless in October, and he followed that with his first Big 12 title.

This was the crowning coaching achievement. The old rap is dead: Mack Brown can win the big one, and Texas can, too.

"We shut that door," Thomas said.

One door shuts, another one opens. Texas enters the throne room at last, after appearing hopelessly locked out just minutes before.