CINCINNATI -- The talk Thursday in this city was whether the Crosstown Shootout had lost its potency without Bob Huggins raging on the sideline.

That talk is officially terminated.

By the time resourceful Xavier had finally subdued valiant Cincinnati 73-71 in overtime -- a pitched battle in a broiling scream chamber of a gym -- the answer was in: This rivalry still sizzles, even when the King Lear of the Queen City was reduced to muted onlooker status from one of the corporate boxes in Xavier's Cintas Center (where he declined interviews). 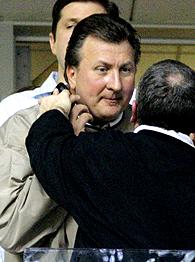 This game got along just fine without its human lightning rod of the last 16 seasons. Even with Huggins seated no more than 50 feet from the woman who famously forced him out last fall, Cincinnati president Nancy Zimpher, the real story was on the court -- where bodies flew, huge shots were made and missed, and emotions ran raw to the final horn.

XU-UC really is bigger than Bob. There's plenty of passion to go around, in perpetuity.

"I like to think this is about two basketball programs and teams," winning coach Sean Miller said. "This game's bigger than any one person. It's bigger than that."

The Xavier students did their duty as a diligent rival to revel in Huggins' acrimonious departure. (Among the signs: "Nancy Is The Man!" and "The Bearcats Need A Hugg.") But they saved the serious screaming and emotional energy for a game played with March intensity, if not always March execution.

"The electricity in the building -- they had a definitive homecourt advantage," said Cincinnati interim coach Andy Kennedy, who continues to do incredible work in a tight spot. "What a night for basketball in the city of Cincinnati."

Said Miller: "Unless you're in Cameron Indoor, that may be the only place any better than the atmosphere tonight.  What a war. What an amazing game."

It was this kind of amazing:

• Xavier, which came into the game stroking threes at a 40 percent clip, went absolutely blind from outside. The Musketeers were 1-for-18 outside the arc, and were outscored from three-point range by 27 points. They missed eight of their last 10 free throws.

Yet they still prevailed by annihilating Cincy on the glass, 56-41, and locking down the interior defensively. It's a rare thing when Cincinnati is demonstrably outmuscled inside, but that was the case Thursday night.

"That's the beauty of tonight," said emerging powerhouse center Brian Thornton. "We were able to find other ways to win."

• Cincinnati, whose bench is so threadbare that it played five guys between 35 and 44 minutes, stubbornly refused to submit. Kennedy pulled enough strings to get his team a halftime lead, then watched his guys stage 1½ last-minute comebacks.

Two three-pointers in the last 31 seconds of regulation forced overtime, and even a five-point Xavier lead with 1:20 left in the extra period wasn't safe. Cincy had two jump shots to take the lead or tie in the final 14 seconds.

When the horn sounded, Kennedy performed a fair Huggy Bear imitation. He sprinted 20 feet onto the court to F-bomb an official for not calling a foul on James White's off-balance last shot. That was built-up frustration from a night that saw the Musketeers shoot 28 free throws to Cincy's 11, and saw mercurial guard Jihad Muhammad foul out of a tie game on perimeter contact with Stanley Burrell.

In truth, the kids did decide it. And the fact that Xavier had more kids -- and fresher kids -- was the biggest difference.

The Xavier kids threw their bodies at Cincinnati strong man Eric Hicks in the post, doubling him relentlessly. They made treks into the paint so arduous that the Bearcats finally quit going there, jacking up 24 threes instead.

"I think we settled [for jump shots] a little too much," Kennedy said.

In overtime the deeper Musketeers sucked down every big rebound. The gassed Bearcats could not get off the ground or fight hard enough for position.

"Every time it was time to make a big play or get a big rebound, Xavier did it," said sassy Cincy freshman guard Devan Downey. "That's why they deserved to win."

Miller and the coach he used to assist here, Thad Matta, have built an admirably balanced roster. The Muskies played three seniors, two juniors, two sophomores and two freshmen Thursday night. With smart recruiting like that, a program that has had winning seasons 22 of the last 23 years -- under five different coaches -- should continue rolling indefinitely.

And there's no telling where the ceiling is for this particular Xavier team. It is now 12-2 overall, with the two losses by a total of five points on the road against Illinois and Creighton. XU has now won six straight, is worthy of a Top-25 ranking and appears poised to challenge George Washington for the Atlantic 10 title.

"Playing a team like Cincinnati, that gets it done, you would think we'd be able to get some respect around the country," said Burrell, who scored 20 points.

It's alive and well and potent as ever, even without Bob Huggins.