MORGANTOWN, W. Va. -- From penicillin to Popsicles, accidental discovery historically has been the true mother of invention. Some of the great advances in the human condition have come completely by mistake.

The same also can be true with basketball programs.

Say hello to the West Virginia Mountaineers, America's accidental powerhouse. The first-place team in the nation's best conference is a motley amalgam of coaches and players who didn't arrive in these rustic hills as part of some inspired master strategy. In fact, it's taken some fortuitously fluky circumstances that led them into these hills at all.

The players who make up the guts of this team thought they would be toiling in the relative anonymity of the Atlantic 10, not riding a surreal streak of hot shooting and heady basketball to the cusp of the Final Four last March, then to the top of the Big East this February.

If the Dan Dakich domino had not fallen four years ago, when the Bowling Green coach was hired and then quit as the West Virginia coach in a span of eight days, John Beilein and three of his best players would be Richmond Spiders today. If a welding certificate had not destroyed the St. Bonaventure program three years ago, nobody would be talking about Mike Gansey as an All-America candidate. And if Beilein and his unique offense had never arrived, it's possible that Pittsnogle still would be a regionally recognized proper noun, not a nationally celebrated verb. 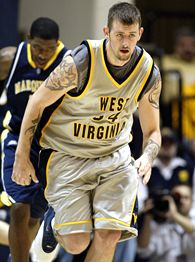 But all those things did happen. And the result has been a most excellent accident. It's been a "Eureka!" experience for a program that hasn't had days like these since Jerry West hung up his No. 44 jersey some 46 years ago.

The entire experience has been too grand for the Mountaineers to process.

"I think it'll take a couple years after we graduate and leave to figure out what it means," center Kevin Pittsnogle said.

But there is much more potentially to be accomplished before that time comes. Halfway through conference play, it's the Mountaineers -- not No. 1 Connecticut, not No. 4 Villanova -- who are the lone unbeaten in the Big East. At 17-4 and 8-0, No. 10 West Virginia is among the hottest teams in the country, one of the toughest stylistic matchups and one of the most legitimate Final Four contenders.

This sustained serendipity has been going on for almost exactly a year, by Beilein's reckoning. On Feb. 5, 2005 -- the coach's 52nd birthday, coincidentally -- then starting center D'Or Fisher came down with a cold, so Beilein inserted Pittsnogle in the starting lineup against Pittsburgh. He responded with 27 points in an upset victory.

The Mountaineers are 29-8 since then, including their upset-filled March runs to the final of the Big East tournament and the West Regional final in Albuquerque, where they fell an overtime short of the Final Four against Louisville.