But here's the ironic context for the film that celebrates the first
all-black starting five to win a college basketball national
championship: The year of "Glory Road" on the screen has coincided with
a season in which the two best college players in the nation happen to
be white.

In a startling spasm of inverse desegregation, this season has been
dominated by Duke's J.J. Redick and Gonzaga's Adam Morrison. They don't
come from overseas (such as last year's player of the year, Andrew Bogut)
or north of the border (reigning NBA MVP Steve Nash). The two
high-scoring upperclassmen are neck-and-neck for the national scoring
title, they're the only realistic contenders for national player of the
year honors, and their bicoastal competition has captured the country's
imagination. 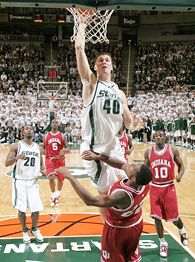 This occurs at a time when today's college kids seem encouragingly
unburdened by The Race Thing. There appears to be less obsessing over
race, less distrust between races in today's youth, more melding of
black and white music and dress and vernacular. That's societal
progress.

Still, anyone who says they haven't noticed that Redick and Morrison are white hasn't been paying attention. And anyone who shrugs it off as nothing unusual hasn't checked the history books.

Last time two white guys stood atop college hoops? Try 1970, and even
that's debatable. LSU's Pete Maravich won the player of the year awards,
but you could have a healthy debate about who was second-best: white
players Dan Issel of Kentucky and Rick Mount of Purdue, or black players
Bob Lanier of St. Bonaventure and Calvin Murphy of Niagara. Prior to
that, you have to go back to the early 1960s -- before Lew Alcindor and
after Oscar Robertson -- to find a white tandem comparable to Redick and
Morrison.

"I was with an NBA scout at the Maryland-Duke game and we started our
NBA talk with two guys: Redick and Morrison," said Washington Post
columnist and "PTI" co-host Michael Wilbon, one of America's most astute
commentators on race and sports. "When is the last time two white kids
led the NBA draft conversation? And the scout is black."

And this is not just a two-man production. Meet the supporting cast:

• There is a chance that the first-team consensus All-America team
will be a majority-white affair for the first time in 36 years. Those
who could join Redick and Morrison include North Carolina's Tyler Hansbrough, West Virginia's Mike Gansey and Kevin Pittsnogle, Michigan
State's Paul Davis and possibly Nevada's Nick Fazekas.

• Hansbrough is the prohibitive favorite to sweep national
freshman of the year honors.

• The nation's No. 1 team, Duke, has started a majority-white
lineup for the first time in a decade. Four other AP Top 25 teams start
majority-white lineups as well (Gonzaga, West Virginia, North
Carolina and Iowa). Last year, there were two teams in the final
AP Top 25 with majority-white starting lineups. No team has won the
national title starting three or more white players on championship
Monday since Duke in 1991.

Some of the best white athletes can be found in Morgantown, W.Va. The
Mountaineers' top four scorers are white, and at times they can see the
skepticism on the faces of opponents and hear it in their voices. Before
one game, point guard J.D. Collins, who is black, poked his head in the
huddle and told his teammates about it.

"J.D. said in the huddle, 'These guys aren't giving my white boys any
respect! They just think they can run over my white boys!' " guard
Patrick Beilein said. "And he was probably right. ... We look like a
high school team."

What's the conclusion? At minimum, this is a cultural trend break
(however temporary), and a challenge to a widely accepted sports
stereotype. Remember Sports Illustrated's 1997 cover question, "What
ever happened to the white athlete?" Answer: He's alive and well and
raining down jumpers in college hoops.

Peter Roby of the Center for the Study of Sport and Society at
Northeastern University said that white players' success "doesn't
surprise me at all. If you've been around basketball, you know kids can
play no matter what they look like."

But he also brought up the whites-can't-play-basketball stereotype.

"You know the old comment, 'For a white boy, he can really play,'" Roby
said. "It's unfortunate, but it has been [the case]. We've gotten too
used to defining everything by race. Our position at the Center for the
Study of Sport and Society is that sports brings people together and
makes race irrelevant.

"I hope the way we'll get beyond that is by having these discussions.
Things like this article can get us beyond the emotion involved with
race. If you get past skin color and stereotypes, Redick and Morrison
probably have a lot more in common with [black] players than not."

African-Americans are still the dominant racial-cultural
force at the high end of the college game, and Morrison and Redick don't
necessarily represent a new trend. But if nothing else, this season can
serve as a reminder that basketball is an inclusive sport. It can be
played on a virtuoso level by kids with braids and buzz cuts. They can come from major metropolitan areas and from Midwestern cornfields, and they can come from places like Roanoke, Va., (Redick); Spokane, Wash., (Morrison); Martinsburg, W.Va., (Pittsnogle); and Poplar Bluff, Mo., (Hansbrough).

"I think it's healthy," Wilbon said. "The only way white parents and
coaches and media people and mainstream culture at large are going to
stop sending the message of, 'You can't possibly play because you're
white,' is if folks see white kids play. It's the same kind of necessary
reinforcement as black kids seeing a black man work as a scientist.

"My position on this, consistently, is that white folks talk white
American kids out of wanting to play basketball, just like black folks
talk black American kids out of pursuing science or technology or the
law or literature. So I love this Morrison-Redick thing. And Pittsnogle,
too, for that matter."

So now the natural question: How do you explain the Morrison-Redick
phenomenon? There are various theories:

• It's a fluke, a demographic hiccup, a statistical blip that will
correct itself when this group moves on to the pros. There is no
definitive evidence that teenage America is teeming with future
Morrisons or Redicks. This may just be cyclical and not a statistically
valid sample from which to draw a conclusion.

• Early entry to the pros has been a largely black vehicle. And
white players are the ones filling that vacuum.

If there were no early entry, for example, LeBron James would be a
junior in college and Dwight Howard would be a sophomore. And Redick and
Morrison would have just a little competition for player of the year honors. In many cases, players most likely to stay in college longer and develop
their games are white. The list of recent white early entrants is short:
Chris Mihm of Texas; Mike Miller, Jason Williams and Matt Walsh of
Florida; Michael Bradley of Villanova; Troy Murphy of Notre Dame; Mike Dunleavy and Shavlik Randolph of Duke; Joel Przybilla of Minnesota; and
Robert Swift, straight from high school.

Of the All-America candidates mentioned above, Redick, Gansey,
Pittsnogle and Davis are seniors. Morrison and Fazekas are juniors. All
but Gansey either considered going pro last year, or could have
considered it. All stayed in school.

"I don't think it's a coincidence that Morrison and Redick are junior
and senior," said Roby, the former basketball coach at Harvard. "J.J.
Redick isn't anything now like he was as a freshman."

• Give the devil its due: the AAU/travel team circuit, rightfully
blamed for so many of the problems in youth basketball, has a positive
side. It's been a powerful integrating force.

Redick didn't spend his teenage years solely shooting jumpers on the
gravel court outside of his rustic home near Roanoke. His family drove him
across the state of Virginia to play with Boo Williams' highly acclaimed
(and mostly black) AAU outfit out of Hampton Roads. The Memphis Grizzlies' Miller didn't stay home in Mitchell, S.D., either. He traveled the national circuit, playing with and against kids from every metropolis. Same with Hansbrough.

If you're going to be somebody in basketball these days, you must play
on a traveling team -- no matter where you're from. To do that, you must
travel to bigger cities to play on better teams and against better teams.

"Don't underestimate the influence of the AAU programs here," said
author Charles P. Pierce, who has written frequently and insightfully on race and basketball. "Even white kids from white suburbs, segregated most of the time by the invisible barriers of class, have to play, travel and live with black kids from harder circumstances."

• Hip-hop. Don't underestimate its impact on basketball. Or on white America.

Redick has said that he likes the lyrics of Nas and Tupac, and much of
his publicized poetry is written in a hip-hop cadence. It's a
chicken-and-egg debate as to which came first for many young white
players -- immersion in hoops or immersion in hip-hop -- but there is a
synergy between the two.

"What we are seeing now coming through the college basketball pipeline
are the white children of the hip-hop culture," Pierce said. "These are
the kids who took the music and the style back to their suburban homes
the way the kids of the '50s brought jazz to the upper West Side and,
pretty soon, you had white musicians sitting in with the best of them.

"These are the crossover kids, who have defined their game within the
black cultural forces at work in music and, especially, in basketball. ... Redick is a classic trash-talker, and he didn't learn that from Chris Collins or Wojo [Duke assistant coaches Collins and Steve Wojciechowski]."

On this point, Roby disagrees, saying, "Last time I checked, basketball was here before hip-hop. We've had interracial teams since the '50s. ... When a
white kid walks into a group of black folks and shoots the lights out? He
gets accepted a lot easier than if he likes hip-hop."

• The kids who kept playing basketball through the white flight from the
sport are made of sterner stuff. They had to be to survive and thrive in
an era when the repeated message what that white men can't jump, can't
play and don't belong.

"I think, or hope, what we're seeing is that the white kids we're talking about were simply too strong of mind to be talked out of playing
basketball," Wilbon said. "And that takes guts. It really does."

Said Pierce: "I think, but cannot prove, that the change that came over
basketball in the 1980s and 1990s scared off a great number of white
kids, made them feel alien within the culture of the sport. The brave
ones stayed, and I think you're seeing the results of that today."

The result is a cultural curiosity, as Morrison and Redick lead a group of white players trying to rejoin their black colleagues on the Glory Road paved 40 years ago.