Now that everyone's bracket has been folded, spindled and Masonically mutilated, it's time for a moment of reckoning. After two of the most stunning, suspenseful and spellbinding weeks in the history of the sport, this is what we have learned:

Everything we believed to be true about this college basketball season has been rendered false.

Up is down. Down is up. The earth is flat. The sun rises in the west. The smartest Patriots coach is not Bill Belichick, it's Jim Larranaga. And America's team is George Mason.

Tell me you expected that before this sublime samba began.

Here's how wrong we've been:

All season, we believed the Big East to be the best conference in the land, deserving of its record eight bids and two No. 1 seeds.

Update: The Big East is out of the tournament.

We believed the Big Ten to be the second-best conference in the land, deserving of its six bids and three top-four seeds.

Update: The Big Ten might as well have been the MAC, failing to advance a single team to the Sweet 16.

We believed the Southeastern Conference to be significantly damaged by all of the players who left early for the 2005 NBA draft, dooming the league to a sixth straight season without a Final Four representative and continued SEC-ond-tier status.

Update: The SEC has two teams in the Final Four, with the possibility of having the title game to itself.

We believed the Pacific-10 to be a hideously bad league this year.

Update: UCLA is in the Final Four. Washington and Arizona acquitted themselves well.

We believed college basketball to be a guard's game now more than ever, with the evacuation of most top big men to the NBA before they put down roots on campus.

Update: Sell that notion to Joakim Noah, Al Horford, Jai Lewis, Will Thomas, Glen "Big Baby" Davis, Tyrus Thomas and Ryan Hollins. They were your heroes from the regionals, and none of them plays in the backcourt. (ESPN.com hereby invites 310-pound Big Baby and 275-pound-at-least Lewis to St. Elmo Steak House in downtown Indy for an eat-off. We'll pick up the tab, unless it runs into five figures.)

We believed last there was a significant drop-off from the top four or five teams to the rest of the pack this year -- and as of last Wednesday, believed there was a chance all four No. 1 seeds could make the Final Four for the first time ever.

Update: None of them made it for the first time since 1980 -- but a No. 11 seed did, tying the record for worst seed to get there.

We believed that the only problem with the Era of Parity argument was the 26-year stretch without a true Cinderella's reaching the Final Four. (Pennsylvania in 1979, if you're scoring at home.) Sweet 16s are nice, but can you truly label it parity if the mid-major types have no realistic shot at winning the national title? 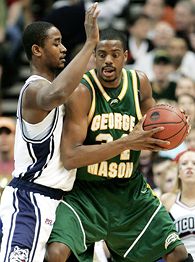 Update: Make way for Mason, which shattered the Cinderella ceiling by dispatching three of the top-10 programs in America: Michigan State, North Carolina and Connecticut. When a No. 11 seed from the Colonial Athletic Association makes the Final Four, the tournament really is an egalitarian triumph. All things really are possible. (Unless you don't get in. Think how they feel at Hofstra right now. The Pride beat George Mason twice late in the season and narrowly missed getting a bid.)

We believed we'd never see a regional round as breathtaking as last year, when four Elite Eight games rife with tension took four overtimes to resolve.

Update: Five of this year's eight Sweet 16 games went down to the final seconds, and three of the four regional finals either went into OT or sustained their drama into the final minute.

We believed it might be a long time before we saw another overtime-forcing shot in a regional final as dramatic as Patrick Sparks' rim-dancing 3 to tie Michigan State last year.

Update: Denham Brown's reverse layup against George Mason bounced on the rim only one less time than Sparks' 3 before falling through at the buzzer.

We believed in November that LSU, Florida and UCLA were probably a year away from serious contender status. That's why the preseason AP poll had the Bruins 19th, the Tigers 32nd and the Gators 41st. George Mason? Please. The Patriots got one fewer preseason poll vote than Hawaii, Houston and Notre Dame -- which is to say, none.

Update: One of those four walks off with the nets of the RCA Dome a week from tonight.

That's the chaos we leave behind. Here is what we have to look forward to:

We know that UCLA has nearly double the NCAA Tournament victories (89) of the other three schools combined (48). And the Bruins lead the Traditionless Trio 11-0 in titles.

We know that one coach will win his first title, and that only Florida's Billy Donovan has been to the Final Four before.

We worry that UCLA-LSU could be the ugliest defensive brawl at the Final Four since Michigan State beat Wisconsin 53-41 in 2000, setting the sport back several decades.

We predict that George Mason gear will be sold at an insane rate in the Northeast, and that every Big East fan base will wear its Patriots clothing when UConn visits in 2007.

We predict that fans in Indianapolis will embrace George Mason as the collegiate-level, latter-day Milan High School. The home state of the greatest underdog hoops story of them all is going to love the most gorgeous March Madness story since Villanova '85 or N.C. State '83, take your pick. College basketball needed this run -- needed it to make everyone believe again in miracles.

We wonder how different this tournament would look if Gonzaga could hold a lead against UCLA. If Corey Brewer hadn't thrown in a prayer while being pulled to the floor against Georgetown. If Denham Brown's final 3 hits net against Mason. If Darrel Mitchell's final 3 draws iron against Texas A&M.

"When you get into the NCAA Tournament, if you restarted the program over again, you would have four different teams [in the Final Four]," Florida coach Billy Donovan said Sunday night. "That's what happens when you play a one-shot deal."

That's the impact of chance and circumstance upon the Big Dance. It produces heroes you couldn't imagine, stories you'd never dare dream up. And sometimes, it challenges everything you believe to be true.