INDIANAPOLIS -- For a guy who just stumbled out of spring training and discovered the college basketball season three weeks ago, Gene Wojciechowski sure thinks he knows some things. I'm here to set him straight -- and tell him why Florida will beat the powder-blue pants off UCLA Monday night:

1. Find the weakness in Florida. Go ahead. I'll wait
The NCAA ranks all 326 full Division I teams in 15 statistical categories, and the Gators rank in triple digits in only one (they're 160th in turnovers at 14.6 per game). They're in the top 25 in eight categories, and lead the nation in field goal percentage. The Gators have size, athleticism, shooters, slashers, a post-up game, a commitment to defense and a willingness to share the ball.

UCLA, in contrast, ranks 100th or lower in eight statistical categories. Most are related to offense, where the Bruins occasionally can be uglier than Bob Knight in a bikini.

2. Billy Donovan has been here before. Ben Howland has not
Don't underestimate the importance of having experience in this little rodeo. In the past 40 seasons, only eight coaches won the national title in their first Final Four trip. No first-time Final Four coach has won the championship since Jim Calhoun in 1999. 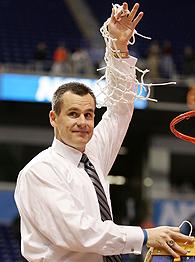 This is Donovan's second trip to the title game, the other coming in 2000. What he learned that first time can help guide his team from the giddiness of a Saturday victory through a Sunday of game prep and a Monday of nerves.

"You realize how long of a time it is from last night's game all the way to Monday night," Donovan said. "It's a long time. Feels like a week. ... The big thing right now is just to try to make sure our guys get rest, narrow their focus, try to give them some things they can take into the game and get prepared to play."

3. Banners don't win championships, players do
Tradition is a valuable thing to have on your side in the banter between fans. But UCLA's 11 national championships won't help the Bruins one iota come tipoff Monday. Forget John Wooden's gazillion titles; most of the guys playing in this game have dim-at-best memories of the title UCLA won under Jim Harrick 11 years ago.

Florida's players were careful Sunday to avoid repeating "Big Baby" Davis' complete dismissal of UCLA's tradition. But it was also clear that the boys from the football school are not in awe of what they see as ancient history.

"Right now, it's not about tradition," Joakim Noah said. "It's about playing basketball."

4. Florida has had the stronger tournament run
In numbers guru Ken Pomeroy's power ratings, he has a separate ranking for how teams have performed over their past five games. Coincidentally, that's the number of NCAA Tournament games Florida and UCLA have played. The Gators are No. 1. The Bruins are No. 3. In between? NIT champion South Carolina. Score two for the SEC.

Florida has won 10 straight games, has rolled four of its five NCAA opponents by at least 13 points and has played teams with a higher average RPI in the tourney than UCLA. The Gators' five opponents have averaged a 36 RPI, the Bruins' have averaged 40.

5. UCLA used up all its good karma escaping Gonzaga
The Bruins' desperate scramble to score the final 11 points of the game and extricate themselves from near-certain defeat was the Rally of the Year. That's nice.

But falling behind by 17 points against the champions of the West Coast Conference in a Sweet 16 game isn't the mark of a champion. Should UCLA get into a sizeable hole against Florida, don't expect a second miracle in the same tournament.

This is the Pac-10's year to be the bridesmaid. Ask the USC football team about that.

6. Balance
Florida has five players averaging double figures for the season. And for the postseason. And for the NCAA Tournament. You can't afford to slack off on any Gators starter defensively, or he'll bury you -- which is one of the reasons Florida ranks among the nation's leaders in assists. Every guy catching a pass is capable of putting it in the basket. 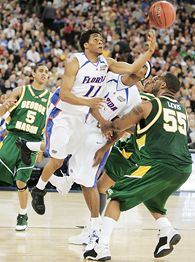 7. Layups, dunks and Lee Humphrey
That's been Donovan's offensive mantra this NCAA Tournament. The Gators are pounding it inside, driving hard to the basket, getting high-percentage shots ... or kicking it to Humphrey to handle the perimeter shooting. UCLA's help defense is the best in the country and an amazing thing to watch -- but the Bruins better be careful not to help much off of No. 12.

"If they double down [in the low post], that would be very exciting to me," Humphrey said. "If I have a shot of choice, that's the one I like to take."

8. Corey Brewer: matchup trouble
The 6-foot-8 Brewer has had a great Tournament, averaging 14.4 points and making 50 percent of his 3-point shots. He killed George Mason Saturday night, and he'll be a handful for UCLA as well.

Brewer figures to have a quickness advantage over Cedric Bozeman and a three-inch height advantage on Arron Afflalo, so either matchup should be difficult for the Bruins. Unlike Memphis wing man Rodney Carney, Brewer won't check out mentally if the game gets physical.

9. The Bruins don't want to run with Florida
No matter what Ben Howland was saying Sunday about how his team likes to push the ball, it's not true. Certainly not in this game, against this team. Back to the Pomeroy numbers: UCLA is No. 306 in his tempo ratings out of 326 teams.

If Florida succeeds in heating up the pace with full-court pressure, UCLA will quickly be out of its comfort zone.

10. Florida doesn't mind grinding with the Bruins
The flip side would not be a disaster for the Gators. They've won a couple of key slogball games this postseason, outlasting South Carolina 49-47 in the Southeastern Conference tournament championship game and beating Georgetown 57-53 in the Sweet 16. So a game played at a ponderous pace would not spell doom for Florida.

But it's not like Florida's dance team and cheerleaders would be better off wearing burkas. They were the class of the Minneapolis Regional and have represented the Sunshine State well in Indy. The blue garters the cheerleaders wear is a nice touch -- although it's tough to beat the powder-blue knee socks of the Bruins dancers.

12. Scratching the 10-year title itch
It's been a decade since Florida won the national title it most cares about, in football. It's also been a decade since Donovan's mentor, Rick Pitino, won his national championship at Kentucky. That symmetry beats anything UCLA has going for it.

13. The inside edge goes to the Gators
In the power-forward battle for Cameroon supremacy, Joakim Noah has height and length on Luc Richard Mbah a Moute -- and as athletic as Mbah a Moute is, he's not much more explosive than Noah. 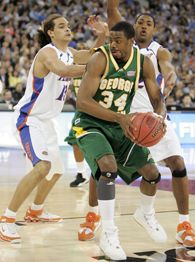 Center Ryan Hollins has emerged in this tournament for UCLA, but Al Horford is the better player. The Gators' interior backups are as good as the Bruins' as well.

14. Florida will actually run an offense
UCLA's suffocating defense has caused panic in most of its NCAA opponents, most notably Memphis and LSU. Those poise-poor teams couldn't quit their patterned stuff fast enough in the rush to freelance, which proved suicidal.

The Gators are hardly Pete Carrill-era Princeton with their execution, but they'll stick with their offensive gameplan in the face of defensive pressure. Point guard Taurean Green is disciplined enough to handle this game, and the rest of the starters all handle and pass well enough for Florida to run plays when the going gets tough.

Bottom line: The guard-centric Bruins are going to have to win this game inside the arc -- against an opponent that will not be held to 45 points. Do they have the scoring punch to do it? No.

16. Mascot superiority
Albert the Alligator is a more impressive sideline figure than that teddy bear UCLA trots out.

17. Bad losses
Florida has none. Of its six defeats, four were to NCAA Tournament teams and two were to NIT champion South Carolina.

18. Bad wins
Florida has none. It treated every weak sister on the schedule with the proper disdain, pounding through its nonconference schedule and handily dispatching the SEC's lighter weights.

UCLA has several. Any team that was life-and-death to beat Drexel (by one) and Wagner (by two) cannot win the national title. The Bruins also needed every second to beat hideously bad Washington State (RPI 166) at Pauley.

19. It's Donovan's time
He's one of just 12 active coaches to reach multiple Final Fours. He and Roy Williams are the only two coaches to reach the title game twice in this century. He built Florida quickly with star-studded recruiting, then tinkered with his formula to build the foundation more firmly around less-hyped recruits. He's ready to win a title. Ben Howland's time could be only a year away.

20. It's Florida's time
Arguably the state richest with athletic talent in America, it has never won a college basketball championship. There are scads of football titles strewn about the place, but nothing in hoops. It's time for the worshipers of the pointed ball to realize what can happen with the round one. Florida 65, UCLA 59.