INDIANAPOLIS -- The clock was draining, the giddy reality was setting in, the euphoria was spreading on the Florida bench.

With 1:24 left Monday night and the Gators up on UCLA 68-53, freshman David Huertas could wait no longer. He stood, bounced, howled -- and absolutely got scorched by his coach.

"Sit the [expletive] down!" Billy Donovan bellowed at the quickly cowed kid. "The game's still going on!"

Moments later, Donovan crouched in front of Huertas and offered some quiet, conciliatory coaching. This, in a microcosm, is the coach he has become:

Authoritative enough to command the absolute respect of his players. Still fundamentally nice enough to be liked by them.

The evolution of Billy the Kid into Billy the King is now finished. Just 40 years old, he's the only active coach under the age of 50 with an NCAA championship on his resume. But at age 40, he's also taken enough lumps, felt enough disappointments and learned enough lessons to have fully matured into a complete coach.

And everywhere you turned Monday night in the RCA Dome, people were overjoyed for the guy.

There were tears in Jeremy Foley's eyes in the final minute of Florida's 73-57 triumph. The Gators' athletic director hired Donovan 10 years ago, staking a chunk of his reputation on the whiz kid. This was the final payoff.

"It's hard to imagine this," Foley said later, standing on the confetti-strewn court as the Gators went to work on the nets. "A lot of hard work went into this. This is a special time for the University of Florida, and [Donovan] is something special."

Just then, Donovan grabbed his boss by the arm and ordered him up the ladder to snip his own piece of net.

In the stands, Rick Pitino's eyes were shining as well. Donovan's former coach at Providence and boss at Kentucky, dressed in an orange pinstriped black suit and joined by his wife, Joanne, and oldest son, Michael, was beaming with pride at his protégé's grand success.

"I was more nervous for him tonight than I've ever been as a coach," Pitino said.

Donovan got into this racket over Pitino's objections. After a brief career with the New York Knicks, Donovan took a job on Wall Street. Soon thereafter he called Pitino, seeking a coaching job.

"It's not you," Pitino told him. "Stay on Wall Street. Think about it and call me back in 48 hours."

Donovan called back. Pitino offered him a graduate assistant's job to help the rebuilding process at Kentucky.

"I knew the first day he arrived he'd be a great coach," Pitino said.

Donovan's career was as fast-tracked as Pitino's. He left Kentucky in 1994 to become the head coach at Marshall, then left after two seasons for Florida -- again, over Pitino's protests.

Pitino thought Florida was a bad job because the talent had evacuated after Lon Kruger's Final Four run in '94. A persuasive phone call from Foley changed Pitino's mind, and Donovan took the job with his blessing.

After two years of losing records, Florida found its footing under Donovan and took flight. The Gators went 22-9 and made the NCAA Tournament, and the next season made a fate-blessed run to the Final Four.

But that was almost too much and too soon for Billy the Kid. Expectations skyrocketed, and the more recruits he brought in, the more criticism he took.

A few coaches went after him for his recruiting practices, speculating that Donovan was cheating. He was turned into the NCAA at one point. However, no violations were ever found.

Then, when the Gators were eliminated on the first weekend of the NCAA Tournament five years in a row, the label shifted from alleged cheater to underachiever. 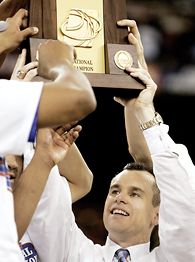 None of those criticisms are valid today.

In this team, Donovan's reshaped recruiting philosophy shines through. Two years ago, he took fewer big-name recruits but more team-first guys, resulting in the four-man sophomore class that just dominated the NCAA Tournament.

The rap that Donovan burned out his teams too early? Clearly not the case with this group. Even a 17-0 start on the season, best in school history, didn't fully display its potential.

This Florida team peaked in March (and April), where others had gone meekly to surrender. Donovan used those experiences to keep this team on task, and his 2000 title game experience showed Monday night.

As for Donovan lacking the requisite authority to keep his guys in line and on task? Ask Huertas about that little sideline eruption. Ask the other players he's ridden hard at times this season -- harder than he rode several of his recent teams.

And Monday night was clearly not a case of Donovan rolling out the ball and idly watching his team run up and down with the Bruins.

Pitino said that when he spoke with Donovan on Monday morning, Billy had decided that running a patterned offense would not work against UCLA's half-court defensive pressure and weakside help philosophy.

"We've got to drive and dish," Donovan told Pitino.

The Gators did exactly that -- with Green coming off ball screens, with Noah creating from the top of the key, with Corey Brewer slicing in from the wing. UCLA's help defense couldn't catch up to Florida's crisp ball movement. The result: a spectacular 21 assists and just six turnovers.

This was the final exclamation point on Donovan's March offensive credo: layups, dunks and Lee Humphrey in transition. A coach who loves the 3 embraced the power 2, with Humphrey's long-range shooting sprinkled in when the defense buckled.

And on the defensive end, the Gators showed that UCLA wasn't the only team that could lock up. They used pressure early to speed the Bruins out of their comfort zone, then settled into relentless pursuit of the ball in the half court. The Bruins were held to 36 percent shooting and just 18 percent from 3-point range, becoming another tournament victim of Florida's zeal to guard the arc.

UCLA was so lacking answers that coach Ben Howland had to use three stop-the-bleeding timeouts and a fourth to get his team's breath back in the game's first 24 minutes.

"Billy was well-prepared tonight," Pitino said. "That was a coaching clinic."