Next fall, he'll be the school mascot -- the guy wearing the buckskin outfit and firing the rifle on the sidelines at West Virginia football games. He's the latter-day Daniel Boone charged with bolstering school spirit.

Campbell won an exhaustive competition over dozens of rivals to be the Mountaineer. He advanced through rounds of interviews, performed during a home basketball game and grew a thick, reddish-brown beard. He'll look good in a coonskin cap. 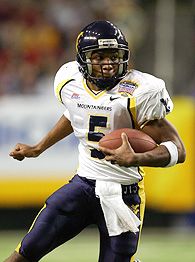 Last week, Campbell was enjoying his final few days as a normal college student before assuming the responsibility of Mountaineerness. Clutching a Budweiser in each hand at Bent Willy's, a hot college bar, Campbell announced that he had just two days of drinking left in his college career. Then he was giving up alcohol in order to be a dignified, sober-eyed mascot.

(Clearly, he's the wrong guy to ever be the Tree at Stanford.)

But even if Brady Campbell is giving up liquor, he's still drinking the Kool-Aid when it comes to West Virginia football in 2006. He's seen the schedule, he's seen the returning talent and he's joined me in predicting that a whole lot of couches will be kindling this fall in Morgantown.

"Expectations are for us to go undefeated," Campbell said.

Go tell it on the mountain. And across the fruited plain, for that matter. I'm not alone in picking these guys No. 1.

"National champs on three!" coach Rich Rodriguez says when he brings his team together at the end of each spring practice.

So they're not hiding from the buzz. Not embracing it by any means -- Rodriguez's humble-and-hungry counterstrike mantra is pervasive -- but not hiding from it, either. That's why the end-of-practice chant is what it is.

"It's in our thought process," quarterback Pat White said of the national title. "We want to work like the best, prepare like the best, do everything the best."

Said White's spread-offense running mate, Steve Slaton: "We're very aware of it. It's a thing in the back of our mind. We have the ability and the talent, and if we keep getting better day by day, I don't think there's anybody who can stop us."

To win it all, the Mountaineers must run through the brick wall of history, both ancient and recent.

Consider the ancient: West Virginia has been playing football for 113 years and has won 642 games without winning a national championship. There isn't even a sketchy power-rating title from a bygone era to claim.

"We're very aware of it. It's a thing in the back of our mind. We have the ability and the talent, and if we keep getting better day by day, I don't think there's anybody who can stop us."
Steve Slaton on WVU's title quest

In the annals of the sport, no Division I-A school has more victories without a title. West Virginia qualifies as the best empty-trophy-case program in America.

But now, armed with a user-friendly schedule (seven home games, with a visit to Louisville Nov. 2 looking like the showdown game) and scads of returning players from a stunning 11-1 2005 season, the Mountaineers are the buzz team in college football.

Wide receiver Chris Henry was an all-world cancer, and the NFL rep of cornerback Adam "Pac-Man" Jones leads you to believe that he wasn't the ideal leader in Morgantown, either. With those two guys as the most talented players on that 2004 West Virginia team, the mission was doomed.

"We've been through that, when we had high expectations and failed," Playboy All-America guard Dan Mozes said. "Some guys thought more about the next level than about the team. That's not going to be a problem with this team."

To that end, you have a hard time getting the senior class to talk about anything other than West Virginia's opening opponent: hated in-state rival Marshall. It should be a talent mismatch, but consider the depth of this rivalry: the Thundering Herd's abysmal basketball team upset the Sweet 16-bound Mountaineers each of the past two seasons.

So Mozes and fellow senior offensive lineman Jeremy Sheffey will play the bad cop roles if they see the focus blurring or craniums inflating over the summer. Gladly.

"I'm kind of a jerk," Sheffey said. "I've said stuff to certain guys in the past who got out of hand. I'm not above getting in confrontations in practice. That's kind of my role.

"So I can be a jerk to guys who get too big a head. I don't take that very well. Those guys don't have my respect."

West Virginia had almost nobody's respect going into last season, but low expectations combined with a high level of cohesion to produce a significant surprise. All the talk in the Big East last year was Louisville, but the Mountaineers quietly coalesced off-radar around a powerful offensive line, a young-but-flush backfield and a coach who absolutely knows what he's doing.

Two moments captured the magic of the season: a miracle rally against Louisville and a preposterously gutsy fake punt against Georgia.

West Virginia was down 17 points in the fourth quarter to the Cardinals when starting quarterback Adam Bednarik went down with a foot sprain. It might have been the most fortuitous injury in program history. In came White, and from that moment on Bednarik was effectively Wally Pipped.

White led the Mountaineers to touchdowns on their last six possessions, three of them in overtime, for a 46-44 victory. Slaton officially launched his star that game as well, scoring a school-record six touchdowns.

"The switch just flipped, right there," Sheffey said. "Literally all of a sudden, the motor got in sync. You hear about people clicking? That's what happened.

"When things started going right with us, they stayed going right. It's that snowball effect. When it all comes together, it's a beautiful thing."

The snowball turned into an avalanche, and West Virginia's smashmouth offense turned unstoppable. The Mountaineers averaged 40 points per game the last half of the season, mercilessly jamming the ball down defenses' throats with the following game plan: we're gonna run, try and stop us.

"You can feel the confidence in the huddle," Sheffey said. "Third and 8? Let's run it. [Let's run] Iso. It didn't matter what he called, it was going to work."

Thing is, that snowball effect went underappreciated nationally. The Louisville breakthrough happened virtually simultaneously with the riveting drama of USC-Notre Dame, so nobody saw it. The four opponents that followed were unranked Big East teams.

They started taking the Mountaineers more seriously when the score was 28-0.

"I'm telling you, I stood on the sidelines talking to coach [Calvin] Magee on the headphones early in the game," Rodriguez recalled. "I said, 'I think we're shocking them a little bit right now.'"

Georgia overcame its shock to close within 38-35 with five minutes left, but it never got the ball back. That's because Rodriguez called a fake punt near midfield on fourth and 6, spreading players sideline to sideline on the line of scrimmage and running punter Phil Brady for 10 yards up the gut.

It was an insanely brilliant call.

Rodriguez said they had Georgia positioned for the fake three times in the game, but the first two were fourth and 14 and fourth and 18, respectively. At fourth and 6, with the game on the line, Rodriguez put the fake on.

And stuck his neck out.

"I said on the headphones, 'Do we got it? Hello? Hello? Anybody there?'" the coach said, laughing. It's likely an apocryphal story, but there's little doubt that Rodriguez put himself out on a limb with the call.

Now he's got himself out on a limb again, with the state expecting 12-0 and a Fiesta Bowl berth. Even the Mountaineer is calling for it -- and you hate to irritate a man who brings a rifle to the stadium.