SOUTH BEND, Ind. -- It's come to this for Brady Quinn:

He was trying to move out of his dorm room in Dillon Hall at semester's end when he discovered 50 or 60 footballs piled up outside his door, all with notes from the awestruck and the opportunistic, requesting autographs. He'd already endured a steady stream of knocks on the door during finals, seeking his signature on something Notre Dame-related. Study sessions in the library had been interrupted by others anxious to meet and greet the Fighting Irish quarterback. 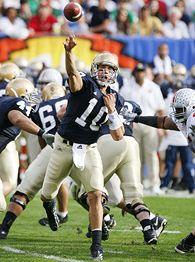 It was as if nobody could leave campus for the summer without taking a little bit of Brady home with them.

"It became somewhat disappointing," Quinn said, "that people wouldn't let you be a normal student."

Brady Quinn left normal behind about nine months and 32 touchdown passes ago, when he became a certified Golden Dome action hero by leading the resurgent Irish to a 9-3 season. When strangers recognize you on the beach in the Cayman Islands during spring break, normal is out the window. When fans are gathered outside your dorm at 7 a.m. the day of the spring game, forcing you out a side entrance to get to your car, normal is history.

But if the path from now to January 2007 goes the way Quinn has plotted it, the journey into abnormal is only beginning. The perfect publicity storm is preparing to blow up around the quarterback from central casting.

Combine the elements -- Notre Dame QB and Heisman Trophy front-runner on a preseason top-five team, playing for the ultimate offensive coach and possessing every imaginable off-the-field attribute -- and you have Category 5 hype.

Notre Dame, eager to produce its first Heisman winner in 19 years, its first Heisman-winning quarterback in 42 years and its first consensus first-team All-American QB in 38 years, seeded the clouds Wednesday. It invited a handful of national media members who cover college football to sit down with Quinn in South Bend.

The conclusion from that interview: If anyone can survive the perfect publicity storm with his soul and sanity intact, bet on Brady.

It will take focus. A guy with a double major in political science and finance, on track to graduate in 3½ years from an elite institution, has it.

It will take perspective. A guy who has embraced the unique familial charms of Notre Dame, from the omnipresent spirituality to the vibrant dorm life to the famed intramural bookstore basketball tournament, has it.

It will take humility. A guy who works in Notre Dame's Office of News and Information during the offseason, because he doesn't want to stick his parents with his cell phone bill or bug them for gas money, has it.

"It's hard to really even think about yourself [as a celebrity], or even to be labeled as a role model," Quinn said. "I'm just a 'slappy,' as Coach [Charlie Weis] would say. I'm just a college student at Notre Dame and playing football, trying to have fun with it.  To me it's just mind-boggling."

The mind-boggling part to others is how Quinn has handled it all. By all accounts, the modesty vibe he gives off is not false.

"As things have gone off around him, I've just really been impressed by his ability to remain as he was when I first met him," said Quinn's freshman-year roommate, Matt Ploszek. "Everyone asks [what Quinn is like] and they expect the athlete/playboy/dumb jock kind of stories. Everything I can say goes completely against that."

Everything Quinn says about himself describes a guy who has struck a serendipitous balance in his life. He doesn't take himself too seriously, yet he approaches his sport and his schoolwork with the utmost seriousness.

"It's hard to really even think about yourself [as a celebrity], or even to be labeled as a role model."
Brady Quinn

When Quinn and his girlfriend of five years, Miami (Ohio) soccer player Lindy Slinger, went to the Caymans for spring break, they invested in a one-week membership at a gym. They worked out every day in paradise.

At home, Quinn is an obsessively healthy eater. He stopped drinking sodas during middle school, and his description of his average daily meals is almost Marinovichian: oatmeal, egg whites, whole-grain toast and a berry-blend juice drink for breakfast; turkey sandwich with low-fat cheese, baked chips and an apple for lunch; chicken, fish or lean beef for dinner.

He inhaled Weis' coaching last spring, summer and fall, after the former New England Patriots offensive coordinator replaced Ty Willingham and helped make Quinn a star. And during Christmas break last December, when most college kids were cutting loose, Quinn was busy absorbing Ohio State videotape in preparation for playing the Buckeyes in the Fiesta Bowl. He watched every play Michigan State quarterback Drew Stanton made against Ohio State, looking for an edge. (He found a few, but Notre Dame's defense let the Irish down in a loss to the Buckeyes.)

He's largely the same in the classroom, pushing himself through heavy summer course loads to get the double degrees ahead of time. Quinn took nine hours of summer school after his freshman year, 13 last year and will take nine again this year. That will free him to "coast" into December commencement with three upper-level fall classes -- none of which will be ballroom dancing.

Of course, Quinn could have joined America's favorite ballroom-dancing quarterback, Matt Leinart, in the NFL draft last month. He chose a senior season, just like Leinart did a year ago. 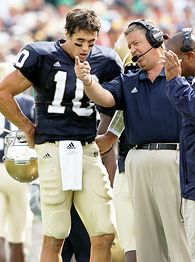 "The second thing, I didn't prepare myself like I have this summer, with agents and physically.

"And the last thing, that probably mattered to me most, I came here with dreams of winning a national championship. Based upon the talent we have coming into this year, why would I ever leave that? Why would I ever go somewhere else, when this is my last chance?"

And truth be told, this is where Brady Quinn always dreamed of being. He always wanted to play quarterback at Notre Dame.

As a middle-schooler, he used to drive over from his hometown of Dublin, Ohio, to see games with a friend whose brother was a student at Notre Dame. They'd spend the night crashed on his dorm-room floor.

But even as Quinn's high school career progressed, Willingham's staff was slow to warm to him. Ohio State and Michigan were interested, and Quinn said he was almost ready to commit to the Wolverines before making an academic visit to Notre Dame the June before his senior year.

Earlier that month, Quinn had toured about seven summer camps across the South, stopping for a day here and a day there to throw passes and learn about the host schools. After a stellar showing in South Carolina, the recruiting calls picked up -- including calls from Notre Dame.

That was all it took.

"Going to ND, I was kind of living out that childhood dream," Quinn said. "Once I got here on campus, I couldn't imagine myself anyplace else."

No school in America has a campus community quite like Notre Dame's, and Quinn has eagerly mixed in. There are no jock dorms that isolate athletes here, which is fine with the biggest athlete in school.

During the interview Wednesday he made sure to give the names of the "regular students" who were part of his champion bookstore basketball team -- for the record, Eric Laumann and Chris Devitt were "awesome" as members of Quinn's team, cheekily named You Got A Bad Draw.

"I'm convinced Brady Quinn didn't come to Notre Dame just to play football," said Ploszek, who's not on the football team. "I think he absolutely fits in with the general trends toward campus involvement."

The Notre Dame campus has, at times, been a little too involved in Brady Quinn's private life. But if he has the kind of season he has envisioned, the mania won't be confined to the quad. It will ripple nationwide, as a remarkable student-athlete leaves normal further and further behind.