The e-mails come from across the globe, deluging a University of Pennsylvania Web site with personal pep talks for an utterly oblivious beast.

"Barbaro, I am only 12 but if I was 30 I would become a vet and make you better in one second!" wrote Maeve Geismar of Annapolis, Md. 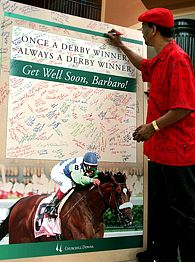 "You are such a sweet baby! Our love for horses is so represented by the outpouring of well wishes for you! Mend and have the best life!" wrote Mary Baird, 49, of Pflugerville, Texas.

The means of expression have changed since the Ice Age, when prehistoric man drew pictures of horses on cave walls -- more images of horses, according to one study, than of any other animal. The emotion behind the expression remains the same in the computer age. Barbaro's jarring journey from champion to victim to (so far) survivor serves as a societal reminder: Our bond with equine kind is indefinable, intimate and infinite.

"The horse is still sort of a shadowed deity in the culture," said John Jeremiah Sullivan, a writer-at-large for GQ whose fascinating 2004 book, "Blood Horses," in part examines the joined histories of man and horse. "There's just this inexplicable sense of attachment that goes back to the very beginning.  The closest thing I have to a theory is that this association has been part of the species for so long -- this instinct to venerate them -- that it has almost wired itself into our cultural DNA."

That wiring is rarely more conductive than when a thoroughbred is injured.

For about two days we flat lost it on behalf of a horse. And we're just now starting to get it back.

Barbaro's injury and the efforts to save him -- not Barry Bonds' 714th home run, not the NBA playoffs, not the Stanley Cup -- was the dominant sports news Sunday and Monday. It's been a prominent story on every network morning news show this week. Coal miners trapped underground might not have been monitored as anxiously by the public as the colt undergoing surgery to repair his lower leg.

Since coming out of surgery, Barbaro has been bombarded with more than just thousands of e-mails. Bushels of apples and carrots have arrived at Penn Veterinary Medicine's New Bolton Center -- enough to feed every horse in the hospital's care. Cards, pictures, posters -- even religious figurines have been sent, tribute to Sullivan's shadowed deity.

Up until Barbaro's bad step in the Preakness, he'd produced exactly 121.36 seconds of athletic connection with the populace -- the time it took him to win the Kentucky Derby on May 6. Yes, he had won five previous races, but the vast majority of the e-mailing, nail-biting, hard-praying public had never seen them. They only knew the colt they saw win the Derby by a resounding 6½ lengths.

So by the time the gates opened at Pimlico Race Course -- the second time, not the first, when the colt ominously false started -- Barbaro had not done enough to make America fall in love with him. But it has long been in love with horses in general.

That didn't start with domestication of the animal, which Sullivan's book estimates occurred 7,000 years ago. Nor had it ended after we ceased using the species as a primary means of transportation. Our affection for horses always has extended beyond utility.

And when a race horse is severely injured before our very eyes, the reaction is outsized.

A couple attempts at answers:

• In drama-addicted America, human starvation does not resonate like a horse breaking his leg. You cannot see starvation happen on live television, per se. You can, however, see Barbaro limping awkwardly and desperately on three legs, holding his wounded limb in the air, and feel the panic and pain of the moment.

Even worse, this breakdown happened right in front of the grandstand -- in full view of many of the paying patrons. Think back through the most memorable and traumatic breakdowns in racing history and they generally occurred front and center, in the stretch: Go For Wand's ghastly crash in the 1990 Breeders' Cup and Ruffian's shattered leg in the 1975 match race with Foolish Pleasure.

Barbaro's injury immediately conjured images of Ruffian: two undefeated horses seemingly on the cusp of an historic achievement -- for Barbaro the Triple Crown, for the filly Ruffian a battle-of-the-sexes triumph over the reigning Kentucky Derby winner -- when they shockingly were hurt. Some fans still aren't over the loss of Go For Wand and Ruffian, who were destroyed. The same would be true this time, if Barbaro does not pull through.

• Bonds' hitting 714 was inevitable. Barbaro's breaking his leg certainly was not. It was a wholly unpredictable outcome -- especially to casual fans who don't know the grisly statistics on how common thoroughbred breakdowns really are.

And while it is easy to cheer against Bonds and other athletic churls, cheaters and chokers, race horses are -- like most domesticated animals -- almost universally laudable creatures. They try hard, do not complain and do not get in much off-the-track trouble. They're pure.

And they are absolutely beautiful, at rest and especially in motion.

Their involuntary presence in our sporting marketplace is probably a large part of the empathy that pours out when an animal gets hurt. Racing is a guilty pleasure to many fans, who sublimate concerns about the manifold health risks to the animals in order to enjoy the thrill of the sport. Those concerns confront us when a horse breaks down.

"There's this hypocrisy to it, too," Sullivan said of the societal fondness for its race horses. "Of course this kind of thing happens because they're being asked to do something their bodies aren't able to do."

That is the tormented nature of the current relationship with our old friend the thoroughbred. We don't e-mail the healthy ones.