OMAHA, Neb. -- There are eight flags flapping behind center field at Rosenblatt Stadium, each one bearing the name and school colors of the teams in the College World Series.

In a new twist this year, they've lowered the losers' flags to half mast upon their elimination from the tournament. Only two remain at full staff.

On the far right flaps the stubborn one of the group, the orange banner with the black letters that reads "Oregon State." It apparently has been plastered to the top of its flag pole with super glue, because that sucker just refuses to come down.

Five times in this CWS, the Beavers have taken the field on the verge of elimination. Five times, they have hocked a loogie into the eye of defeat and played on. They're harder to kill than crabgrass, tougher to evict than Cindy Sheehan outside W's ranch.

Losing their CWS opener to Miami by 10 runs put the Beavers on the endangered list, but nobody can force them into extinction.

Georgia tried first and failed. Miami flamed out in the rematch. Rice, the national No. 2 seed going into this NCAA Tournament, had two shots at Oregon State. The Owls not only couldn't get a win, they couldn't score a run. 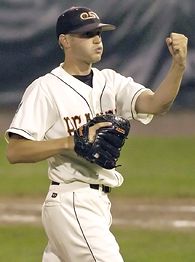 Now, with a gutty-but-gutted pitching staff held together by ice packs and prayers, Oregon State has scrambled back off the ledge one more time. Six innings from elimination and five runs down Sunday night, the Beavers rallied to shock North Carolina 11-7 -- their greatest season extender yet.

That sets the stage for the ultimate in college baseball theater Monday night: one game, winner takes all, loser's flag gets lowered. The pitching matchup favors the Tar Heels, but the intangibles favor the team that always seems to win the cage-match game.

"I'll take what we have right now," Beavers coach Pat Casey said. "I'll take my guys, wherever we go."

The one place they refuse to go is back to Corvallis. Not when the chips are down. Not even when it looks as grim as it looked Sunday night.

This was the ultimate test of faith for Beaver Believers. Down one game to none in the championship series, Oregon State promptly fell behind 5-0 to the Tar Heels in Game 2.

"First thing through my mind was, 'Oh s---, here we go again,'" said spunky shortstop Darwin Barney. " I was pissed.

The way they found was a classic dose of BeaverBall, which consists of gnawing the opposition to death, one little bite at a time.

Bunts are everywhere. Walks are abundant. Sprinkle in the occasional stolen base. Apply pressure with speed and see how the opposing fielders handle it. Then supply the timely big hit.

The BeaverBall barrage in the fourth inning, down five, was a seven-run explosion. It was fueled by all of four hits.

It appropriately began with center fielder Tyler Graham taking first after being plunked by Carolina starter Robert Woodard. Freshman John Wallace shook off some ugly early mistakes in the game by following with a single. Then Graham brazenly stole third, a galvanizing play in the Oregon State dugout.

"When Tyler stole the bag at third, I think it was a message: 'We're not surrendering.' " Casey said.

They had only begun to fight. Chris Kunda followed with a full-count walk, then Shea McFeely doubled to left field to score two runs and chase Woodard from the game.

"I didn't show the mental toughness I usually have tonight," Woodard said, looking like he was ready to dig a ditch and lie in it all night. "I'm very disappointed."

But getting to the Carolina bullpen in Omaha has only guaranteed one thing for opponents: a loss. The Heels relievers hadn't allowed a single run in 12 2/3 innings of work here. 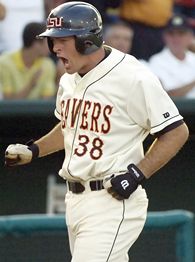 Then they were lit up by BeaverBall. Barney drove in a run off Matt Danford with a single, then McFeely scored on a Danford wild pitch. Still down 5-4 at that point, Bill Rowe put Oregon State ahead for keeps with a vicious three-run homer to right field.

That was the boost heroic Oregon State reliever Kevin Gunderson needed. The closer worked a marathon in this one, pitching the final 5 1/3 innings to rescue a Beavers bullpen that had no other options.

"You've got a guy the whole team completely trusts on the mound," said Barney of Gunderson. "And he's shovin'."

Just in case, the Beavers tacked on four more runs in the sixth as their small-ball style steadily frayed the Heels' composure. A misplayed bunt here, a blown double-play there, a passed ball  suddenly the Heels were out of sorts and out of contention.

"You have to make plays against them," Carolina coach Mike Fox said. "If you don't, they're going to punish you."

Nobody had punished the Heels like this, not in weeks. They'd won their first nine games in this NCAA Tournament, morphing into a juggernaut at just the right time, a la Florida in the NCAA basketball tournament.

A guy who knows a little basketball, Carolina coach Roy Williams, was smiling and applauding in the stands Sunday night. Like everyone else in powder blue, he had to think this one was in the bag.

Now Carolina must overcome the shock of losing what looked like a sure thing.

Fox at least has the comfort of handing the ball to Daniel Bard, a first-round draft pick with a 9-3 record. Casey, who has a team full of dead arms that are being sustained by big hearts, probably goes with what's left of Jonah Nickerson.

All Nickerson has done in Omaha is heave 223 pitches in two starts over four days, eliminating both Miami and Rice. Asking him for more on three days' rest seems a bit perverse, but Oregon State has no other viable options -- and Gunderson is probably blown up for anything but a one-inning closeout.

At this point, Oregon State has become the Black Knight in Monty Python's "Holy Grail." Missing limbs? Just a flesh wound. The Beavers don't know when they're beaten, and wouldn't admit it if they did.

"We're going to feel good, man," Barney said. "It's going to be fun. One game, for the national championship? You dream about this."

On paper, the dream matchup favors North Carolina. But that orange-and-black flag in center field might not come down unless the Tar Heels take a hacksaw to the pole.