The arms can stay here, because the College World Series trophy is going home to Corvallis. The Beavers are perfectly willing to make that trade.

Behind a trio of Herculean pitching performances, Oregon State won the second national title in school history and the first in any sport since a cross country championship in 1961.

For a school that was never supposed to be able to compete with the warm-weather competition, this was a historic breakthrough. Oregon State becomes the second-most northerly college to win a national baseball championship. 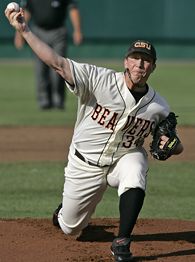 For a team that could never breathe easily in Omaha, this was a spectacular run of do-or-die baseball. The Beavers won six straight elimination games to capture the CWS.

And for a power-deficient squad that had to get by with small ball, defense and the men on the mound, this was a pitching tour de force. Jonah Nickerson, Kevin Gunderson and Dallas Buck threw until their wings were screaming, their legs were burning and their backs were locking up.

Then they threw some more.

"If I could take all their arm pain and put it in mine, I would," first baseman Bill Rowe said. "Because they deserve it."

"They came out and bowed their neck and buried the thing in the dirt," Oregon State head coach Pat Casey said. "They played like champions."

Nobody more than the he-man hurlers. There are sweatshops that work their labor more gently than Casey worked his three studs -- but Casey hardly had a say in the matter. Nothing less than a six-point restraint would keep these guys from pitching Monday night.

Nickerson threw an even 100 pitches Monday, bringing him to a masochistic 323 in an eight-day span in Omaha. The work in the title game came on three days' rest, which was a luxury compared to his previous outing. That one came on two days' rest.

He was the only logical choice for CWS MVP after gritting his way through 6 2/3 innings Monday night, allowing only two unearned runs and giving the Beavers a chance to steal the thing from a more rested Carolina squad.

Pitching coach Dan Spencer went out to hook Nickerson at one point and came back without him.