INDIANAPOLIS -- Now I know how an ornithologist feels.

I can identify with the guy who sits in a forest with binoculars pressed to his face for hours, waiting for his pulse rate to explode over a fleeting glimpse of the Sardinian Warbler or the Azure-winged Magpie.

I was that guy Thursday at the Nike All-America Basketball Camp, minus the binocs and the stupid hat. I was keeping vigil for something rare -- exceedingly rare in July:

Amid the fundamental moonscape that is the July camp and tournament circuit, there are several basic basketball tenets that are harder to find than the remains of Jimmy Hoffa: a jump stop, a taken charge, a screen away from the ball ... and a jumper that (purposefully) deflects off the glass and into the basket.

With the kiss? Not here, Bill Raftery. You'd see more smooches in a monastery than at the average summer showoff emporium.

The hot hoops topic here at Nike? The (almost) 720-degree dunk by Air Up There from that famed bastion of fundamentals, the And*1 Tour. Didn't hear much talk about bland, boring bank shots.

Thursday afternoon there were six games played at the Nike camp, three each on two side-by-side courts. College coaches, family members and media snoops had the games surrounded.

By rough estimate, there were 720 shots lobbed -- with a wide variance of accuracy -- at the baskets on the IUPUI campus. I didn't see them all, by any means, but here's my bank shot tally:

Take a bow, Willie Warren, rising junior from Fort Worth, Texas. You are my Sardinian Warbler. You made the only banker (beyond layup range) that I saw in three hours of watching.

It was a thing of understated, unglamorous beauty. Warren launched it with apparent full purpose of using the glass from roughly 15 feet out, on the wing. When it dropped, they should have stopped the entire camp and awarded the young man the game ball. 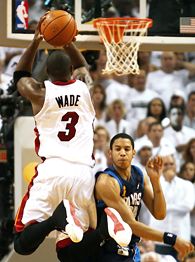 Of course, they didn't. It was briskly back to errant no-look passes and forced shots. But I saw what I came for -- the briefly blooming flower in the desert.

Fittingly, Warren was nowhere to be found come interview time. Like the art of the bank shot, he disappeared.

I did catch up with the other guy who tried one off glass, Sammy Zeglinski of Philadelphia. His, from about 10 feet out while on the move, didn't even catch iron -- but at least he tried one.

Asked what possessed him to use the rare square, Zeglinski shrugged.

"I just shoot," said the rising senior guard at William Penn Charter School. "However I can get it up there. I don't really go out there and practice [bankers]. But it's definitely a good shot to have."

So why doesn't anyone have it anymore?

"It's gone by way of the 3-point shot," said Boston College coach Al Skinner, who called glass quite a bit during his successful pro career. "Guys don't have a mid-range game. ... I don't think you'll ever see another Sam Jones, put it that way."

(For those much more familiar with Sam Cassell than Sam Jones, here's your ancient history lesson: Jones banked in just about everything on the way to the NBA Hall of Fame and 10 championship rings as a member of the Boston Celtics.)

Skinner is correct about the evaporation of the mid-range game. The 18 feet of court between 3-pointer and dunk range is the loneliest hardwood in basketball. On the occasions when shots are fired from no-man's land -- even from the wings -- they seldom involve the backboard.

"About one out of every two kids we bring in, it seems, knows how to shoot it," said West Virginia coach and fundamental fanatic John Beilein, who scours for kids with a working knowledge of the fundamentals. "They haven't tried a lot of them. ... It teaches people the right arch to use -- good arch and good spin. It's not easy to make a bank shot with sideways spin."

Thing is, basketball is the ultimate copycat game. There were at least two Nike campers wearing Dwyane Wade tights or super-long socks Thursday -- but nobody modeling his ubiquitous bank shot that absolutely killed Detroit and Dallas in the NBA playoffs. 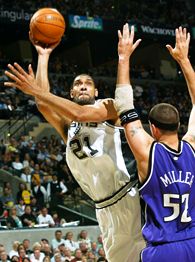 Seemingly every tenacious Wade drive in June ended with his caressing the ball off the backboard. It's the perfect way to get shots over taller defenders, and it gives the shooter a wider margin for error.

If Wade -- and, prominently among big men, Tim Duncan -- can use the glass, where are the copycat kids?

Crean has his team do a 15-minute segment every practice on backboard shooting, a drill he got while an assistant to Ralph Willard at Western Kentucky in the early '90s.

"We still use it," Crean said. "You achieve what you emphasize."

Crean made bank shots an emphasis with Wade midway through his junior (and final) season at Marquette. He put together a 10-game segment of tape showing his star wingman ignoring the backboard from the wings.

"We showed him that he was not getting nearly enough shots off the glass," Crean said. "Once he started to have success with the backboard, you were preaching to the choir."

It's time now to preach to the unbelievers in American youth basketball. Save the bank shot, before it goes the way of the dodo bird.