It's early August, which means most college football fans have regressed into 5-year-olds with a week left until Christmas. The suspense is killing them and the calendar is moving in cruelly slow motion.

Labor Day weekend seems eternally out of reach, with too many soul-killing baseball games still to be played between now and kickoff.

To pass this excruciating time constructively, I say it's time we get educated. In homage to Bill Maher, whose schtick is blatantly and unapologetically ripped off here, I offer the New Rules for College Football Fans, 2006 edition:

New Rule: If the scoreboard says you lost, you lost. That's not going to change. Take an hour to vent postgame, then try to regain your sanity. Do not diminish your quality of life -- and the quality of life of those around you -- by spewing for days about the refs who cheated your team, the flagrant league bias against your team or the complete lack of class displayed by the team that beat your team. Your team l-o-s-t. Try to deal.

New Rule: If you know the tailgate lot at the stadium like the back of your hand but wouldn't be able to find the campus library without joining a tour group, reevaluate your priorities.

New Rule: It's August. Refrain from posting on your team's message boards that your coach needs to go. At least let him fall behind by a touchdown in September -- or if you really want to be patient, let him even lose an entire game -- before demanding regime change.

New Rule: Try using your real name on a message board. It might be a liberating feeling to stand behind your words, instead of hiding behind the handle "GatrHatr88," or whatever lame nom de cyberplume you choose.

New Rule: The offensive coordinator has feelings, too. Try to remember that.

New Rule: Nobody else thinks his or her team gets enough respect from the media, either. You're encouraged to come up with a new complaint.

New Rule: By all means, have a couple of pregame beers if you want. Try to stop before 12, though.

New Rule: If you didn't stop at 12, remember this: The people sitting around you in the stadium or standing next to you at the urinal don't think you're funny. And they don't want to hold you up when you tip over. Especially at the urinal.

(Aside: colleges might want to study the new Bengals initiative: they have instituted a "jerk" hotline for fans to call to report abusive, profane and intoxicated louts in the stadium to authorities. Then again, considering the arrest record of Marvin Lewis' squad, fans could easily report a bunch of the guys in uniform.)

New Rule: Yes, Notre Dame is different. Get over it. If your school were important enough to get its own NBC contract and thumb its nose at conference affiliation, do you really think it would decline?

New Rule: If you spend more on face paint, clothes in school colors, tailgate accessories and an RV horn that honks the school fight song than you spend on charity, reevaluate your priorities.

New Rule: If you insist on smugly condemning the complete lack of morality and ethics at Rival U when one of its players gets in trouble, prepare a good defense for when one of your team's players screws up the next week. Today's "great kid" could be tomorrow's armed robber.

New Rule: We know you have a brilliant, unique, surefire plan for an NCAA football playoff. Your barber, your bank teller and the kid working the espresso machine at Starbucks have playoff plans too. And Myles Brand isn't interested in any of them. 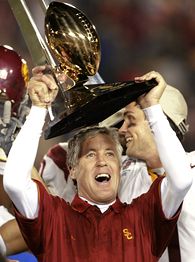 New Rule: USC won a share of the 2003 national title, no matter what the BCS says about the LSU-Oklahoma Sugar Bowl being the title game. Quit being greedy, and quit talking about it three years later.

New Rule: If you're on a voice-recognition basis with a call-in show producer or have your own call-in show persona and handle (like "Wolverine Mark"), reevaluate your priorities.

New Rule: An 0-1 start is not the end of the world, especially with a 12-game schedule. Unless you start 0-1 with a buy game against what was supposed to be a guaranteed chump. Then you can pound the panic button.

New Rule: Before your fan message board mounts an e-mail lobbying campaign to poll voters demanding higher rankings for your school, consider: Is it effective or obnoxious to send out 200 e-mails that all parrot the same "talking points"? And how silly is it for football fans to have "talking points"? After careful consideration of those questions, hit the delete button.

New Rule: If you're over the age of, say, 14, beseeching players as they leave the field for a receiving glove is unseemly and best avoided. I mean, who other than Michael Jackson is going to get excited about a single glove?

New Rule: It is understandable and acceptable to wonder (out loud) why Temple is still playing Division I-A football.

New Rule: If you turn to a sportswriter for guidance on how to be a college football fan, reevaluate your priorities.