LOS ANGELES -- Just when you thought the klieg lights had dimmed and USC had transitioned back to normal football powerhouse status, here came Ricky Bobby.

Actor/USC fan Will Ferrell showed up at a Trojans team meeting last week wearing a NASCAR jump suit, upstaging coach Pete Carroll in his own NASCAR getup. Moments before, Carroll burst into the meeting to announce a training camp surprise: He was taking the team to see Ferrell's new movie, "Talladega Nights: The Ballad of Ricky Bobby," at a campus theater. Then here came Ferrell, in character, stunning the unwitting Carroll and sparking a boisterous group jump-around session befitting the winning pit crew at Daytona. The only thing missing was a celebratory burnout and some sprayed champagne.

(You can see video of it at www.USCTrojans.com, where publicity-shy SC has it prominently displayed.) 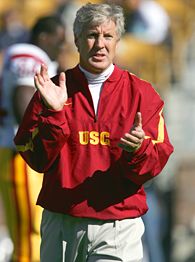 Losing the Rose Bowl, saying goodbye to the past two Heisman Trophy winners and repeatedly swapping paint with controversy clearly didn't chase all the celebrities off the bloated bandwagon. Despite a bumpy offseason that threatened to suck the joy out of Troy, USC still can stake a claim to being America's most glamorous football program.

The question now is whether the Trojans have any business being called America's best football program.

Petey Bobby -- uh, Carroll -- can't wait to find out. After years of having all the answers, he's now full of questions.

"I'm more excited about this year than ever because there's more things to find out about, more stuff, more issues," the excitable 54-year-old boy said at Pac-10 media day. "It's like Christmas, with all those presents under the tree.

"I realize people don't think we're going to be as good. That makes me more fired up."

The beginning of preseason camp at least meant the end to the offseason, and that alone was something to be fired up about at USC. Really, from the 6-minute, 42-second mark of the fourth quarter of the Rose Bowl on, 2006 hasn't been very kind to the Trojans.

At that point they were mere feet from the summit of college football, and a place never before occupied in the sport's history. USC had just scored to go up a dozen on Texas and was closing in on the first national championship threepeat. Immortality was right there for the grasping.

And then it suddenly became as elusive as Vince Young escaping the pocket.

The USC defense caved in, unable to detour Young's flowing feet or deter his crisp throws. The USC offense, unstoppable the entire second half, finally was stonewalled on a fourth down in Texas territory. The 12-point lead dissolved into a mystique-shattering three-point loss.

"It's definitely a bitter pill to swallow," said center Ryan Kalil, "but it's something we've moved past." 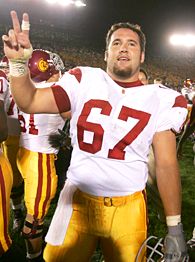 That's Carroll's message as well. If you believe him, being on the losing side of that epic game only lives on in some aching corner of his gut. The residue doesn't linger in a larger sense within the football complex.

"It's a done deal," Carroll said crisply and emphatically. "There's nothing we can do about that.  Do I rub [the game film] in [the players'] face to piss 'em off? No. I'm done with it. If we play the Titans [who drafted Young] next week, I'm going to watch the film. In some regards I'm never over it, but I'm over it in terms of going back and watching the films."

Carroll also says he's over the anarchic April week when it seemed every day brought another damaging USC headline.

There was the story about 2005 Heisman winner Reggie Bush's family allegedly living rent-free or at a reduced rate in a nice house in greater L.A., supposedly financed by a would-be agent. (Update: A joint Pac-10/NCAA investigation is crawling onward, but ultimately might lead nowhere. Word is the involved parties haven't been overly helpful with the NCAA, and they cannot be compelled to cooperate. If the NCAA ultimately is able to determine that its rules were broken, the Trojans could be stripped of some of their glory accrued during Bush's college career.)

There was the story about backup quarterback and high school All-American Mark Sanchez being arrested on suspicion of sexual assault. (Update: No charges were filed against Sanchez, who said he was unfairly accused and has returned to the team without sanction.)

And there was the story about All-American wide receiver Dwayne Jarrett allegedly paying White Castle rent on a Ruth's Chris apartment he shared with quarterback and 2004 Heisman winner Matt Leinart, in apparent violation of NCAA rules. (Update: After initially being ruled ineligible, Jarrett was reinstated recently, ordered to pay more than $5,000 to charity and is eligible for the season.)

"You thought it was never going to stop," Carroll said of that April week.

It did stop, and just in time for the NFL draft, which saw Bush and quarterback Matt Leinart taken in the top 10 picks and 11 Trojans (five of them juniors) picked overall. The loss of star power was so substantial that sports information director Tim Tessalone's stock line this offseason has been, "It's kind of like The Beatles split up."

In their place, at least offensively, comes The Who.

As in, who are these guys?

Actually, Carroll's offensive brain trust of Lane Kiffin and Steve Sarkisian simply had to dust off a few high school All-Americans who have been waiting a few years for meaningful playing time. The defense should be one of the nation's best, especially if Carroll develops a couple of reliable run stoppers and pass rushers up front.

Nobody is counting USC out of the 2006 national title race, but it'll start from outside the top two in the polls for the first time since November 2003. And for the first time in three years the Trojans were not the unanimous preseason choice to win the Pac-10, with California, Oregon and Arizona State also getting votes in a media poll. 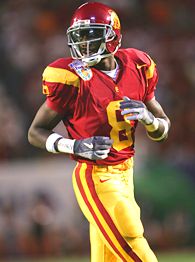 "We've competed on a really high plane for a lot of years in a row," Carroll said. "We've got to see if we can recapture that."

Those are the questions that interest the Trojans far more than inquiries about the off-the-field issues. (Which didn't stop completely last spring. Defensive back Brandon Ting reportedly tested positive for steroids before he and his twin brother, Ryan, surprisingly left the USC team in late July.)

The players believe that if all that turbulence is an issue, it actually could be a positive one. It could wind up being a blessing.

"Those kind of situations almost make us tighter," Kalil said. "You think people are out to get you -- and sometimes they are, when you're a top program -- but it's going to make us be more accountable to each other. We're going to make sure guys know the spotlight is on them.

"Ultimately, it's not going to matter on game day. Nobody's going to break us."

Unbroken is one thing. Unscarred is another. Unbeaten is something else entirely.

"There's not going to be an enormous impact on any individuals or on the program," Carroll said of the offseason issues. "Mark's deal was ridiculous. It was a horrible thing for everyone to have to deal with. He was really out there. It was very difficult for everyone who loves the Trojans.

"But all the while, we had a sense that all these issues were going to be OK."

He's right in the sense that none of the issues has resulted in a mushroom cloud -- but the cumulative effect of that and other off-field problems makes you wonder whether Good Time Pete is sweating all the details that make college coaching different from the NFL. Disciplinary authority can't be delegated, yet sometimes you wonder whether Carroll finds it interferes with the zone blitzes and the motivational stunts.

If you combine the loss of invincibility against Texas with the loss of innocence since April and the loss of all that talent to the NFL, USC could be facing an abrupt end to the halcyon days from 2002-05, when it went 48-4.

Then again, it faced a remarkably similar situation in 2003.

"A couple years ago we lost Carson Palmer and Troy Polamalu and people were saying, 'What are we going to do?' " Kalil recalled. "Then here comes this lanky kid out of Orange County, and he's winning the Heisman Trophy and national championships." 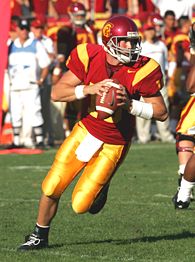 The lanky kid was Leinart, of course, who merely pushed himself into the Greatest College Quarterback Ever argument by the time he was done. Now comes John David Booty to see whether he can pull a Leinart.

The spotlight finally returns to Booty, an all-everything coming out of Shreveport, La. He backed up Leinart the last two years, then missed spring practice after back surgery. He says he's feeling fine now.

"I'm back to full-go and feeling better than I have since I can remember," said Booty, whose Southern drawl replaces Leinart's Cali cool. "No pain, no stiffness. I don't really remember what it was like to have a normal back."

Nor does he remember what it was like to play in a semi-normal football atmosphere. After three years of immersion in GlamourBall, Booty is anxious to see whether USC can rediscover the game's gritty roots.

Easier said than done when Ricky Bobby is commuting from Hollywood to bust in on your team meetings.