How competitive does this Sept. 2 matchup sound to you?

Team A's profit after expenses that year was $39.3 million, making it the most lucrative program in the nation according to the survey. (Twenty-three schools did not submit data.) Team B ran a $1.8 million deficit, 152nd in the nation. 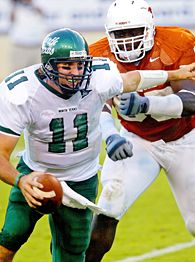 Team A is Texas of the Big 12, the defending national champion. Team B is North Texas of the Sun Belt, which went 2-9 last year and ranked No. 161 in the final Sagarin Ratings. They're both Division I-A programs and both from the same state -- and that's about where the similarities end.

The fiscal disparity helps explain why the game is a guaranteed mismatch, played for a guaranteed payout of $400,000 from the Longhorns to the Mean Green. It's the third installment of a four-game series played every other year -- all in Austin. Combined score of the games in 2002 and '04: 92-0.

"I don't think coach (Darrell) Dickey would put a team on that bus and go down there if we didn't think we had a chance to win," North Texas athletic director Rick Villareal said.

Brave talk and blind optimism are your best allies when you're a member of the Sun Belt Conference, a six-year-old football league that forms the cold, hard basement of Division I-A. This collection of former I-AA dreamers and vagabonds is still trying to gain some traction in the uphill climb to respectability.

Here's how bad 2005 was for the Sun Belt: its teams played 27 nonconference games against I-A opponents last year -- and lost 26 of them. The league finished with no team ranked higher than 113th by Sagarin's computer. And the league office in New Orleans took a pounding from Hurricane Katrina. 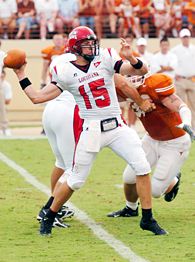 This year, if you average the ranking of four preseason magazines that rate all 119 I-A teams, only Louisiana-Lafayette was in double digits at No. 94. So talk about beating Texas or competing with the power elite only goes so far.

"If people want to walk around and say, 'Our goal is to win a national championship,' well, that's great," said James "Boots" Donnelly, the former coach and athletic director at Middle Tennessee State who oversaw the Blue Raiders' move from I-AA to I-A. "But you need realistic goals. You're not going to win a national championship in my lifetime, or God's lifetime. That's just the truth."

This also is the truth, no matter how bleak the numbers: The league has improved over the last five years. It reorganized as a more geographically sensible conference last year, shuttling Idaho, Utah State and New Mexico State to the Western Athletic Conference and adding Florida Atlantic and Florida International. It's putting 36 games on regional television this year and has put more butts in seats at home stadiums. And almost every school has made a significant football facility upgrade in recent years.

"That tells me their presidents and board of trustees have confidence in the way things are going," commissioner Wright Waters said. "You don't spend millions of dollars if you don't think it's going to work."

But there clearly is much work to be done. The budgets are smaller here, the beatings are worse. Most schools in the league still are losing a lot of games and a lot of money. They're as far removed from the BCS bowls as possible while still saying they're playing big-time football.

"The conference is looked upon as probably the worst conference in I-A," said Donnelly, now a talk-radio host on the ESPN affiliate in Nashville. "That's just the way it is until we get better, and that's going to take a few years.

Before that day comes, Sun Belt teams will spend much of September taking fearful beatings in exchange for plump guarantee checks that help keep shoestring athletic budgets from snapping.

It's ugly out there for teams putting on I-A airs. But in the Sun Belt, at least, the number of guaranteed maulings used to be greater. 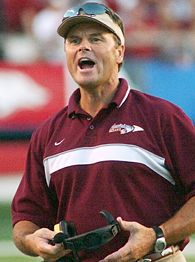 Most of the league's teams are gradually weaning themselves off the guarantee teat, instead trying to schedule more home contests and put more fans in the stands. That has become the Sun Belt's strategic plan for pulling itself up off the bottom.

Waters wants his teams to veer away from playing up to eight road games a year. Only ULM plays that many this season, and three schools actually play an even slate of six at home and six on the road.

"I like what our ADs have done as far as scheduling," Waters said. "When we started this in '01, schools balanced their budgets by playing guarantee games. Now we're much more concerned with playing home games and trying to sell tickets."

By attendance numbers alone, the Sun Belt schools have made significant progress. Comparing last year's figures to 2001, four league schools have increased their average home crowds by more than 70 percent: Florida International is up 99 percent, Louisiana-Monroe 91 percent, Louisiana-Lafayette 86 percent and Arkansas State 71 percent. The only school that's down is Middle Tennessee, which dropped 19 percent during a 4-7 2005 season that saw coach Andy McCollum get fired.

If the 2005 attendance numbers are an accurate indicator, the Sun Belt has surpassed both the Mid-American Conference and the Western Athletic Conference in terms of stability.

The NCAA's I-A Mendoza Line for average attendance is 15,000. Programs that fall short of that, in actual or paid attendance, over a rolling two-year period will receive a letter of non-compliance from the NCAA. Schools then enter a 10-year window during which they must meet the attendance standard or be placed on restricted membership -- which could take away their bowl eligibility.

Only one Sun Belt school was below the NCAA's 15,000-fan line last year: Louisiana-Monroe, which averaged 14,617. The MAC had six schools fall short (including the bottom three: Buffalo, Kent State and Eastern Michigan, all of whom averaged fewer than 9,000 fans) and the WAC had three.

One way to pad the attendance stats is to move games to a more appealing off-campus site -- and sell the extra tickets to your competitor. Arkansas State will play Oklahoma State in Little Rock Sept. 9, and Middle Tennessee will play Louisville in Nashville at the Titans' Adelphia Coliseum Oct. 6. Both games are likely to draw more fans of the visiting team than the home team.

A victory in either of those games would be exactly the kind of statement win the Sun Belt badly needs. To date, the league has had two signature victories: Troy shocked Missouri 24-14 in 2004 on national television, and North Texas beat Cincinnati 24-19 in the 2002 New Orleans Bowl, which gives an automatic bid to the Sun Belt champion.

Problem was, neither win started any kind of snowball effect. Troy turned around and lost to New Mexico State the following game after beating Missouri. And Sun Belt champs have gone 0-3 in the New Orleans Bowl since North Texas' win.

"We have to beat out-of-conference opponents," Villareal said. "Those wins give your league more credibility."

For Villareal's school, just staying on the field against Texas Sept. 2 would be a start.