First things first, TGIF. Thank God It's Football. The Dash was one more pickoff throw to first base away from combustion during the dead months between kickoffs -- but purgatory is over now. 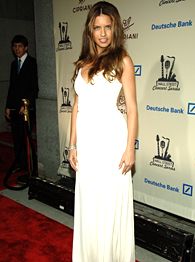 Now it's blocking, it's tackling, it's everybody on their feet for the opening kickoff. It's college boys in ties and college girls in dresses in the South, it's tailgate cornhole games in the Midwest, it's USC song girls (2) in the West and it's JoePa (3) running out the tunnel like a young buck in the East. It's dotting the "i" in Script Ohio (4), it's smooching your girl after touchdowns in College Station, it's caressing Howard's Rock (5) in Death Valley.

And, of course, it's gratuitous pictures of Dashette Hall of Famer Adriana Lima (6). Just because The Dash cares.

So, yeah, we've got our game faces are on here at dotcom. We're slingin' copy that's raw like The Clash. Tasty like Who Hash. Sexy like Wannstedt's stache (7).

Strike up The Dash.

In stadiums nationwide this week, fans young and old will stand up and sing, in proud and slurred unison, some of the most leaden and nonsensical songs in the history of music. Stuff even Simon Cowell could not pan hard enough.

They're college fight songs -- universally old, almost universally bad. (For every Michigan song, there are a dozen that just stink.) But we sing along anyway, a traditional bonding element for members of each football tribe. It is, strangely, a beautiful thing.

The Dash spent some offseason time scouring the ESPN College Football Encyclopedia (if you're a serious fan, your life is a meaningless charade without it -- and that's not just a corporate plug). Included in this book that is the weight of a small child are the lyrics of all 119 fight songs. They're all the more tortured on the bare page, unaccompanied by a catchy tune.

At the very least, the lyricists took the term "fight song" literally. Eighty-nine out of 119 use some form of the word "fight" -- many of them over and over. There also is a good deal of spelling, none of it more challenging that the school's nickname.

For going above and beyond the English language -- all the way to gibberish -- in search of inspiration:

For unintentionally comedic use of the school's mascot/nickname:

Cal (15): "BIG C"
Golden Bear is ever watching
Day by day he prowls
And when he hears the tread of lowly Stanford red
From his lair he fiercely growls
(gr-rr-rah, gr-rr-rah, gr-r-r-r-r-r-rah!)

Like all the jolly good fellows, I drink my whiskey clear
Oh, I wish I had a barrel of rum and sugar three thousand pounds
A college bell to put it in and a clapper to stir it around.

New Mexico State (18): "Aggies, Oh Aggies"
And when we win this game
We'll buy a keg of booze
And we'll drink to the Aggies
'Til we wobble in our shoes
(The NMSU students must have been depressingly sober last year watching their team go 0-12.)

For not overburdening simple minds:

(At the opposite end of the spectrum is "Utah Man" at Utah (22), which has a 19-line stemwinder of a song, complete with this macho stanza: "We're up to snuff; we never bluff/No other gang of college men/dare meet us in the muss." Indeed.)

Washington (23): "Bow Down To Washington"

The boys are there with bells,
Their fighting blood excels
It's harder to push them over the line
Than pass the Dardanelles
(UW students can earn extra Dash credit for identifying that as a reference to the Straits of Dardanelles, a waterway off the coast of Turkey that was heavily fortified during World War I.)

And the all-time favorite:

Gleeful contrarian Stanford (25), which punted its traditional fight song in favor of "All Right Now" by Free. Perfect for a school that mocks the standard marching band concept as well.

Scheduling For Fun And Profit
The Dash reminds everyone in Chinstrap Nation how important a role your athletic director and the league office can play in having a boom or bust season. Last year scheduling played no small part in the resurgences of Penn State (five home games in the first six and seven overall), Alabama (four home games in the first five and seven overall), Nebraska (first five at home) and UCLA (didn't leave Southern California until its sixth game).

Here are five teams set up to make a run:

Florida State (26): The Seminoles play eight home games, including getting Florida and Clemson in Doak Campbell Stadium. (Problem is, the 'Noles have lost one home game each of the last five years, all of them as substantial favorites.) They open on the road at Miami, but what better time to play the Hurricanes than when they have four players suspended for the opener? The other three road games are against teams that went a combined 13-21.

Auburn (27): The Tigers also get eight at home, including SEC heavies Florida, LSU and Georgia. They could be favored in all four road games: Mississippi State on Sept. 9, South Carolina on Sept. 28, Mississippi on Oct. 28 and Alabama on Nov. 18. Only potential pitfall is the lack of a bye week, which could catch up with a wounded team in a 12-game schedule.

West Virginia (28): Mountaineers don't play a I-A opponent with a 2005 winning record until November, when they visit Louisville. If they're not 7-0 by then, something went badly wrong.

Kansas State (29): What better way to break in a rookie head coach than six home games in his first seven? Drawing Baylor and Oklahoma State as two of the three opponents from the Big 12 South doesn't hurt, either.

Texas A&M: Last two years the Aggies opened on the road and lost, at Utah and at Clemson. This year they start with The Citadel, Louisiana-Lafayette, Army and Louisiana Tech, then get Texas Tech at home, too. Spending the entire month of September in Texas could help Dennis Franchione's job security.

And now five that are set up to fail:

Northwestern (30): Wildcats play potential trap games on the road at Miami of Ohio and Nevada. All four Big Ten road games are against '05 bowl teams, too. Don't look for a repeat of Northwestern's winning road record from last season.

LSU (31): Sure, every nonconference game is at home. But when the SEC road schedule sends you to Auburn, Florida and Tennessee, you'll take every home game you can get.

Colorado (32): Few big-time schools still schedule as ambitiously as the Buffaloes. After opening against Montana State, they play three straight '05 bowl teams: bitter rival Colorado State on a neutral field in Denver; Arizona State in Boulder; then Georgia between the hedges. New CU coach Dan Hawkins got a taste of that last year when his Boise State team was pulverized 48-13 by the Bulldogs.

Akron: The Zi--ips come off their first bowl game since 1976 and proceed directly into five road games in their first six, including three in a row on the road to start.

Louisiana Tech (33): Bulldogs open at Nebraska, come home to play Nicholls State and then go at Texas A&M, at Clemson, at Boise State in succession. They have another three-week road swing later in the year, going to San Jose State one weekend, North Texas the next and then Hawaii. The eighth and final road trip is to Las Cruces, N.M., in December.

Baylor will upset TCU on its way to a 6-6 record and its first bowl bid since 1994. Despite a career record that's 17 games below .500, coach Guy Morriss (34) will be courted by other schools who have seen him take two perennially awful teams -- the Bears and Kentucky -- to their best records of the 21st century. 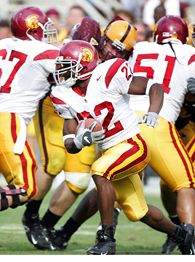 The Big East (35) will open 6-1, with the lone loser being Syracuse at Wake Forest. A league many wrote off as irreparably damaged two years ago will have a landmark season: West Virginia will be No. 1 and win the national title, spurring Morgantown couch fires visible from space; Louisville will be in the top 15, perhaps the top 10; and Rutgers, South Florida, Connecticut and Cincinnati all will be surprisingly competitive. Pittsburgh still will be a disappointment, and Syracuse remains awful.

Desmond Reed (36) will make his return in a big way. The USC running back blew out a knee and suffered nerve damage in his right foot last year at Notre Dame, but he's back at full speed and will return punts against Arkansas on Saturday in Fayetteville. Don't be surprised if he takes one to the house.

Penn State (37) will struggle out of the blocks against Akron. One line on this game has plummeted by a full touchdown, from 23½ points to 16½ -- perhaps in respect to 17 returning starters for Akron, perhaps noting that the Nittany Lions return only nine. But it's hard to envision the Zips have an answer for receiver/kick returner Derrick Williams.

Fresno State's Dwayne Wright (38) will rush for 200 yards against Nevada in his first action since early in 2004 after suffering knee injuries. Wright will be Fresno's fifth straight 1,000-yard rusher, while the other FSU -- Florida State -- stunningly will go a 10th straight season without a 1,000 yard rusher by criminally under-using the talented Lorenzo Booker.

Putting Out An APB For
One of only two defensive players to finish in the top two in Heisman Trophy voting in the last 45 years. One, you know: 1997 winner Charles Woodson of Michigan. The second? Hugh Green (39), the devastating defensive end for the Pittsburgh Panthers. Green was a close second to South Carolina's George Rogers for the Heisman in 1980, then went on to star for the Tampa Bay Buccaneers. If you have information about Green's current doings, please apprise The Dash.

Point After
When thirsty almost anywhere in this great land of ours, it's easier than ever to find a Colorado microbrew that improves your quality of life -- and the quality of your tailgate. The Dash recommends either a Fat Tire (40 a) ale or a Hazed and Infused (40 b) ale by Boulder Beer. Intensive summer research revealed that both go splendidly with the official food of football (and The Dash): grilled meat.