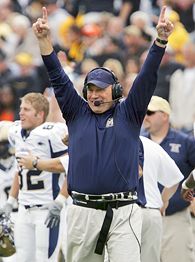 Not only was this upset in triplicate significant, but none of the three were decided by a touchdown or less. Richmond beat Duke (2) by 13, Portland State beat New Mexico (3) by 11 and Montana State beat Colorado (4) by nine. Only the Lobos gained more yards than their opponent. None of the three I-A schools -- with more scholarships and allegedly more depth with which to wear down the I-AA guys -- scored a point in the second half.

Nice use of that 12th game to schedule an easy win, boys. When you've lost to teams nicknamed the Spiders, Vikings and Bobcats, respectively, you know you've screwed up.

Given the results, it's time for Duke to drop the sport, New Mexico to drop any hope of a sixth straight winning season and Colorado to drop and give The Dash 20.

Bucks-Horns 2.0 -- Follow The Money
There is absolutely nothing small about Texas (5) vs. Ohio State (6), the Saturday sequel to the Game of the Year in 2005. 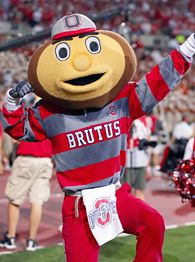 And, absolutely uncoincidentally, big money in both athletic department coffers. The biggest in America, in fact.

In 2005-06, Ohio State became the first athletic department to rake in more than $100 million in revenues. Texas' final numbers for that year haven't been reported yet, but one published report estimated revenues at $94 million for the Longhorns.

The proof of success is in the hardware, and both teams have plenty of that. But those figures got The Dash wondering how much a victory costs in college football.

So The Dash put on a green eyeshade and crunched some numbers, using expenses from the 2004-05 budget reports schools submitted to the NCAA -- reports that were acquired and pooled into a database by the Indianapolis Star. Using those financial figures and the records of all Division I-A teams for the 2004 season, The Dash determined how much each school spent per victory that season. Some of the more interesting results, by conference:

(Duke and Wake Forest did not release budget data.) 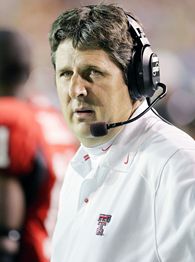 (Oklahoma, Oklahoma State and Baylor did not release budget data.)

(Pittsburgh and Syracuse did not release budget data.)

(Penn State and Northwestern did not release budget data.)

(Stanford and USC did not release budget data.)

(Vanderbilt did not release budget data.)

The Rest
Spendy: Central Florida (24). Expenses: $5.2 million. Victories: 0. Cost per victory: Really high, because there were none. Red ink or black: The Golden Knights ran a $3.1 million deficit on football. 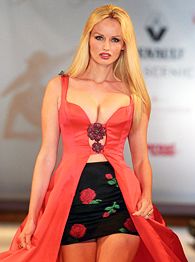 And, of course, no amount of money is too much to spend on a Saturday with Adriana Sklenarikova (26), who accepts the Dashette handoff from another Adriana (Lima) and takes it to the house. (In keeping with two years of time-honored tradition and outright gimmickry, all Dashettes must come equipped with first and last names that end in "a." Among other attributes.)

Opening week was time to see which teams really put their offseason to good use, and which teams were just talking the talk. Whose team was ready to play in a sport where slow September starts are not an option? Whose wasn't? The Dash saw definitive answers in four head-to-head matchups:

Florida State-Miami (27). The Seminoles had four defensive players picked in the first round of the 2006 NFL draft, yet Mickey Andrews' D still suffocated the Hurricanes, shutting them out in the second half. Of course, it helps when the opposing team's halftime adjustments consist of rearranging the deck chairs on the Titanic. Miami looked like a poorly coached team, and never more so than its last two gaffe-ridden possessions. The Dash has seen more poise in a kindergarten fire drill than the Canes showed in the final minutes. Not good, Larry Coker. Not good.

Tennessee-California (28). The Dash admittedly drank the Kool-Aid on the Golden Bears, and has been wondering why since shortly after kickoff Saturday in Knoxville. Apparently Cal drank it, too, and got good and drunk. And here came the hangover. The lasting thing learned from this game is that the real quarterback guru is David Cutcliffe, whose repair job on Erik Ainge's psyche appears ahead of schedule. The overrated quarterback guru is Jeff Tedford, who appears on his way to a second successive season of incompetence by committee at the most important position on the field.

USC-Arkansas (29). Indulge The Dash and remind it which team was opening on the road after replacing 11 NFL draft picks, and which team was opening up at home with 19 returning starters. By the time this 50-14 face job was over, Pete Carroll was whistling zip-a-dee-doo-dah and Houston Nutt was hoping that a true freshman quarterback can save his job.

Louisville-Kentucky (30). The Cardinals were clearly sitting on go for weeks, exploding out of the gate for 31 unanswered points against the rival Wildcats in 26 minutes, on their way to scoring more than 40 points for the 11th straight home game. That was retribution for the pop-off of the preseason, which came from, of all places, the pointy head of a university president. In a spectacularly silly attempt to fire up an audience of Kentucky fans at an event in Louisville, school prez Lee Todd publicly suggested that the Cards are all hype. "Some places overmarket and underperform and others undermarket and overperform. You can decide which [applies to Louisville]," Todd said. Only problem is, Todd presides over a football program that has underperformed like few others over the past half century -- and that continued Sunday night with a 59-28 seal clubbing. Biggest single reason (out of many) why Rich Brooks is closing in on goner status at Kentucky? He's 0-4 against Louisville, has been outscored by 80 points and has not led against the Cardinals for a single second. Buh-bye.

Hands Team
By the time the final pass was dropped Monday night by a skillet-handed Miami receiver, The Dash had had it. The aggravation of opening week was watching throw after throw clatter off the chest of open receivers, which spurred The Dash to formally invite every ball dropper to check video of Louisiana Tech's Johnathan Holland (31) against Nebraska. 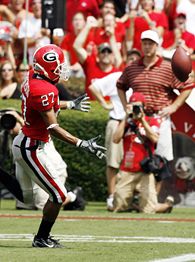 All Holland did was spear a long bomb left-handed while in full stride to the end zone -- then perform a nifty jump into a row of end zone seats. It might not be Tyrone Prothro (32) trapping one on the back of a Southern Mississippi DB, but it's close. Strong early candidate for Catch of the Year.

Meanwhile, The Dash also suggests video study of Leon Lett (33) in Super Bowl XXVII for Georgia's Mikey Henderson (34). Henderson joins the rogues' gallery of guys who prematurely celebrated a touchdown and had it blow up on him.

He was holding the ball out short of the goal line on a punt return against Western Kentucky, only to have the leather object squirt out of his hands and through the end zone for a touchback. Henderson atoned on his next touch, returning another punt to the house and actually hanging on through the goal line this time. But to paraphrase John Heisman (35), better to have died as a small boy than to repeat that fumble, Mikey.

Reader E-mail Of The Week
With no small amount of trepidation, The Dash is ready to open its forum to a select reader each week, whose e-mail actually made the curmudgeonly Dash smile. First up is Daniel from NoDak (36), who wrote in response to this season's opening column about school fight songs and Colorado microbrews:

Also, I was surprised that the Cal Poly fight song wasn't in binary code.

Next week, you should look into what school songs could be made into drinking songs. i.e. "The Beer Song" is put to the tune of Iowa's school song.

The Beer Song
"In heaven the is no beer!
That's why we drink it here,
And when we're gone from here
Our friends will be drinking all our beer."

I learned this song at the University of North Dakota while in the band  drinking my friends' beer (and playing the tuba). Careful, drinking bands in college sound WAY better. I have a bunch of friends who used to be in the U. Florida band, they're such a bunch of lushes. And they say, they were sauced most of the time.

(It should be noted that Daniel from NoDak's e-mail was received around 5 a.m., which makes The Dash wonder whether it was written after a few too many Fat Tires with the other band lushes.)

Putting Out An APB For
Former Florida wide receiver Chris Doering (37). One of the stars of the Steve Spurrier Fun 'n' Gun, Doering made second-team All-America status with the Gators and ranks among the school's all-time leaders in touchdown catches (31), receptions (149) and receiving yards (2,107). And he might be the only player ever to score three touchdowns in a single drive (the first two were called back on penalties) in a game against Georgia. Anyone with information on one of Danny Wuerffel's favorite targets, please apprise.

Meanwhile, The Dash is pleased to report that last week's subject, former Pitt defensive end Hugh Green (38), is alive and well and living in Fayette, Miss., not far from his hometown of Natchez. According to Pittsburgh sports information director E.J. Borghetti, Green is involved in several charitable endeavors, chief among them the Ronald McDonald House and Opportunity Village, which caters to physically handicapped children. Green also is a coordinator of an annual charitable event called Legends Big Game Party in Las Vegas.

Point After
When hungry in Fayetteville, Ark., The Dash recommends Boi de Ouro (39), a Brazilian steak place that will make every attempt to stuff you into a near-coma with delectable grilled meat. (The menu includes pork, which apparently doesn't bother fans of the Hogs.) If you leave the joint without feeling like Fridge Perry, it's on you. The engaging bar staff also will pour you a Brazilian black beer called Xingu (40). It's the color of Guinness but not as filling -- and that's important when you're trying to gorge yourself on grilled meat.