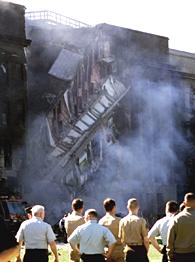 They're phantom smells, five years old, but that doesn't make them any less real to Mark Dodge. Same with the nightmares, which are less frequent now but no less jarring.

"Certain nightmares will always probably be there," Dodge said.

When you have been where Mark Dodge has been, seen what he has seen, smelled what he has smelled, you don't forget. When you have bagged incinerated bodies and carried them to a morgue truck, the experience lingers. When you have spent days raking through piles of debris for human remains -- sifting out the teeth and bones -- it stays with you.

"I don't think raking will ever be the same for him," said Dodge's mom, Toni Inserra.

On Sept. 11, 2001, 20-year-old Mark Dodge was at the Pentagon when it was struck by the hijacked American Airlines Flight 77. Shortly thereafter, Dodge's 3rd U.S. Infantry Regiment was part of the response team.

That's the perspective gained from going through hell. Monday, on the fifth anniversary of that tragedy, Mark Dodge believes he is a better man because of it. A stronger man. A more appreciative man.