AUSTIN, Texas -- There are 10 games left before we know for sure, but it's possible that a national championship season started coming into sharp focus on a sweaty Saturday night in Austin.

Ohio State's 24-7 punishing of defending champ Texas might do for the Buckeyes what the game in Columbus last year did for the Longhorns. Texas bounced on that September springboard in the Horseshoe and it propelled Mack Brown's team all the way to Pasadena. We'll see whether Ohio State gets the same lift from this game. 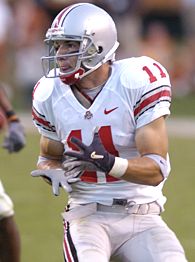 There were similarities. The stakes were towering, the game in prime time, the hype immense. The visiting team joyously sang the school song behind one end zone with its celebrating fans, while the home fans sullenly filed out. The quarterback wearing No. 10 in white was the best player on the field (last year Vince Young, this year Troy Smith). The losing team had a playing-time controversy to stew on (last year Smith did not start after serving a two-game NCAA suspension, this year Texas suspended starting cornerback Tarell Brown). And an underappreciated receiver played the hero (last year Limas Sweed, this year Anthony Gonzalez).

Will there be a similar boost in confidence for the winner -- a boost that carries it all the way into January?

"That's always the hope," said Gonzalez, who had eight catches for 142 yards and a touchdown. "But there's still 10 games left in the season. This isn't easy.

"I said after the Michigan game last year, winning the Big Ten is not easy. I can only imagine that winning a national title is twice as hard."

It ain't easy, and there are some large land mines in Ohio State's path in the coming months -- notably Iowa on the road Sept. 30 and Michigan Nov. 18.

"There's that one at the end," Gonzalez said of the annual blood feud with the Wolverines. "I don't care what happens, that's the hardest game."

It's true that this game wasn't terribly hard for Ohio State to win. There are legitimate questions about how good Texas is without Superman in Cleats at quarterback.

That VY magic that transformed the Horns from a program that couldn't win the big one into the program that won 'em all? It's gone. Without it, Texas looked talented but flawed Saturday night. 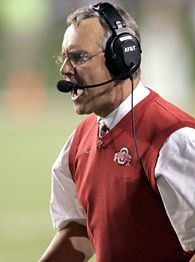 The Buckeyes did not have to be great to beat Texas soundly; they merely had to be solid. Many of the questions about Ohio State's rebuilt defense were answered in this game, but the Longhorns bailed out the Buckeyes with some critical errors. And OSU's running game was weak, producing just 79 yards on 29 carries.

Bottom line: We still don't know whether Jim Tressel's team has greatness in it.

But nobody else has gone into Austin and won by this much this century. Having accomplished that, Ohio State can go down the road to Arizona with as much optimism as any team in America.

"It's a big confidence factor to beat a team like this," said cornerback Malcolm Jenkins. "As long as we keep getting better and take it week by week, we could be there."

There was no better place on Planet Chinstrap to be Saturday night than here in Austin. This was No. 1 vs. No. 2, and it attracted more star power than the ESPYS. The list of legends was longer than Bevo's horns: Lance Armstrong, LeBron James, Jack Nicklaus, Emmitt Smith, Earl Campbell, Archie Griffin, Eddie George and Cris Carter, to name a few.

If you're scoring at home, there are seven Tour de France yellow jerseys, 18 major titles, three Super Bowl rings, four Heisman Trophies and a whole lot of Nike dollars in that group.

Unfortunately -- and perhaps inevitably -- the game could not live up to all the buildup. Bucks-Horns II had none of the drama of Bucks-Horns I.

The easiest explanation for the drama deficit is the quarterback position.
Colt McCoy is a tough guy and a fine player for a redshirt freshman. But this was hardly the spot for a kid playing his second college game to become a hero. Ohio State's edge at the most important position was every bit as pronounced as the final margin.

Smith simply continued the magnificent roll he began at the end of 2005. He hasn't thrown an interception since November, and in his last four games he's completed 70 percent of his passes. He's gone from a scrambling type with sketchy accuracy to a master of the position -- and, not coincidentally, he's pushed himself to the front of the Heisman Trophy race. 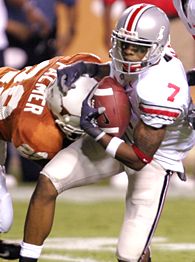 Of course, it helps to have the scariest wide receiver in America to throw to. That would be Ted Ginn Jr., who had two explosive plays Saturday -- a 46-yard catch-and-run in the first quarter and a 29-yard touchdown catch to end a sharp two-minute-drill drive just before halftime.

But while the eyes of Texas were upon Ginn, they should have at least stolen a glance at Gonzalez to see what he was up to. The hands of Texas' defensive backs rarely touched him.

Gonzalez's self-deprecation is as polished as his route running. He's not your typical diva wideout.

He's got a shaved head, less as a fashion statement than as an admission of baldness. "If I could [grow my hair], it would be long, I'd put it in a ponytail and it would be jet black," said Gonzalez.

Before Saturday, he'd never had a 100-yard receiving game. And before a couple of years ago, his future didn't figure to include any thoughts of playing pro football.

"I had a dream to go to Stanford law school," Gonzalez said. "I looked at my GPA and figured I'd better start getting 4.0s."

So he did. Now he has twin dreams -- law school and the NFL.

But first things first. A national championship chase is under way in Columbus, and got a powerful boost here.

"It means a lot," Gonzalez said. "It probably doesn't mean as much as everyone thinks it does."

We'll know for sure 10 games down the road.